Since the beginning of the series, there’s been a vibe. It’s been overshadowed by spycraft and other flashier aspects of the story, but it’s been there. And by “it,” I’m speaking of the love triangle vibes between Eve, her husband Niko, and Villanelle.

Of course, as Konstantin points out, it’s dangerous to be the object of Villanelle’s affection. Like the titular caterpillar, she can’t get enough. She will consume and consume until there’s nothing left.

But if it’s dangerous to be the object of her affection, it’s even more dangerous to be an obstacle blocking said object. But Niko doesn’t know that yet. There are little hints–someone keeps calling in complaints about him–but he doesn’t grasp what he’s up against. He doesn’t even know he’s in the game. 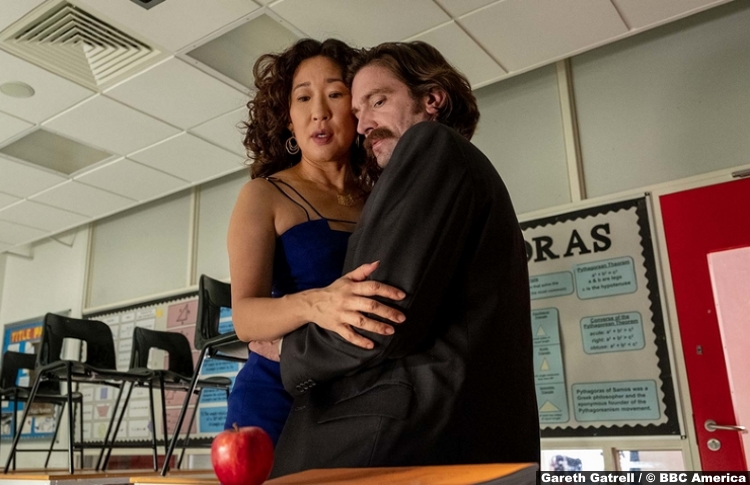 Eve, being more experienced with Villanelle, picks up her hints more readily. That, of course, plays right into Villanelle’s hands. Having done the supportive spouse thing and gone with Niko to a function at his school, Eve is startled to find an apple in his classroom. Since poor Gabriel was also holding one, Eve can’t help but think it’s a calling card. Niko, on the other hand, is frustrated–“…the one time you came to support me at my job, you were able to somehow miraculously make it about you and your job.”

He dismisses her, since he believes she clearly doesn’t want to be there. And it all works out just as Villanelle must have planned. (While the apple is subtle, a disguised Villanelle’s encouraging teacher Gemma’s (Emma Pierson) crush on Niko is not.)

Things are actually working out well for Villanelle on a number of fronts. While she’s still chafing under the handling of Raymond, she does manage to get away with charging a bunch of shit to his company credit card. (And thank goodness, because that Chloe jacket is divine.)

But frivolity isn’t her only victory. Knowing that no one in their orbit knows Villanelle better, Eve makes a risky deal with Konstantin. In exchange for Villanelle’s location, she’ll find out where his family is–after his assumed death, they were secreted away as Protected Persons. 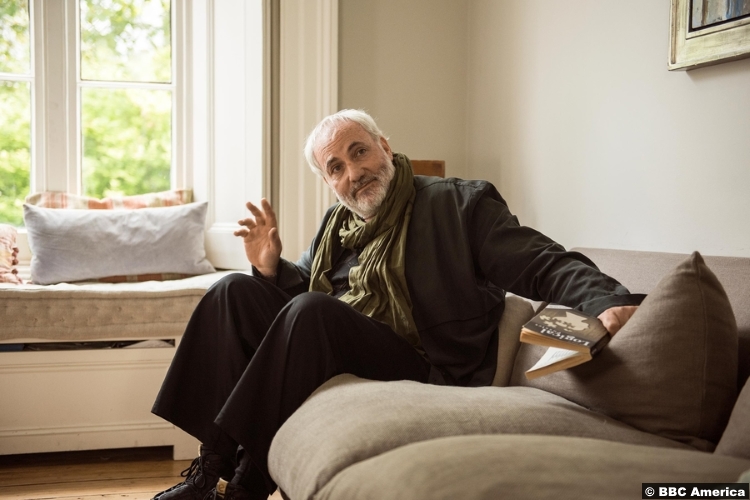 This is a terrible decision by Eve on a number of levels. Would you like me to enumerate them? My pleasure. Number one, she’s not even supposed to be working on Villanelle–she’s supposed to be finding the ghost. Number two, she doesn’t even get the location herself. She pressures Kenny into doing it, which makes him feel bad, because he thinks he’s compromised his mum’s plans. Number three, they lose all leverage over Konstantin.

And by that, I mean they lose Konstantin. It’s really baffling. Like, did Eve honestly think that Konstantin was just going to sit around and chill with them once he knew where his wife and very spirited daughter were?

Nah. It’s unclear if he makes contact with them, by the way, but he does drop in on his very spirited surrogate daughter. Villanelle is ecstatic to see him, but as always, guarded with her feelings. Jealousy is a potent motivator for her, so why wouldn’t she assume it’s the same for others? (“You sound like Raymond, who I love, and miss very much.”)

Konstantin, though, is just a wealth of info this episode. Raymond, he informs us all, is actually paid to terminate contracts. In other words, he’s going to put Villanelle down. But there’s another option.

Actually, there are no other options. Konstantin doesn’t just hold info–he also holds all the cards. MI-6 is on the way, so unless Villanelle wants to be captured, it’s “come with me if you want to live” time. Villanelle, always a survivor, is out the window by the time Eve figures out what room she was really in. 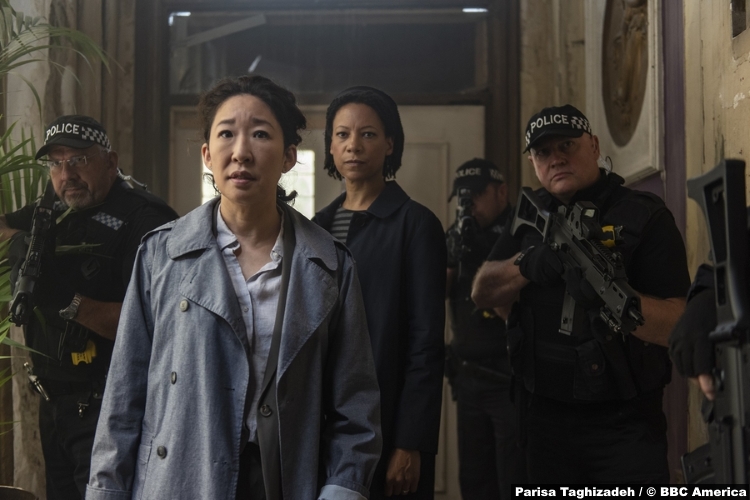 But hey, Eve still has the lipstick Villanelle surreptitiously dropped into her bag at the school function. Named “Love in an Elevator,” it’s a cheeky reference to a murder Villanelle pulled off earlier in the episode. A lot of things about that scene forced me to suspend my disbelief, including the idea that Villanelle and/or a cheap necktie could be that strong.

But nothing forces me to suspend my disbelief like the final scene with the lipstick. It is well-established both that Villanelle is a creative murderer and that she has used cosmetics as weapons before. So why why WHY on God’s green earth would you apply a lipstick she gave you? I mean, even if it didn’t come from her, you randomly it found in your bag.

Whew. Anyway. It presumably did come from her, because there’s a razor in it. And now she’s stabbed you back. Love hurts.

9/10 – I was going to say that I really liked this episode despite Eve’s incredibly hard-to-fathom behavior. But her behavior isn’t really that hard to parse. She’s obsessed with Villanelle, to the point that everything in her life is receding. And it’ll keep receding until Villanelle is the only thing left, the still point of the turning world. I guess it turns out that she doesn’t need Villanelle to consume everything after all. Eve’s going to do a bang-up job of that herself.