In all of Villanelle’s interactions with Konstantin, save the last one, he remains bemused with her and her antics. At the start of this episode, the season finale, we get a big hint why.

Having failed to force his hand with the threat of violence against him in the last episode, Villanelle pivots toward another target: Konstantin’s daughter Irina. She’s cheeky, she’s clever, and she’s kinda annoying. In other words, she’s like a miniature Villanelle.

At first, it seems like Villanelle has her for insurance purposes because she thinks she’s still got that passport and money stashed in the coat she sent to Anna. See, despite my suspicion last week, I don’t think Anna ever knew that coat was also a hiding place. I think she kept it for the same reason she kept the letters. And that reason is, it’s complicated. 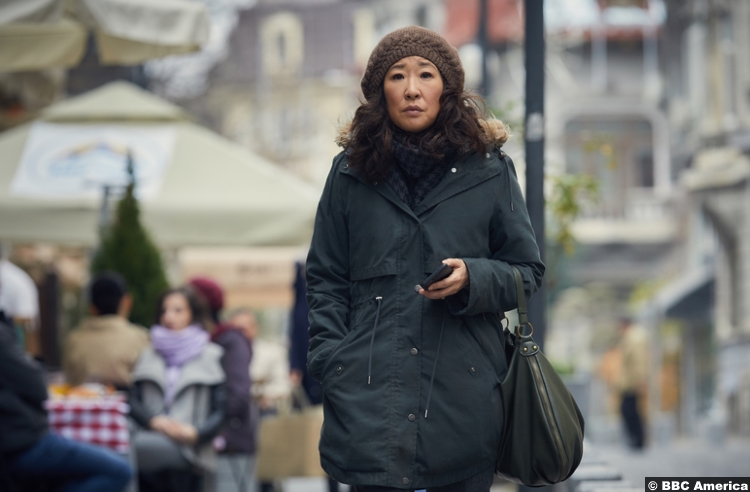 Villanelle may later say that she wants the same things most people want–“Nice life. Cool flat. Fun job. Someone to watch movies with”–but she’s driven by an internal rhythm I’m not sure even she understands. She is so expert at aping emotion that it’s hard to tell what she really feels.

So it’s not surprising if Anna doesn’t understand her own feelings toward Villanelle. I don’t think she ever dreamed that their affair would end in her husband’s murder and it obviously haunts her. And she’s clearly so desperate to escape Villanelle that she’ll turn a gun on herself. But still, she kept the letters.

Unfortunately for Villanelle, the coat is empty. Eve’s taken the stash and left a “Sorry baby” note in its place. So she arranges to meet Eve and exchange Irina for her freedom, basically. Eve has been hanging with Konstantin and unfortunately for him, he’s still on Villanelle’s list. So after she gets him to tell her he loves her more than Irina, she shoots him. Poor Irina, man. I mean, besides the obvious, the kid is seeing way too many people get shot. Like, more than zero is way too many.

Back in London, Elena has found a curious death. A young man in Paris died from a chemical contaminant that matches a suspected Villanelle hit. And there’s an apartment in the young man’s building that’s being paid for by the same account that was paying Frank. So Eve goes there immediately. What else is she going to do? Her marriage is in shambles and she’s been fired by Carolyn for her insubordination.

They have a frank conversation about their fascination with one another and I mean, I get it. I don’t get my jollies off to either of them, but I do want to know what kind of shampoo Villanelle uses. 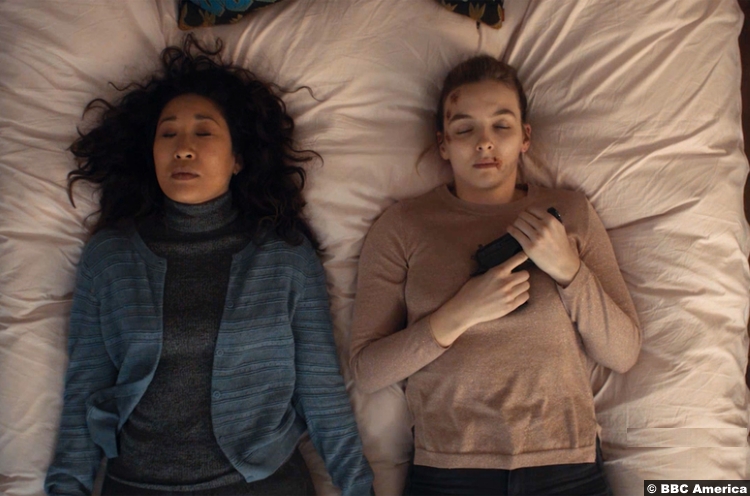 Anyway, it almost seems like a love story as they lay side by side on the bed together. But sorry, baby. Eve tells Villanelle that she’s “never done this before” as a prelude to stabbing her in the stomach. It’s curious. Does she do it for Bill or does she do it just to see if she could? Whatever her reasoning, she wants to take it back right away. But Villanelle’s hurt and betrayed and then just gone.

9/10 – Despite the fact that they left the Carolyn stuff dangling, this was a pretty great episode. The cliffhanger ending wasn’t the momentous shock that I’d hoped for, but it was a surprise. Then again, as there’s a season 2 coming, there really wasn’t another way for this season to end. They couldn’t just run off into the sunset together, after all. So we have a lot to look forward to in season 2. In case you missed it, Villanelle said, “I really liked you.” Liked. As in past tense. She’s a challenge when she’s fond of you–you know what she’s like when you betray her? Ask Nadia. You know, if she weren’t dead.

[Note: The episode title made me laugh because I was like, “Hard same.” Despite coming through winter completely unscathed, I somehow caught a cold less than a month before summer starts. So I apologize for any errors or scattered thinking. I’m a little loopy on cold meds right now. (I’ll be fine, it’s just…see the title.)]