It could have been disastrous for Eve to enlist Kenny in her quest for information on Carolyn, since he is, after all, Carolyn’s son. And when he shows up in Moscow this week, your first response might be alarm. 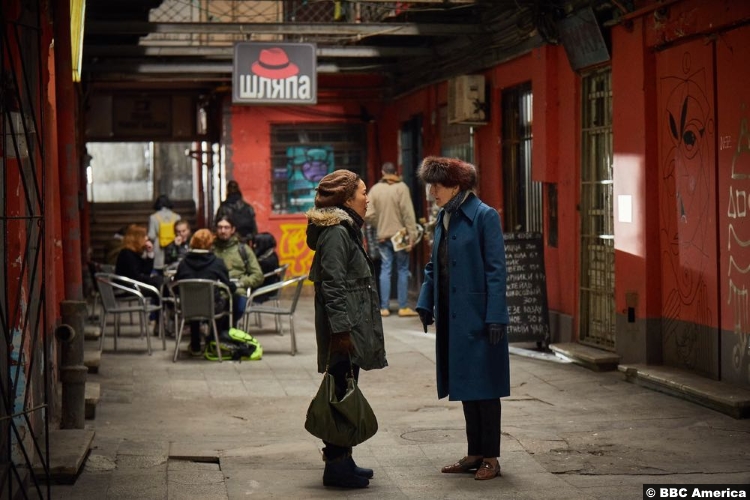 Then Carolyn dismisses them both, telling them to return to the UK. (They do not.) It’s become clear that Eve is getting closer to something that Carolyn doesn’t want her to find. So, of course, that raises the question–why recruit Eve in the first place?

This is a question that won’t be answered this episode, despite the extra details we learn by the end that will have you asking it again. Instead, we get the answer to another question: who is Anna?

If you were hoping for high intrigue, you might be disappointed at this point. It turns out that Anna is an ordinary woman. She’s a language teacher and Villanelle, nee Oksana, was her student–a student, by the way, who became very infatuated with Anna. Anna dismissed it all as harmless until Oksana murdered Anna’s husband and castrated him. Anna has a lovely head of dark curls, by the way. 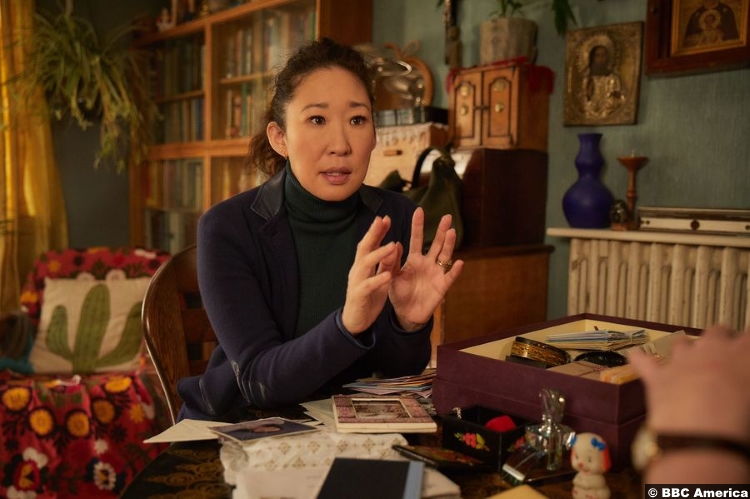 But something about her is off. Why does she have a passport for Villanelle? Why did she keep a stack of letters from her? And speaking of stacks of letters…

Kenny found a stash of dirty letters from Konstantin to his mother, as well as a picture of them together with a group of other folks. When Eve shows the photo to Anna, she IDs Konstantin as the man who visited her after Oksana was taken away and told Anna that Oksana was dead.

That would be a pretty big shocker on its own–for Eve, not us–but hours of watching the prison’s surveillance cameras yield a bigger one. After staring at the computer screen until their eyes go blurry, Eve finally spots Villanelle in the prison. She’s being led to the visitors’ room. And who is she meeting? Carolyn. So again I must ask, what is Carolyn’s game here? Is she one of the Twelve?

We weren’t shown that prison meeting when it happened, although we did get to spend some time with Villanelle there. She was still in solitary confinement at the beginning of the episode and although solitary confinement is awful, it can always get worse. How? Well, one way is by putting another person in your cell. Villanelle returns to hers to find Inga in repose on the concrete bed. She’s not chatty.

One of the guards warns Villanelle mockingly not to fall asleep. After hours of putting it off, she finally appears to be at rest on the floor. But of course, we know enough about Villanelle at this point to know that she’s the innocent flower with the serpent underneath it. (Sorry, Shakespeare.) Unfortunately, Inga, who retrieves a razor blade from her mouth, doesn’t know that.

So when Inga goes on the attack, a not-sleeping Villanelle quickly gains the upper hand. And the upper back, as she perches on Inga’s. Unfortunately for Inga, it’s a perfect angle for Villanelle to sink her teeth into the other woman’s neck. The guards drag Villanelle out of the room while Inga bleeds on the floor.

Villanelle is escorted away from the prison, but the whole thing is just a ruse to bust her out. She’s taken to meet Anton, who says he’s her new handler. He gives her a postcard with her next job. Upon its completion, she’ll get her passport and credit cards back. Anton is a bit of a jerk and a bit dumb to hand Villanelle a gun. Well, he’s dead now.

In perhaps the biggest non-surprise of the episode, the name on the postcard is Konstantin. He returns to his lovely waterfront home to find his family missing and Villanelle in his daughter’s blanket fort. (She says his wife and daughter are in a “cupboard.” Sure.) 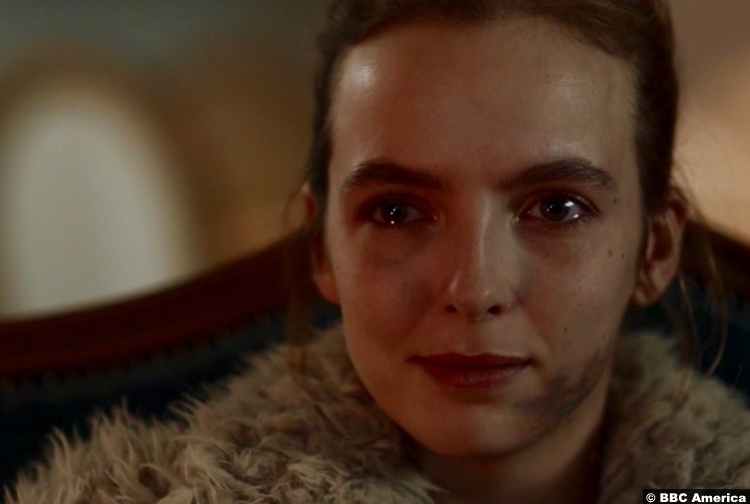 He won’t tell her the answer she wants–the identities of the Twelve or the identities of the “Keepers,” the people he says are the only ones who know. Instead, he tries confession, tears springing to his eyes as he tells Villanelle how much he loves and protects her. As the house marshmallow here, it would bring a tear to my eyes if I hadn’t seen Villanelle pull the same trick repeatedly. But she almost looks moved.

She doesn’t have time to dwell on that, though, because Konstantin chucks his highball glass at her face and then knocks her sprawling with a piece of firewood. He manages to escape via boat, flipping off Villanelle as he speeds away. So now both ladies are alienated from their bosses. That’s not good for anyone. Except us.

9/10 – As we head into the finale next week, I have no idea how it’s all going to turn out and that’s what I want. I am a little nervous, as I’m not sure there’s a satisfying answer for what Carolyn is up to. Then again, I remember the incredible (and incredibly devastating) twist Phoebe Waller-Bridge delivered in Fleabag and I have faith. I also have a lot of worry for Niko and his…bits. Eve better put him in a cupboard before Villanelle gets to him.