Killing Eve S01E05 Review: I Have a Thing About Bathrooms – Guess who comes over for dinner!

I’ve been thinking a lot about Joseph Beuys’s performance art piece I Like America and America Likes Me this week. Part of it sounds like pretentious art nonsense, the kind that makes me luxuriate in eye-rolling, but there’s a part of it that’s compelling to me. That part is the idea that Beuys didn’t necessarily tame the American symbol, the coyote, but instead wore down its tolerance through exposure. (It occurs to me that I am America.)

Anyway, obviously I’ve been thinking about that since some have suggested that my until-now favorite rapper has been up to something similar. [And on a side note, considering he just released the silliest verse on one of his songs since Jay-Z apparently thought the memo for “Monster” was “Just…name a buncha monsters,” boy, I sure hope so.]

But the other reason I was thinking about it was because of Villanelle. I’m not sure that she could grow tolerant enough to allow hugging, but repeated exposure to Eve could weaken her defenses. She does, after all, spare Eve repeatedly this week. In fact, we begin the episode with Eve getting out of the car to approach her. 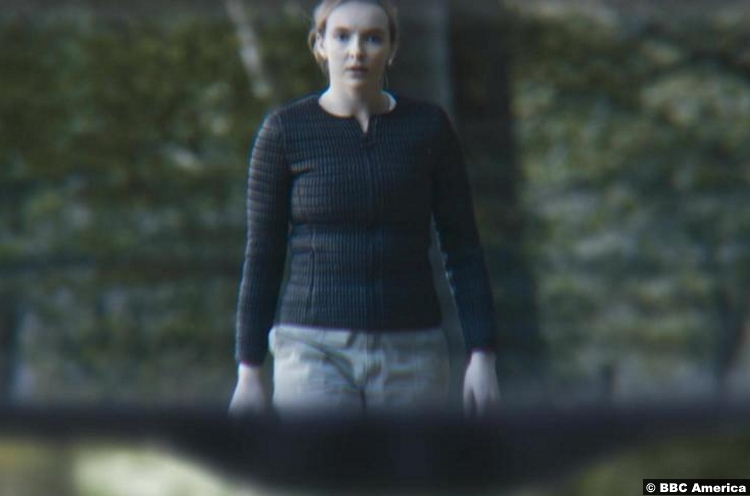 After Villanelle disappears into the brush, Eve and Elena take Frank to a safe house set up by Carolyn. He explains through interrogation that he was turned not through threats, but through compassion. This organization, The Twelve (12?), offered to pay for his wife’s medical care and then later, the tuition. It kind of reminds me of Robert Hanssen. He put innumerable people at risk over 22 years in exchange for just under a million and a half dollars. Hmm. Anyway, Frank doesn’t really seem to know much about The Twelve’s intended effect other than chaos.

After returning home (and shattering a bus shelter wall just for kicks), Eve goes through the designer gear Villanelle gave her. She tries on a dress and kicks back, just before hearing a noise. “You need to be more careful, Eve,” I say, from my house where literally all my doors are open. She locks her door and calls out for her husband, who isn’t there, because of course, it’s Villanelle, just standing in the hallway.

What follows is a chase sequence pitched for comedy in which Villanelle breaks down the bathroom door to find a screaming Eve brandishing a toilet brush. She finally knocks Eve out of her hysteria by straddling her in the bathtub and turning on the water in her face. What’s with all the screaming, anyway? The assassin just wants to have dinner. 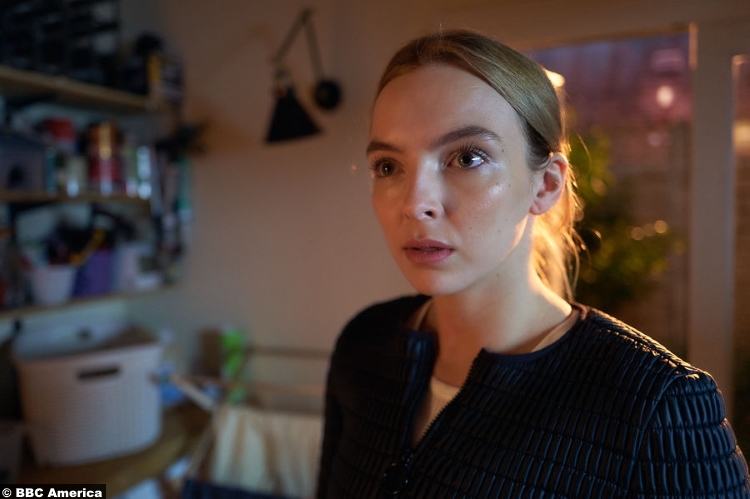 The dinner scene is one of the show’s best. Eve is terrified, gingerly stepping around Villanelle as if she really were a coyote. Meanwhile, Villanelle is amiable to anything. Microwaved shepherd’s pie? Sure!

During dinner, she immediately switches on the waterworks and claims she wants out of her life and needs help. Eve, however, has read Oksana’s file and knows she has a long history–as in, from childhood–of attacking people, so she calls BS on this. She just wants to know why Bill had to die. Her new BFF says he was slowing Eve down.

Villanelle takes Eve’s phone*, which means she has the interview with Frank and more importantly, Frank’s location. Eve shows up at Carolyn’s house to tell her all this while Carolyn is in the middle of a dinner party. Said party includes Kenny, who is actually Carolyn’s son. But we don’t have time for you to react to that.

Instead, we have to send over whatever the British equivalent of SWAT is. I assume it’s also called SWAT, but they pronounce it like that other word they love that ends in w-a-t. Anyway, they’re all too late. One of the safe house managers is still barely alive, but he’s the only one. 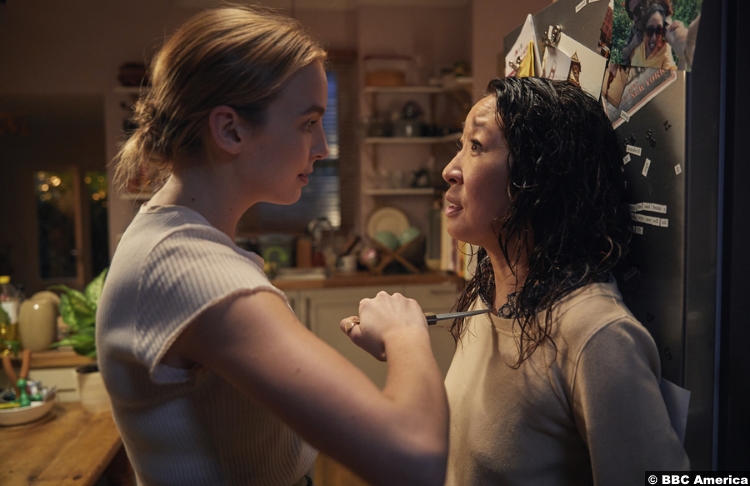 Frank had just finished brushing his teeth when Villanelle popped up behind him. She’s left his body on display, wearing the dress she gave Eve, and she’s castrated him, as a nod to Eve, who asked her earlier why she’d done that in the past. Whether she did it pre- or post-mortem is a mystery.

What’s not a mystery is what happened to Nadia. Only one body had been found at the rural spot where Frank encountered them, because it turns out that Nadia is still living, even after being run over twice. As Villanelle’s story is that Diego killed her, Konstantin advises Villanelle that she’d better get to Nadia before the latter woman starts telling her side of the story.

The tough part is that to speak to Nadia, Villanelle will have to go to Russia. Instead of showing the fear she’s supposed to (about the whole thing in general and also seeing the mysterious Anna again), she opts for bravado, instead. Using the information she’s gleaned from the tape of Frank, she asks Konstantin what number he is. Somehow she knows he’s not 12. And for the first time, they both look a little scared.

9/10 – Despite all the murders, this is probably the funniest episode of Killing Eve so far. (I’m aware of how weird a statement that is.) That could be a misstep, as it’s so easy to get the tone wrong. Somehow, though, the show pulls it off, thanks to the grounded performances of Oh and Comer in particular. It helps, of course, that the unpredictable Villanelle is insanely watchable. But not insane–don’t say she’s a psychopath. It hurts her feelings.

*Security officer Eve’s pin for her phone is 1-2-3-4. Eve, c’mon. Then again, it is my favorite BBC password scene since this one.