Killing Eve S01E02 Review: I’ll Deal with Him Later – The game gets underway

As I predicted after the last episode, Eve does make her breakfast appointment with Carolyn. It seems that the senior agent is given a small fund and a little-known office to pursue cases that strike her fancy. Eve, seeing the office for the first time, with its wall of clues [YES], says, “It’s like I’ve walked into the inside of my brain.”

Eve is going to be on point during this Lady Assassin investigation and she’s given leeway to hire two more people, in addition to computer tech Kenny (Sean Delaney). She hires her old boss Bill and former coworker Elena (Kirby Howell-Baptiste), who’s all too happy to quit her old job when she hears she’ll be working for the Carolyn Martens. 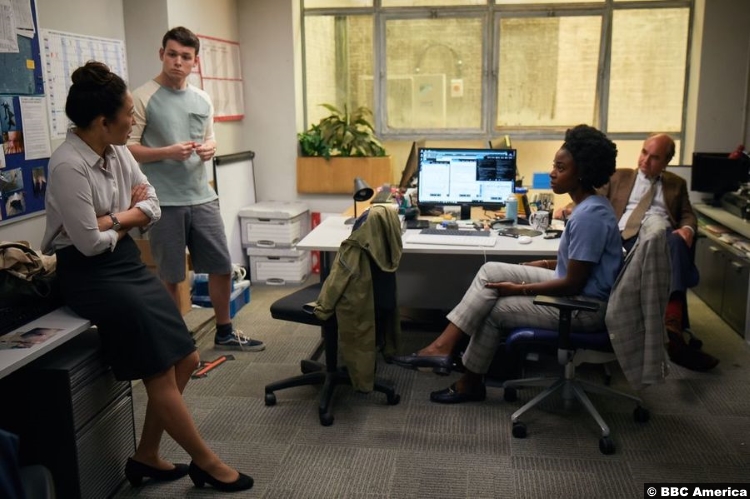 So despite the brief setback last time, Eve’s career is now going well. One person who can’t say the same thing is Villanelle. Konstantin is concerned after the Kasia incident. If you’ll remember, it was supposed to look like a suicide. Instead, for it to be a suicide, Kasia would have had to have murdered four nurses and then slit her own throat. It’s not out of the realm of possibility, but it’s just not that believable.

So Konstantin orders her to be assessed. Basically, she has to speak to a shrink before she can go back out into the field. It’s wild to think of the scale of this Murder, Inc. organization that they have this sort of infrastructure in place. Anyway, Konstantin takes back the postcard for the next job. (Postcards are how she gets her assignments.)

At the assessment, which Konstantin attends, the doctor thanks Villanelle for making an effort. Then the camera cuts to her, clad in an enormous pink chiffon frock, which is a fantastic visual joke. The doctor shows her some photos and asks for her opinion. Shown a hanged woman, she thinks, “Nice legs.” Shown a hanged dog, she fakes an emotional response and then laughs. Meanwhile, I wanna know if the photo is real and who did it and where they are because I just wanna talk. They also ask her about an Anna and her studied nonchalance reminds me, in contrast, of the way she stared at Eve last time. Anna also has dark hair, apparently. 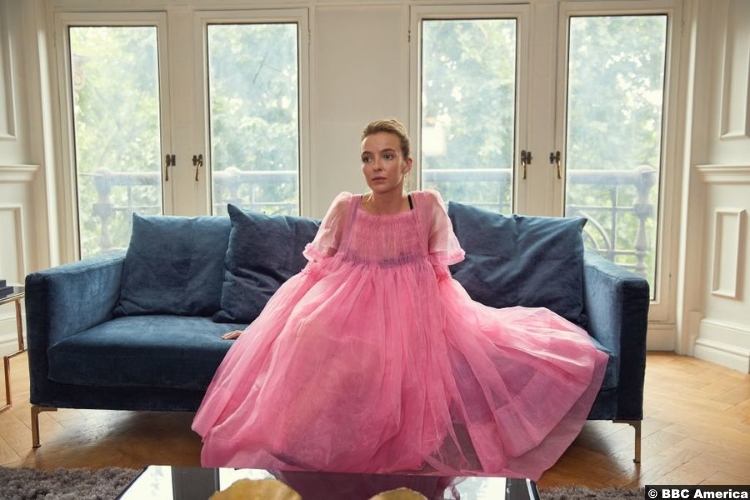 Anyway, she’s cleared, but Konstantin still wants her to hold off on the next job. He wants her to take a vacation or something, do something normal. She agrees while slipping the job postcard out of his pocket. Then she does both. She does something normal, in that she dates her new neighbor Sebastian and well, he’s doomed. But she also intends to do the job.

Meanwhile, back in Office 9 3/4, they’ve got a staggering task ahead of them. Eve asks Kenny to look up any woman 16-45 who’s been associated with psychopathy. Where? THE WORLD. While this is a TV show, this isn’t one of those shows where the computer nerd is like, “I’ll create a GUI interface using Visual Basic–see if I can track an IP address.” Kenny, in fact, is like, “That’ll take months,” while Eve stares at him like, “And?”

She does remember the encounter with the “nurse” in the hospital restroom and decides to look her up, wondering if she might have seen something. Her curiosity is only stoked when she starts combing through hospital employees and can’t find the woman. Bill presents another interesting idea. While Eve is focused only on the woman, Bill, like me, is curious about the organization behind her. Someone has to be planning all this, after all.

While they’re just beginning, Villanelle is ending. Someone else’s life, that is. Her target, the job she’s not supposed to be doing, is apparently the head of a cosmetics conglomerate. Dressed as a cater waiter, Villanelle sneaks into an event where she’s able to get into a women’s restroom alone with the woman. (Again with the restrooms.) She presents herself as an aspiring perfumer and uses a combination of guile and flattery (she named the perfume after this woman) to get her to try it. 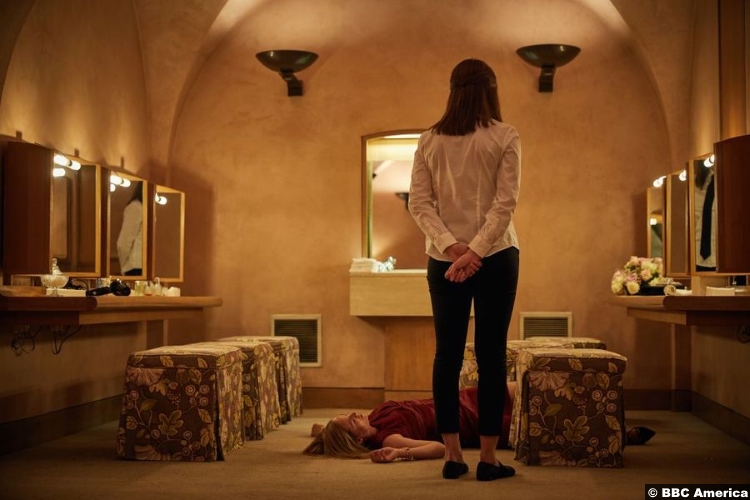 Aaaand it’s poison. Sorry, Carla. Back at home, Villanelle finds an angry Konstantin waiting for her. Unfortunately, Sebastian interrupts their grappling, so he gets a whiff, too. Villanelle is unbothered about Konstantin. After all, as she tells him, if she killed him, they’d just send another one.

In fact, the only thing that bothers her is when he drops the bombshell that a task force has been formed to find her. Searching for Eve Polastri in Gaggle Image Search (or whatever they’re calling it on this show), she realizes they’ve met before. And now she’s intrigued.

8/10 – While I didn’t like this one as much as the premiere, that’s understandable. This was a table-setting episode, intended to put pieces on the board before the game really begins. And that’s fine. It’s not that exciting, but it’s fine. I do like the inventive ways in which Villanelle dispatches people. Like Eve, I’m a fan. Guns are whatever, but the hair pin from last time and the perfume this week are Batman villain weapons and I love that. Villanelle may not have a soul, but she’s never boring.