After finding out last week that Villanelle gave Eve’s name as her cover, it occurs to Team Eve: how did she know that? The most obvious explanation is that there’s a mole.

In fact, Jin said as much when he gave Eve that flash drive, but, you know, that kind of got pushed to the wayside in the event of Bill’s death. And his death still lingers large over everything else that happens.

We begin with his funeral, where Frank gives a eulogy. The combination of that, Bill’s infant daughter howling, and just all of it sends Eve out of the chapel. At home, Niko is also upset, because Eve swore that this new job came with no risks. He knows that the cover story–61-year-old Bill was mugged in a dance club–doesn’t seem right. But Eve won’t tell him anything. In better news, though, her suitcase has been returned from Berlin.

The fact that it’s full of completely new (and expensive) clothes is not a surprise. Our gal likes to go all out, as we see in the fact that she’s not only decorated her apartment for Konstantin’s birthday, but she’s also donned a fake beard to celebrate. It’s not his birthday, by the way.

He easily guesses that she’s trying to butter him up, because she knows that he’s angry. He’s found out about her using Eve’s name. Her punishment, then, is that her next job will not be alone. She has to have partners, whom she will meet in England. But appeasement isn’t her only reason–through the gifts she gives him, she wants him to know that she knows he has a daughter.

Meanwhile, back in England, Eve is smartly not smelling the La Villanelle perfume that’s been enclosed in her luggage (with a note that reads…well, see the title of the episode or the gif). When she brings in the whole suitcase for analysis and decides that “Villanelle” is what she’ll call her nemesis, Kenny gives her an update on the mole–he’s traced financial data on the flash drive to a local school, as in, whoever received the money used it to pay tuition. Whose children attend that school? Frank’s.

So Eve and Elena head to Bletcham to surveil Frank. At the same time, Villanelle has found out her new partners are her ex, Nadia, and Nadia’s new boyfriend, Diego. And their target is Frank. 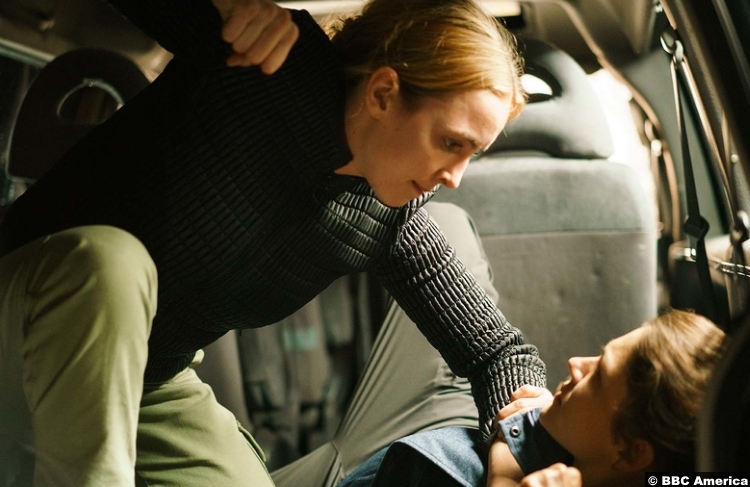 Villanelle and Nadia are invited into Frank’s home by his “mother,” who says that Frank has stepped out to the shops. She calls him and Kenny is able to let us know that the call is literally coming from inside the house–the landline mom uses calls a cell inside the same residence.

Villanelle has already noticed that Frank’s vehicle is still there, so it’s no surprise when he comes rocketing out of the drive. The trio of assassins are in hot pursuit, but Frank manages to evade them long enough to ditch his vehicle and hide in the brush. Eve gets him on the line and directs him to her.

Villanelle, having grown disgusted by Nadia and Diego’s relationship, persuades her ex to end it. She does, with a gun. After promising that she’ll regain Nadia’s trust, Villanelle then runs over her ex. Twice.

By that point, she’s spotted Frank running away, so she pursues him on foot. He manages to make it to Eve and Elena, where they sit in the car as Eve, the driver, watches Villanelle come over the ridge. And as they make eye contact and the screen fades to black, a shot rings out.

8/10 – While Eve’s marital issues are clearly hovering in the background, she’s also got some bigger problems to deal with. Like that gun pointed at her face. We’ll have to wait until next week to see the outcome of that, but we know that despite the title of the show, Villanelle (or should we call her Oksana?) will not kill Eve. Yet. And while all that is going on, something else is going on with Frank. We know he’s involved with Villanelle’s organization in some way, but what was up with his “mom”?

And in more pressing news, the new cashier at my local corner store is a dead ringer for Jodie Comer. I’m keepin’ an eye on her.

Note: In the past, I’ve referred to Eve as being a former agent of MI6. I’m not sure if I read something to that extent, but it now seems that she was actually working for MI5. I could only vaguely explain to you the difference. And now I know how my British friends must have felt when I had to explain what US Marshals are when Justified was on. (The US Marshals are a federal law enforcement agency. While they can be dispatched for all kinds of stuff–here they are, escorting Ruby Bridges as she integrated her school–they primarily work as the federal judicial system’s law enforcement. Love, your American friend.)