Based on the Villanelle novels by Luke Jennings, BBC America’s new series Killing Eve is about an MI6 employee who becomes obsessed with a female assassin. 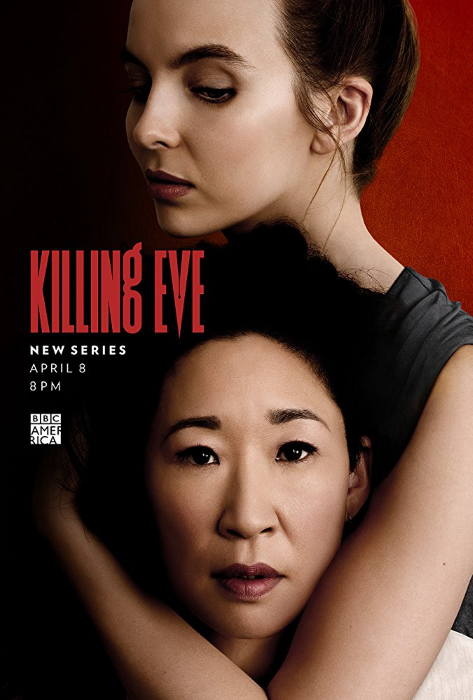 Played by Sandra Oh, Eve Polastri isn’t a spy or even a detective. She’s an assistant, a security officer, who is quickly intrigued when she figures out ahead of everyone else that the murderer they’re seeking is probably a woman.

The murder victim was a Russian politician, sex trafficker, and all-around awful human being who was dispatched with a teensy nick to his femoral artery. Eve realizes that a guy like that has little regard for women–he sells them, after all–so he wouldn’t be as alert if one got very close.

There’s a small problem, though. According to MI6 sources, the person caught on CCTV was a man. This doesn’t jive with what the dead man’s girlfriend, Kasia (Edyta Budnik), is saying, though. After seeing him murdered in Vienna, Kasia fled to the UK. Eve tries to talk to her, although she has no business doing so. She manages to record Kasia’s gibberish, her “heroin Polish,” as Eve calls it and plays it for her Polish husband, Niko (Owen McDonnell), and a (Polish) teenage friend of theirs, Dom (Billy Matthews). 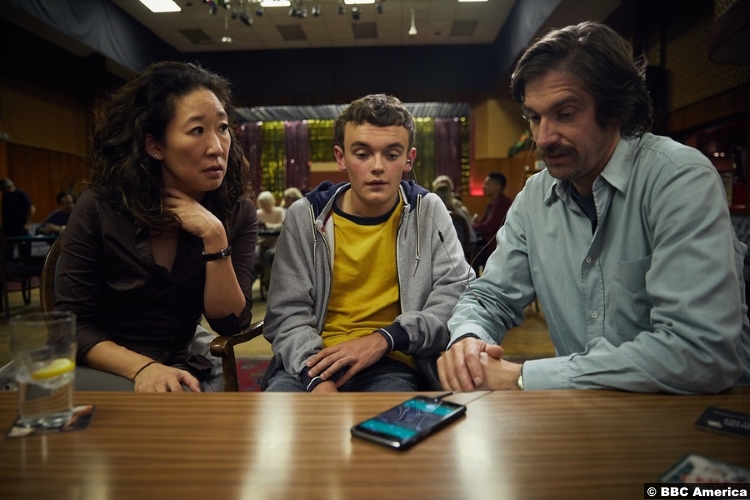 They explain Kasia’s slang–she wasn’t high af and saying she saw a “plank.” Well, she is high af, but she was describing the killer as flat-chested, like a plank. Specifically, she describes her as a flat-chested psycho.

While Eve begins her (completely unauthorized) investigation, said psycho, Villanelle (Jodie Comer) is already off on another killing assignment. Her target this time is a man in Tuscany. He seems sweet enough, celebrating his anniversary with his family and friends, but the extensive security is an indication he’s been up to no good. (The headline about his murder that names him only as “Mafia boss” is also a clue.) 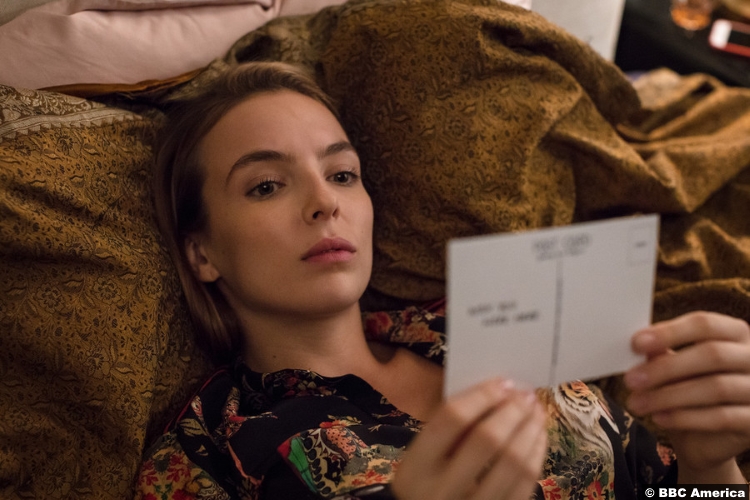 Villanelle has a handler, Konstantin (Kim Bodnia), who gives her the assignments. Just as soon as she’s back in Paris, her home base, he has another one–take out the Polish girlfriend and make it look like a suicide. At the same time, Eve’s on her way to the hospital, Dom in tow, to try interviewing a hopefully more sober Kasia.

Some descriptions of the show have described Eve as bored, as in, that’s why she gets so drawn into the cat-and-mouse game with Villanelle. But she’s not bored so much as she’s comfortable. She’s hit a plateau at work and in life. Then along comes Villanelle.

They have their first encounter in the most glamorous location, a hospital restroom. Villanelle is dressed as a nurse and stares at Eve with what seems like her own fascination. While Eve is in a stall, her boss Bill (David Haig) calls and says the CCTV story was phony. 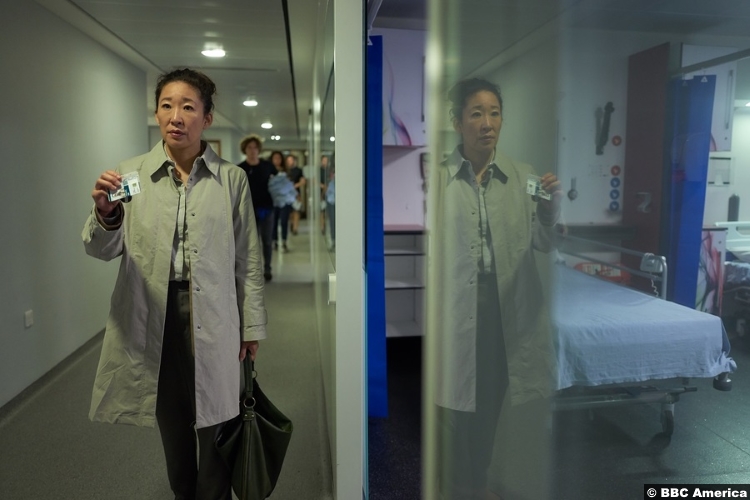 When she returns to the ward, it’s quiet except for a ringing phone. It would be cliche to say that it’s eerily quiet, but sometimes cliches are right because she returns to a multiple murder scene. Kasia, the girlfriend, is alive, but barely. Luckily, Dom followed his instincts to get his “cousin” Kasia some chocolate and was away from the room when the killing commenced.

Eve and Bill are both fired by their boss, Frank (Darren Boyd), but something about the way Eve has been putting everything together piques the interest of Carolyn Martens (Fiona Shaw), another top-level MI6 employee. In fact, she ends up showing up at Eve’s house, where she uses a trip to the grocery as a pretense to talk to her about Villanelle. It seems that some people at MI6 know all about her already, because she’s been killing for two years that they know of.

Carolyn invites Eve to meet her for breakfast later in the week so that they can discuss this further. Eve doesn’t give an answer either way, but we know she’s going to show up.

Meanwhile, Villanelle is in Bulgaria. Another day, another dollar, another death.

8/10 – While I’d put Killing Eve on my “I’ll watch it when I get around to it” list, it quickly moved up to must-see when I found out the show had been created for television by Phoebe Waller-Bridge. She’s also the creator of the pretty great series Crashing and the incredible Fleabag. So while the bones of Killing Eve are admittedly quite familiar–detective and killer simultaneously obsessed with each other–there’s an extra spark of style that makes it not just another procedural. Both of these women seem to be at a crossroads and meeting has now given them a direction to follow. And I, for one, am excited to see how they crash into each other.