As last week’s episode ended with the realization for both Villanelle and Eve that they’ve met before, we begin this week with Eve describing her newly minted nemesis. It’s a poetic description that begins with a survey of Villanelle from the shoulders up and ends with an analysis of her being (“…totally focused yet almost entirely inaccessible”). “Uhhh, so is that like a square face or an oval face?” the police sketch artist asks.

This is likely a hint of the contrast between the way the traditional law enforcement and Eve are approaching this case. The former sees it in well, the traditional way, while Eve, who has already marked herself as a “fan” of Villanelle, sees in her a worthy adversary.

While Eve is rhapsodizing about an assassin, a Chinese colonel is visiting a–* five-second long pause*–clinic in Berlin. The first hint that this may not be entirely medical is that the only other “patients” we see are also men. And then the front desk receptionist reads through a long list of disclaimers. I just went for a physical last month and I can tell y’all, they didn’t ask me to sign off on possible “accidental mutilation” during my visit. 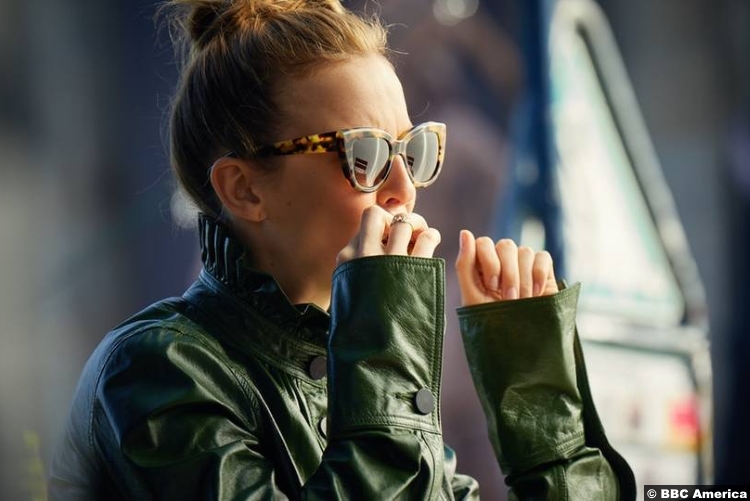 And oh, yeah–they also confirm his safe word. It’s “Frühstück” (breakfast, lol). The colonel is a little disappointed because it’s his birthday and his regular gal, Hortense, had promised something special. She’s been called away, though, and there’s a “cover nurse.” I shouldn’t have to tell y’all that it’s Villanelle.

After a little light nethers torture while ignoring his safe word, she gasses him to death (with carbon monoxide). Then she practically skips away over Monbijoubrücke. No one notices her.

Back in jolly ol’, Eve is worrying about nothing more complicated than whether it’s safe to eat the eggs her chicken is laying. (In the spirit of spying, I’ll call the little clucker Abrahen Woodhull.) That all changes once she gets to work.

There, she’s going on about Carla’s death from last week when she finds out that Villanelle has taken another victim–the colonel, Zhang Wu. His job reportedly involved military hacking, so there’s some tantalizing possibilities to explore re: who hired Villanelle.

That, however, is not what’s got everyone acting squirrelly. It’s that when Villanelle checked in as the temp nurse, she told the receptionist that her name was Eve Polastri. The game, she is afoot.

Eve is shaken, but she’s more upset at the possibility of being axed from the team. Carolyn tells her, though, that she can’t be cut from a team that doesn’t technically exist. So that’s cool.

Eve decides to go to Berlin and take Bill with her. He’s hesitant, but she assures him that there’s no way that Villanelle is still in the city.

She is still in the city. In fact, she’s busy playing sex games with a tourist whose accent sounds like she’s from the American midwest. Villanelle tells her that she’s going to call her Eve, then announces that she’s going to hide and that “Eve” should find her. I feel like there’s some subtle symbolism here, but I can’t quite put my lady hands on it. 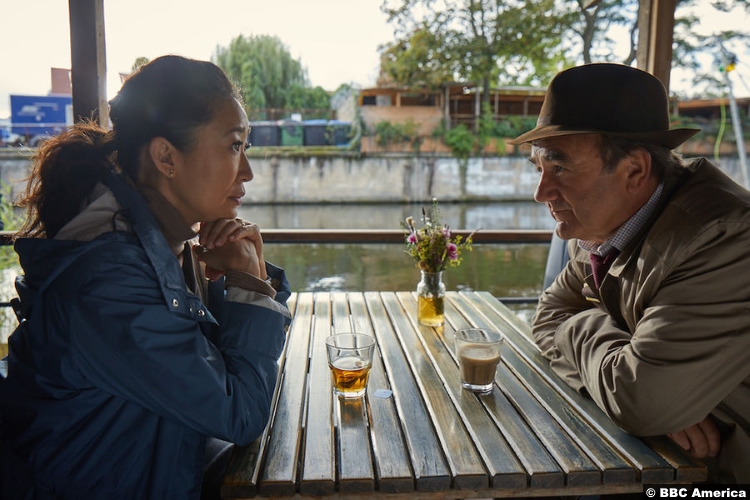 Villanelle is watching when Eve and Bill arrive at the Polizeistation. The look on her face is pure delight. This really is a game for her. So much so, that she steals Eve’s suitcase. While she’s rummaging through it, the toilet in her hotel room flushes and Konstantin emerges. This “Eve Polasi”–“Polastri,” she corrects–is in Berlin. He doesn’t know why she suspects Villanelle of the crime, but he wants V to keep an eye on the spy. Spy vs. spy!

Meanwhile, Eve and Bill meet with Jin Yeong, a Chinese attache who ordered a second autopsy of Zhang. It turns out that the colonel died of a heart attack, so there’s no murder here, no PR nightmare, and nothing to see, just move along!

He does ask to see Eve for dinner, which Bill and Eve debate later on the street. Villanelle takes the opportunity to bump into Bill and when he calls out “Entschuldigung” (“Excuse me”), she turns around and regards him. Is this when he’s marked? 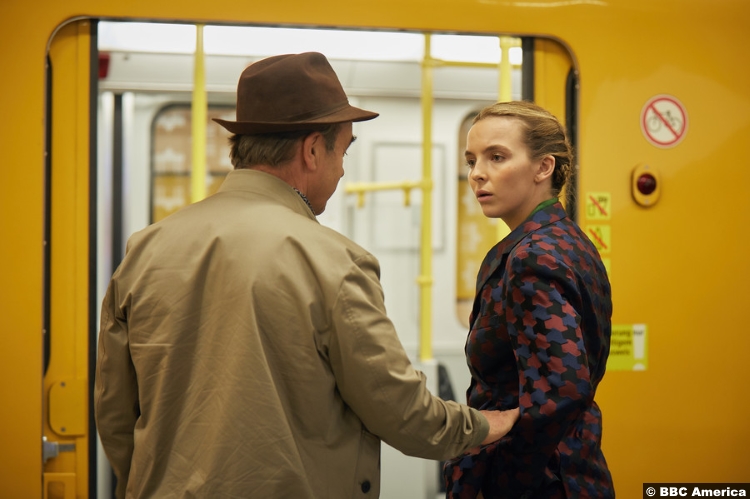 Villanelle has found a way to listen in on Eve’s Skype calls, so that’s not good. Neither is the fact that Bill spots her in the train station when he’s seeing Eve off for her date with Jin. Before she can grab the next car down, Bill grabs her. He asks her about her scarf, which is Eve’s. Then he lets her leave, but he follows her.

So while Jin is making Eve mad uncomfortable, Bill is stalking Villanelle. He’s doing a sloppy job of it, too. She definitely knows that he’s behind her, because he’s like, 10 feet behind. He loses her for a bit, though, when she ducks into a dance club.

By then, Eve, who’s been gifted a flash drive from Jin, is listening to her voicemails from Bill. It’s too late, though. Villanelle stabs Bill repeatedly and Eve arrives just in time to watch him die. The game just became real.

7/10 – When Bill was playfully singing to his daughter, “Daddy’s going to die,” and giving a monologue to Eve about his life, that sealed his fate more than bumping into Villanelle. It’s understandable why the show went in that direction–it makes the stakes real for Eve–but that doesn’t mean it’s not still a cliche. It’s a stumble, but it’s a minor one, so the show can get past it.