American Gods S02E01: House on the Rock – Opaque on arrival, inevitable in retrospect, I hope

Debuting just shy of two years after its first episode, no one could have foreseen the trouble that American Gods had to go through for its second season to happen at all. The first season, which I mostly adored, was a fantastical frenzy of beautiful visuals, interesting character dynamics, more arresting visuals, a lot of black comedy, and a healthy dose of the surreal that eased us into a world of forgotten gods trying to ply their trade in an America that had mostly forgotten them. While the first season had its share of problems, one of them being pacing, and another being how damn long it took the lead, Shadow Moon, to believe all of these incredible things happening to him: including his wife Laura coming back from the dead (technically), and all of the crazy crap that Mr. Wednesday got him into, it was a challenging and deeply rewarding show from creators Bryan Fuller and Michael Green.

Not surprisingly, while the series has a set core of fans, it didn’t do as well as Starz were hoping meaning that both Fuller and Green’s scripts for season two were deemed too expensive and, depending on who you believe, they either left the show or were fired. This was a surprising turn of events for anyone not following Bryan Fuller’s career closely which, as a huge fan of his previous series, Hannibal, I did. Since the premature end of Hannibal, Fuller has been attached to many television projects, with season one of American Gods counting as the longest job he’s had in some time. Since then he has left Star Trek Discovery, which is currently on its third showrunner in one and a bit seasons, he’s also left the Steven Spielberg produced Amazing Stories Anthology series and was working on Hulu’s adaptation of Anne Rice’s Vampire Chronicles (a job that he was basically perfect for) before he left that as well.

Replacing Fuller and Green was former Hannibal and Star Trek Discovery writer Jesse Alexander, who shares a writing credit with Neil Gaiman for this premiere episode before he was pushed aside as well. At this point it’s hard to know who exactly is in control of American Gods at the moment but, from what some of the cast have been saying in recent interviews, apparently, season two will be more plot-driven, getting back to the book as it has been described. All of this sounds like Gaiman is in control, which could go either way considering that before his adaptation of his and the late Terry Pratchett’s comic masterpiece, Good Omens, it has been 23 years since Gaiman was the showrunner of a TV show.

Fuller and Green’s departure has also had an impact on the cast as both Gillian Anderson: who so expertly played the new god Media in season one, left with Fuller, and the same goes for the wonderful Kristen Chenowith’s Easter who left for the same reason. Media, by the very nature of the character, can be replaced, but the absence of Easter is a blow thanks to how important she was in the finale of season one, and event that is merely brushed off in House on the Rock.

So, after two years how does American Gods shape up in season two? The answer is complicated. House on the Rock takes just under an hour to recreate one of the most iconic scenes in Gaiman’s novel, as Mr. Wednesday attempts a call to arms for support from the old gods in the upcoming war. Mr. World, played by the little-seen Crispin Glover, looks like he is going to play a bigger role in season two which certainly gives the plot a little more focus. Though I’m a little disappointed to say that House on the Rock feels a tad empty, a little like the feeling you get after you’ve bought a hot dog and a t-shirt from a roadside display: a nagging feeling that you may have wasted your money. In a sense, American Gods faces a similar problem to the second seasons of Legion and Westworld. The first seasons of both those shows spent a good portion of their time teaching you how to watch them but then had to figure out how to keep things fresh in order for the story to continue. Both of those second seasons fall a little short of the first, and I have this niggling feeling that American Gods may go the same way. 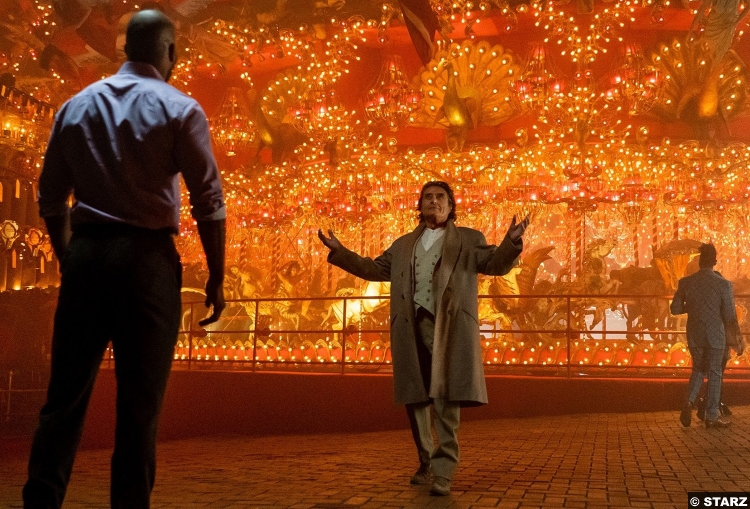 As much fun as House on the Rock was, and it certainly was that as the motley crew of weird characters are a blast to be around, the episode spent far too much time trying to pull a lot of sleight of hand on both us and Shadow; who is still asking if this shit is real or not. Get with the program dude! This episode actually reminded me of another second season of a cerebral hit show: Mr. Robot. Most of Mr. Robot’s second season felt as if creator Sam Esmail was trying to trick us to buy time for what ended up to be a damp squib of an ending. American Gods is in the same kind of precarious position.

6/10 – Season one, under the tenure of extremely talented writers who are going to be missed, opened up this glorious world to us. Season two needs to start giving us some answers. It’s definitely opaque on arrival. The question is will it feel inevitable in retrospect or just bloody annoying.