American Gods S01E07: A Prayer for Mad Sweeny – Some killer, some filler and all off-kilter

In the golden age of television penultimate episodes have become the stage for a season’s most shocking twists and season long events coming to a head. That’s why it feels strange to watch a show that refuses to take advantage of this opportunity. That is because American Gods doesn’t follow the same rules as most television shows. It’s not interested in anything traditional, which is highlighted by its mix of serialised plots, episodic plots, and narrative detours more at home in anthology shows. Like America is sold as, American Gods can be all kinds of things at once. Which is why its penultimate first season episode takes a complete break from the main narrative to fill in some of the blanks in Mad Sweeny’s story.

The fact that Bryan Fuller and Michael Green are wanting more than one season of television from a 600+ page book means that they must expand certain characters and storylines in order to fill the time. If we only seen the story from Shadow’s point of view the show would probably much nearer to its conclusion, so it makes sense to expand as much as possible. Sometimes this leads to filler: like last week’s meeting with Vulcan, and there are points in A Prayer for Mad Sweeny that can be categorised as such. What’s crucially different here is that the episode focuses on the show’s two best supporting characters. If the rest of the show was just Mad Sweeny and Laura’s foul-mouthed road trip I would watch it for seven damn seasons. This is one of those rare instances in which filler can be a good thing.

Before we get to the interconnected story of Mad Sweeny’s past and present, let’s talk about the main plot-heavy moment of the episode. It turns out that Mad Sweeny was responsible for the crash that killed Laura and Robbie, acting on the orders of Mr Wednesday. Eagle-eyed, or raven-eyed, viewers will have been suspicious of Wednesday’s role in Laura’s death as his ravens were seen to be present in “Git Gone”, but now it has been confirmed. Laura was the last obstacle stopping Shadow from accepting Wednesday’s offer, and he used Mad Sweeny to take her out. This also suggests that Wednesday’s plan was much more detailed than first thought: since he hadn’t even met Shadow at the time of Laura’s death. It’s unclear whether this info will come into play in the finale when all the gods will be in one place. 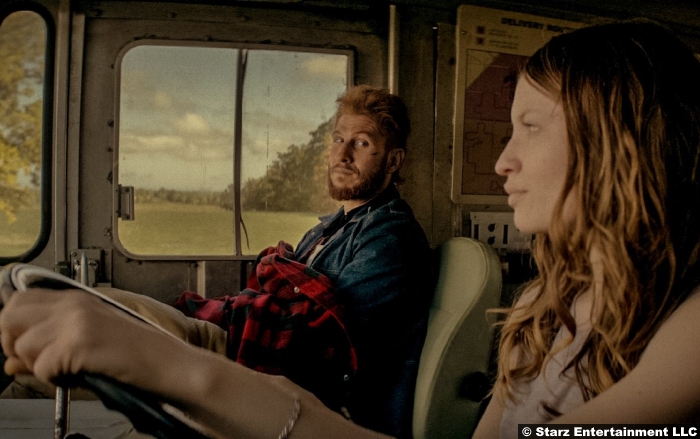 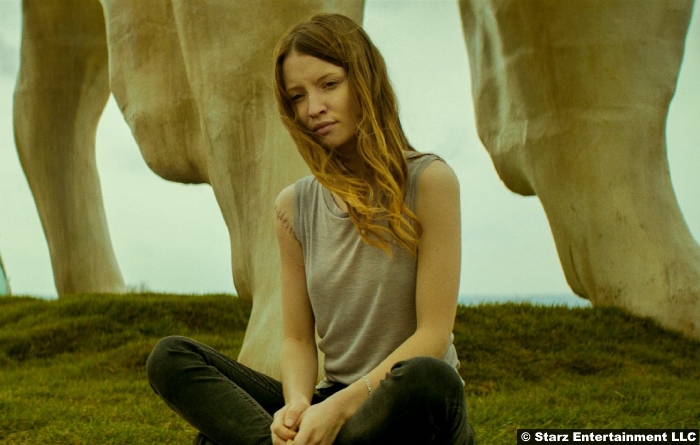 The whole episode feels like a detour from the main story, and as I’ve said before, this can play to the show’s strengths. For as good as the Shadow and Wednesday plots is (especially when Gillian Anderson appears), the show has been much richer when it has focused on Laura and other gods. The show’s expanded universe has deepened the narrative detours that gave the novel a larger scale and done one better. This is apparent in Salim’s continued presence in the show, and Mr Ibis need to tell the stories of the gods coming to America. Yet what A Prayer for Mad Sweeny truly succeeds at, with the help of tremendous performances from Emily Browning and Pablo Schreiber, is the connection between god and worshipper through the tale of Essie MacGowan.

Introduced through my favourite framing device: a story from Mr Ibis, Essie is the Irish woman responsible for bringing Mad Sweeny to America. Played by Browning, in a neat touch of symmetry that the episode is full of, Essie was sentenced to transportation after being labelled a thief after her lover betrayed her. Essie is a fascinating character, which makes sense since she’s played by Browning, whose belief in fairies and leprechauns inform the trials and achievements of her life. Even as she becomes the thief that she was accused of being she always paid tribute to Mad Sweeny. Essie’s similarities to Laura are played up perfectly within the episode. Both characters yearn for a greater freedom from their humble lives and both achieve it at a heavy cost. Even with a wonky Irish accent Browning nails both characters, and her differing chemistry with Schreiber is one of the episodes greatest pleasures. 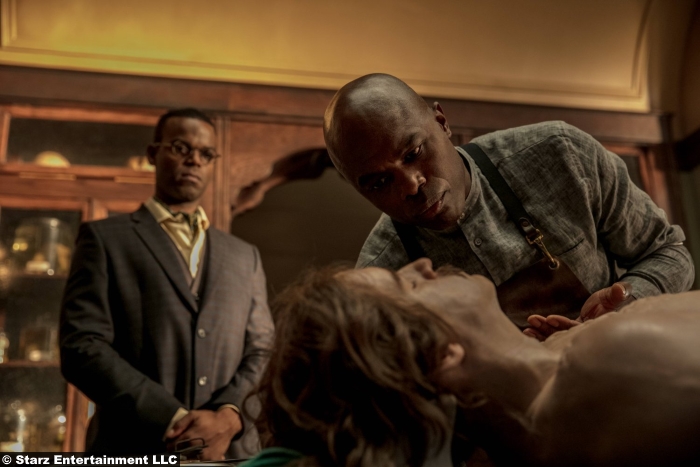 Laura, Mad Sweeny, Salim, and Essie are not major presences in the novel, but American Gods the show has brought them to life, and expanded their roles, and elevating the material in doing so. Schreiber is absolutely perfect as Mad Sweeny. Like many, I first saw the actor in season two of The Wire, and he didn’t impress me all that much. But with broader roles like Mad Sweeny, Schreiber is able to find layers to this comic relief character that lead to moments that are intensely moving. Both of his conversations with a young and old Essie bring out a warmer, more tender side to his character. Contrast this past version with the present and the change is clear: Mad Sweeny is a forgotten god, brought to America by a worshipper that he grew to love, and now nothing but a cronie for Wednesday. All of which makes his decision to resurrect Laura make perfect sense. Last week I said his main motivation was getting his fucking coin back, but with the obvious connection between Laura and Essie, and his guilt over his actions for Wednesday make for a compellingly complex relationship between the show’s two beat characters.

9/10 – This is how you do a filler episode, make it tangential to the main plot while also further filling in the show’s larger story. American Gods keeps proving that it can do whatever it wants.