American Gods S01E06: A Murder of Gods – In Which the God of the Week is the least interesting part

Looking at the previous five episodes it’s became clear to me that American Gods has barely put a foot wrong. It has been a perfect hybrid of fantasy, horror, drama, and some very off-kilter comedy, that I was beginning to wonder what an ordinary or average episode of the show would look like. A Murder of Gods answers that question. It’s not a bad episode of television but it’s definitely the worst of season one so far.

The problem here is that the show has introduced its first god that failed to make a lasting impression. A lot was made of Vulcan in the show’s promotional material: probably because he is a creation of the show rather than taken from the book. There are a lot of aspects of this storyline that work: the town if gun nuts, and Vulcan’s roundabout way of procuring human sacrifices is chilling. Ditto to his treatment of Shadow throughout the episode. I’m not entirely sure what this treatment is supposed to achieve: it could be the writers making a connection between gun nuts and racism. Especially with the frequent references to Shadow being lynched. In the in end Vulcan is more of a functional character than one in his own right. 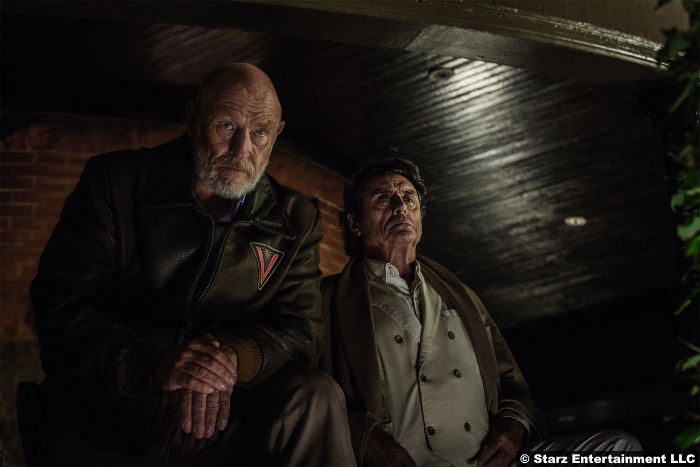 Through him, and his nifty little set up, we are shown the power that the new Gods can offer. Seeing this it’s not hard to imagine that many older Gods wold take this type of deal so at the very least Vulcan’s reasoning is solid. On the opposite side of all of this we are shown just how ruthless Wednesday can be. When he discovers the truth: that Vulcan has betrayed his cause, he takes his head off. Not only that, he has manipulated events in such a way that he can blame the new Gods for Vulcan’s death. Not only does this show Wednesday in a whole new Al Swearingen-like light, it also gives us a real example of a God’s death outside of the myths that start most of the episodes.

So that’s the episode’s weak point, and it’s really only weak because it doesn’t move the main plot forward as much as previous episodes have. So as average, which is a relative term here, as that plot of the episode was the rest of A Murder of Gods was solid without being truly mind-blowing. Then again, there is only two episodes left of this first season and American Gods needs to be given credit for the fact that table setting episodes rarely feel like that when you’re watching it.

A Murder of Gods isn’t just a setup of future plots: it’s a set-up of clear motivations that drive each character. Each character in American Gods has an active role in the plot instead of a passive one. So let’s go through each of these motivations and how they add to the episode.

I’ve already spoke about Wednesday, but to sum up, it’s clear that old Grimnir can manipulate any situation to his advantage. He has proven with his murder of Vulcan, and the subsequent blaming of the new Gods, that they aren’t the only ones that can control the narrative.

Shadow’s motivations are a lot simpler. He is trying to figure out if he is losing his mind. As a protagonist he may at times feel like a passive character, with much of the action happening around him, but the script gives him just enough agency, just enough curiosity, and with the inclusion of a certain dead wife, just enough of a “fuck it” attitude to keep going.

Laura may be American Gods best character mainly due to her expanded role. The more we spend time with Laura the more we realise how broken she has always been. Even at a young age she wished her family would just disappear. I know I bang this drum a lot, but Laura’s relationship with Shadow is so pivotal because it defines Laura herself rather than who she was to him. Her need to be with Shadow isn’t a love will conquer all kind of thing. It’s selfish: he made her heart beat, he made her feel alive again. It’s less like Laura loves Shadow and more like she needs him. The more complicated Laura’s behaviour becomes, the easier it is to see her motivations.

Mad Sweeny’s motivation is simple: he wants his fucking coin back Dead Wife.

What a lovely surprise to see Salim again. As another character that only appears in the novels “Somewhere in America” detours, it’s another point in the shows favour that Bryan Fuller and Michael Green have found a way to keep him in the story. Salim seems to be enjoying his new life travelling through America in the Jinn’s former taxi. That is until he comes across a dead woman and a leprechaun that’s over six feet tall trying to steal said cab. If American Gods isn’t careful it might turn into a show in which to amazing road trips are warring for attention. Salim’s motivations are simple. He has been given a new life by the Jinn, and he wants to see him again and thank him for it.

Each character has a clear, relatable motivation; something that makes the plot run so much smoother than certain other fantasy or horror shows (cough, The Walking Dead).

7/10 – A Murder of Gods is a slighter episode than what has come before, but a clear sense of direction for each character makes it a vital but not spectacular instalment.