Throughout 2017 I’ve been thinking about the return of Twin Peaks. It’s less than a week away and, all of a sudden, I’m a little worried. I’m worried because in the 26 years since the show ended television has only gotten weirder due to its influence. Just look at some of the shows out this year: Riverdale, Legion, and now American Gods have taken post-modern television to new heights in 2017, and I wonder if, in comparison, Twin Peaks is going to look a little flat. I mean look at A Head Full of Snow. It’s an episode that is so strange, so beautiful, so unbelievably other, that at times I was so caught up in what I was seeing I had to watch it again because I forgot to look at it critically. A Head Full of Snow appears to be everything at once, so packed to the rafters with different plots, moods, and ideas that the only way to talk about them is one at a time. 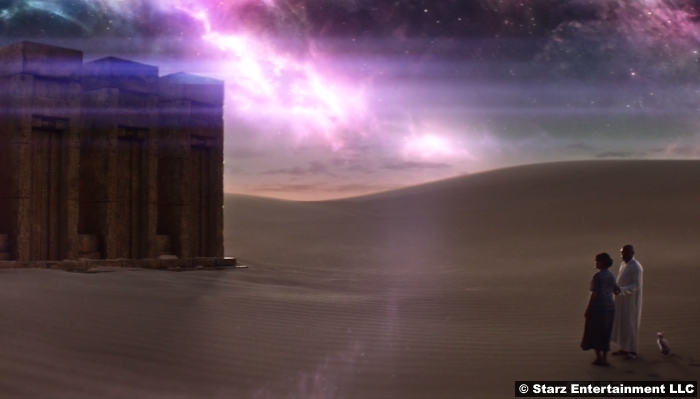 Let’s star “Somewhere in America” which switches up the series formula by showing us the end of a story rather than the beginning. Mrs Fadil is getting ready for her family visiting, talking to her cat while she prepares dinner. She uses a particularly rickety stool to get some ingredients from the top of the cupboard, the camera focuses on the stool tilting, preparing us for the inevitable fall. Yet it doesn’t come, she continues cooking until there is a knock at the door. Her visitor is strange indeed. Not her family but a man who claims that she has died, which turns out to be true. The man is actually the Egyptian god Anubis come to take Mrs Fadil to the next world, which isn’t in Queens. What follows is the first of the episodes many stunning sequences of other worlds, some of which are accessible by going up a huge fire escape. We share Mrs Fadil’s last moments, learning much about who she was by little details that she shares. When her heart is weighed on the scales she admits to hurting the first man who loved her, a regret she can now let go of. It’s a spell-binding sequence, perfectly rendered, perfectly acted and it’s only the beginning.

American Gods is expertly teaching us how to watch it, not only is it a serialised drama that follows Shadow and Wednesday as they gather old gods for a war against new ones, it’s also an anthology of immigrant stories, and the way they have brought their manifested beliefs to America. Anubis was brought to America by people like Mrs Fadil, so there is a perfect symmetry in him taking her to a new place. What may be a little disconcerting is that, as good as the main plot is, American Gods’ strongest moments come from these detours. 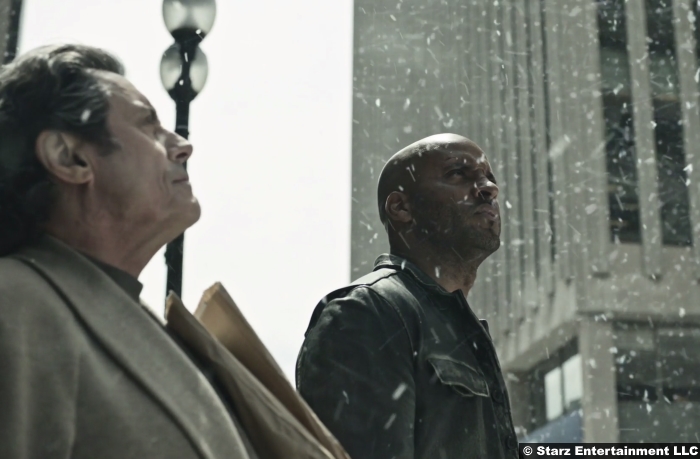 Take Salim’s experience as merely a visitor to America. Originally from Oman, Salim is here to sell, as he says, shit with a smile on his face. The level of disrespect shown to him is galling, but his smile is a shield from this cruelty. It’s no wonder he craves some kind of comfort, something he gets as he meets a taxi driver that speaks his language. The driver is just as frustrated as Salim, and he’s not afraid to show it. The two connect by talking about a tale of the City if Towers, the scripts first tip of the hat that not all is as it seems. As they are stuck in a traffic jam the driver falls asleep. In a tender moment, which again is completely sold by the performances and tone of the scene, Salim places a comforting hand on the driver’s shoulder causing him to stir awake and reveal his flaming eyes. The driver is a genie, and what follows is a scene so erotic, so packed with feeling, beauty, and amazing imagery that it becomes almost hypnotic. This isn’t just two men making love, in fact any sex scene in the show has had much more significance than just the act itself. It goes back to what Wednesday says about dreams: “What a beautiful, beautiful thing to be able to dream when you’re not asleep”. In the real world that would mean psychosis, but in American Gods it’s a chance to experience something bigger than yourself. 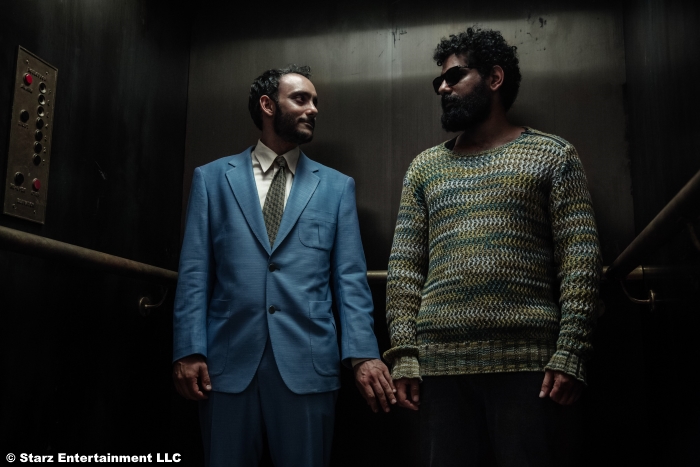 Meanwhile in the actual story things begin to move faster for Shadow and Wednesday. With Czernobog now on their side, the duo rob a bank in the least dramatic, but most entertaining bank robbery I’ve seen in a while. The trend of straight adaptation from the novel continues here, as Salim’s story, the robbery, and Shadow’s meeting with Zorya Polunochnaya are all lovingly recreated here. The latter meeting may be my favourite scene of the episode, as it was one of my favourite in the novel. This is what Wednesday was talking about, when the world looks this strange and wondrous, when the Big Dipper is actually the prison of a great bear that would devour the world if set free, and if the moon can be plucked from the sky and used as a form of protection, why would you ever want to wake up.

10/10 – A Head Full of Snow is American Gods most assured episode yet, with the writing, direction, and performances all coming together to create a world you want to believe in. It’s a must watch, with the added bonus of making Gillian Anderson’s Media more powerful if you do.