American Gods S01E05: Lemon Scented You – The new Gods show their hand in a plot-heavy episode

After four episodes of stellar character drama, American Gods uses Lemon Scented You to make sure that everyone completely understands what’s going on. The first half of the season has played with just how much Shadow knows, and understands, about what Mr Wednesday is up too. Much of what Shadow has seen could be explained by a mind that has been overtaxed with grief due to his wife Laura’s death, but that is ripped away from him when Laura shows up in his hotel room.

Shadow is a great audience surrogate as Ricky Whittle imbues him with enough personality, certainly more than in the novel, making his mixture of exhaustion and shock as Lemon Scented You only get crazier provides us with a trustworthy anchor in this tumultuous sea of an episode. Previous instalments have been happy to indulge in the shows more out-there aspects, providing perspectives on the power of these gods, the nature of their existence in America, and the power that belief holds. It has been a skilful introduction from Bryan Fuller and Michael Green, but this episode is all business.

Let’s start where last week left off: Shadow and Laura. Frankly this sequence is so good I wouldn’t have minded if this was the entire episode, just Shadow and Laura in the hotel room. They definitely have a lot to say to each other, but the fact of Laura’s continued existence means that there is a wall between her and Shadow. Thanks to last week’s Laura-centric episode, we know exactly what she wants from this meeting. She wants to reconnect with Shadow, realising she loves him more than she did when she was alive, that he is a solid link to her humanity. What’s crucial here, and what was missing from the book, is that even though Laura wants to be with Shadow, that wanting is the only thing that defines her. She’s not there to be the heart of the show, to be the pep-talking girlfriend. The fact that she isn’t dead anymore is a further complication for Shadow. Shadow is a symbol of Laura’s humanity because that’s what she needs him to be, rather than the show needing her to be.

Laura is a refreshingly complex female character, and a wildcard that no one planned for. It’s actually easier for me to view her and Shadow’s meeting from her point of view. The placement and editing of these scenes back this up. We pick up where last week left off, with Laura sitting on the hotel bed waiting for Shadow, instead of with Shadow, the lead character, entering the room. This s obviously the last straw for Shadow. It’s no wonder that he immediately brings up Laura’s affair, since that is a concrete thing that can be explain, maybe it’s even a little boring and realistic considering the week he’s having. Laura’s presence, as well as her autopsy scars are a stark reminder that the reality that Shadow is used to doesn’t exist anymore. If I was him I would be wondering if that prison was actually a gateway to another world, but then I’ve been watching to much Twin Peaks.

Alas, Wednesday comes to break up the party which leads to both him and shadow getting arrested. The interrogation of both characters is the show coming out and stating its purpose. Through Wednesday’s interrogation we get a summation of his plan. Travel around America recruiting old Gods to fight new ones. It’s the truth but it’s sounds so strange that no one takes him seriously. Shadow’s interrogation works in the opposite way: it’s used to introduce the power that th new gods possess, the ability that they have to track him down and throw him back into prison. These scenes act as a prologue to the episodes main confrontation. 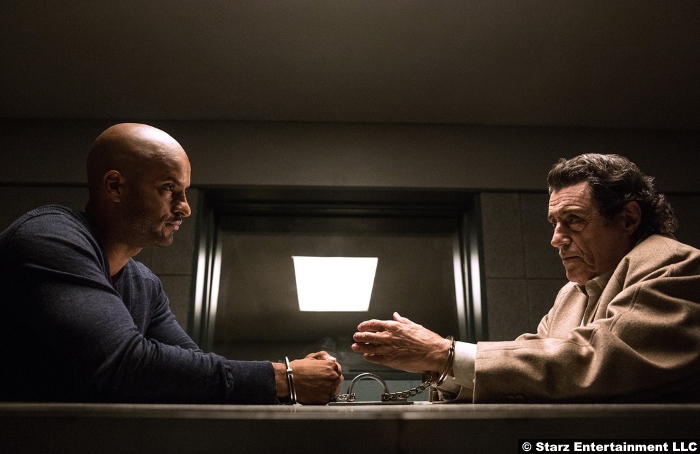 Before we get to that I want to briefly sing the praises of Pablo Schriber as Mad Sweeny. His scenes with Laura were fantastic, and provided a balance of comedy side by side with Shadow’s predicament. Their fight shows how powerful, and clever Laura is, and just how desperate Mad Sweeny is. Schreiber proved adept at playing larger than life characters as Pornstache in Orange is the New Black, but he has exceeded himself here. 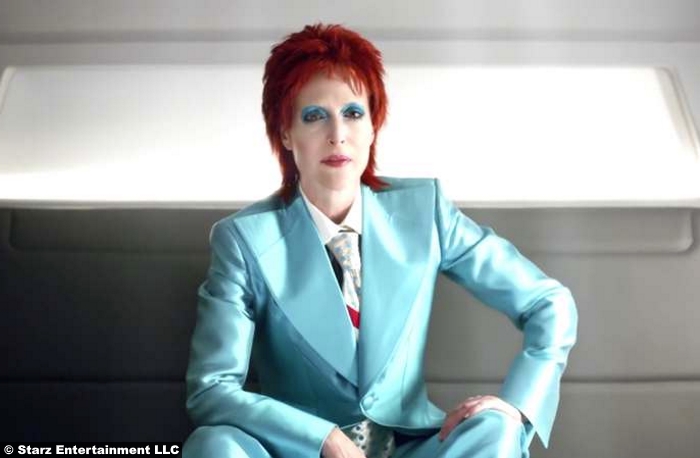 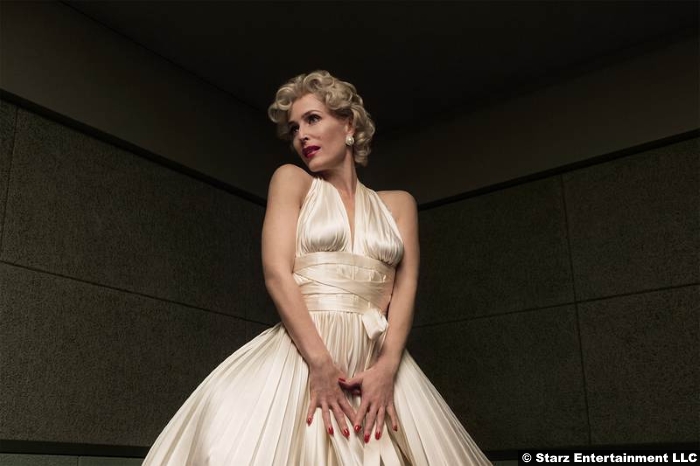 Now back to the police station. This is ours and Shadow’s first real taste of the new gods, with Media, Technical Boy, and Mr World all making an appearance. This is a brilliant episode for Gillian Anderson, proving herself as a chameleon by portraying iconic figures David Bowie and Marilyn Monroe. I’m officially putting her name in the hat for the next Doctor. The big reveal is the introduction of Mr World, played by the reliably creepy Crispin Glover. This is the god on the other side of this war, and he’s so confident of his position, even interjecting Wednesday’s definition of a truce by saying that they weren’t at war in the first place. American Gods is a weird show anyway, but director Vincenzo Natali manages to fill the interrogation room with the most expressive angles, keeping the audience and poor over-taxed Shadow, on the back-foot. This is an effective show of force from the new gods, the fact that they can decimate an entire police station and control the narrative to get away with it shows us just what Wednesday and Shadow are up against. I don’t fancy their chances.

8/10 – A little lacking in the beauty of the last couple of weeks, but this was an effective table-setter.