Roswell, New Mexico S01E04 Review: Where Have All the Cowboys Gone – More aliens to come?

I have to say that as annoying as I’m sure it is for Liz, I hope having to confront aliens when she’s in her pajamas is a constant on this show. Because it is hilarious.

Hello and welcome to I Didn’t Watch the State of the Union Because of Aliens. So let’s get into it. As you might remember from last week, a frustrated Max released some of his anger energy in the direction of town, which killed their electricity. 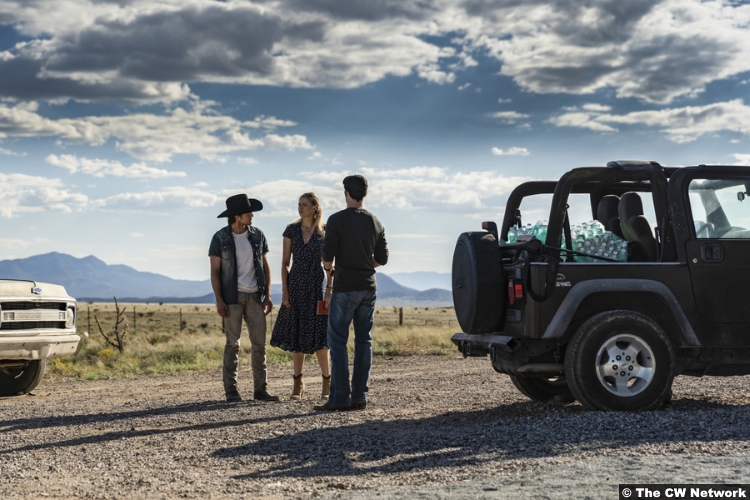 In the aftermath, the town tries to figure out both how to get the power back on and what exactly happened. Manes, of course, is immediately suspicious, especially since all the transformers have the same mark on them. After meeting Cameron, a fellow veteran, at the sheriff’s office, he asks for her opinion. Upon seeing the mark, she makes a plausible suggestion–maybe it was lightning. She doesn’t know that she’ll see the mark again.

That’s because the hospital is in the worst shape. Having no power really puts a damper on patient care, especially when you have, for example, a young patient in need of immediate surgery. That, plus Mr. Ortecho’s collapse and subsequent hospitalization, prompts Max to use his powers to juice up the hospital. It works, but it knocks him out, where Cameron finds him next to the power supply, which now has one of those marks. He makes up a story, but it’s clear she doesn’t fully buy it.

Meanwhile, everyone else is kinda stranded in their own storylines. Having loosened her grip on Max, Isobel is now determined to find out what was up with her Rosa flashbacks. She plays at practicing her power in The Wild Pony, but the real task for her there is getting into Maria’s brain. She gets more confirmation that Rosa didn’t want to see her that last day, but ultimately, she’s left with no new info. 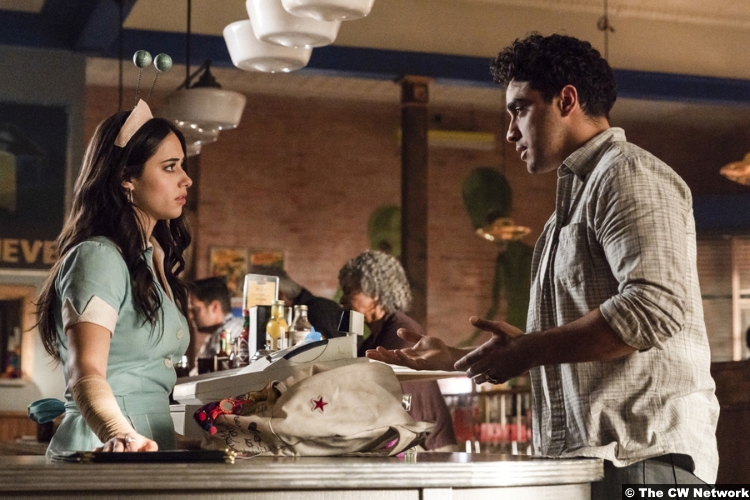 It’s pretty much the same for Liz. While superficially it seems like she learns something from Rosa’s ex, it’s not really info she can do anything with. She finds out that Rosa apparently had some sort of relationship with the late Jim Valenti, but since she doesn’t really know the contours of it, she’s just making wild accusations, which doesn’t make his son Kyle feel any better.

And despite the fact that they slept together in this episode, it feels like she’s stringing him along. And it feels the same way with Max. He’s the one, by the way, who charges into the closed Crashdown this time. And again, while I enjoy Liz having to have these confrontations in her PJs, I assume it’s not the same for her. 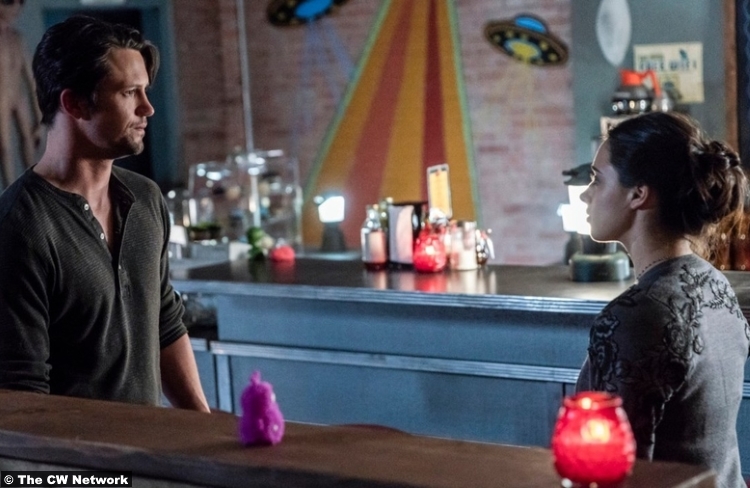 Their conversation is pretty much a repeat of last week’s, by the way. She doesn’t seem to think that Max killed Rosa, but she can sense he’s lying to her, and yeah. He absolutely is. But what exactly he’s lying about is still a mystery, like where their relationship is going. On that note, Max thinks that Isobel has gotten into Liz’s head and convinced her to leave town. And I get why Liz doesn’t tell him that she’s planning to stay, but it still feels frustrating. It’s one of those plots where you feel like a lot of this could be avoided, if people would just talk to each other.

That’s not the same with the final conversation the aliens have about Rosa’s death. With this one, it’s us that don’t have all the facts. After all, we don’t have any idea what really happened that night. But while I think we’re supposed to be shocked that Michael plans on confessing, again, we don’t have all the facts. I’m starting to think they don’t, either. I think they’re not entirely clear how it all unfolded. And that makes it even scarier.

7/10 – While this episode wasn’t bad–I particularly enjoyed that paper towels line–I didn’t think it integrated all of its discrete plotlines as well as previous episodes. I do like the overarching mystery, though, especially the possibility that the aliens are as much in the dark as we are. Could there be other aliens out there? (Yes, absolutely. Bring them on.)