The episode is called “The Red Dahlia,” a nickname given to Penelope, and she’s in the episode for like, five minutes. So that’s what kind of episode it’s going to be.

Also, it’s obviously a takeoff on the Black Dahlia, but she was a murder victim, not a murderer. Okay, I’ll stop.

Anyway, Penelope murdered her husband, his brother, and a bunch of other men. One man she didn’t try to murder, though, was Hiram Lodge. Hired by Veronica, who’s kitted out in full-on femme fatale mode, Jughead gets to the bottom of the mystery no one was that concerned about. (Sorry, Veronica.) It was FP, acting on behalf of Hermione. 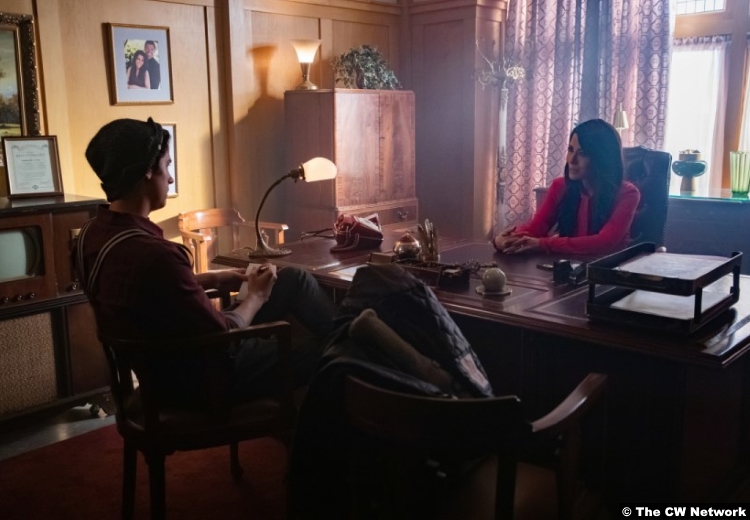 That is obviously a problem, as Hermione is the mayor and FP is the sheriff and oh yeah, also Jughead’s dad. FP can’t arrest himself, so they kill two Tall Boys with one stone and pin it on his corpse. FP was trying to apprehend Tall Boy for the attempted murder of Hiram Lodge, but it went sideways and Tall Boy is dead. Sure.

Since that’s solved, back to Penelope. We find out (from Jughead and Betty’s visit to her brothel, the Maple Club) that she killed Claudius because he was dumping fizzle rock runoff into Sweetwater. That’s what was causing the seizures, by the way. But wait, why was it only gir–oh, we’re moving on. So, why did no one in this increasingly corrupt town notice?

For that, Jughead tracks down Hiram’s mistress, who’s played by Mark Consuelos’s real wife Kelly Ripa. She introduces herself as Mrs. Mulwray and she’s not just a mistress–she also works for the Water Department. Mulwray and water, eh? Stand clear of the closing doors, please–next stop, Chinatown. 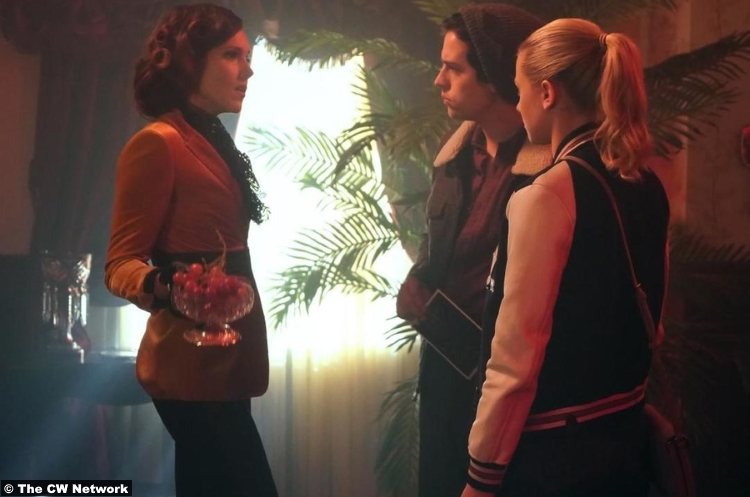 So she faked the water tests. Cool. And if you’re feeling sorry for Hermione, don’t. She also has a side piece and it’s actually-not-dead (former) Sheriff Minetta. Okay.

While Bughead are running around solving all her family’s mysteries, Veronica is trying to run her father’s mob empire. This involves her firing her dad’s last bodyguards, burning the fizzle rock supply, and enlisting Reggie to help her fool people into thinking Hiram’s doing just fine. That way, she can collect the money those people owe Hiram.

“Das sind Kinder!” I yell, because I haven’t stopped speaking German since last night’s Project Blue Book. These are children! Last week, they were taking SATs. Then again, I guess the fact that Veronica makes so many stupid decisions can be easily explained by the fact that yes, she is a child playing at being a player. 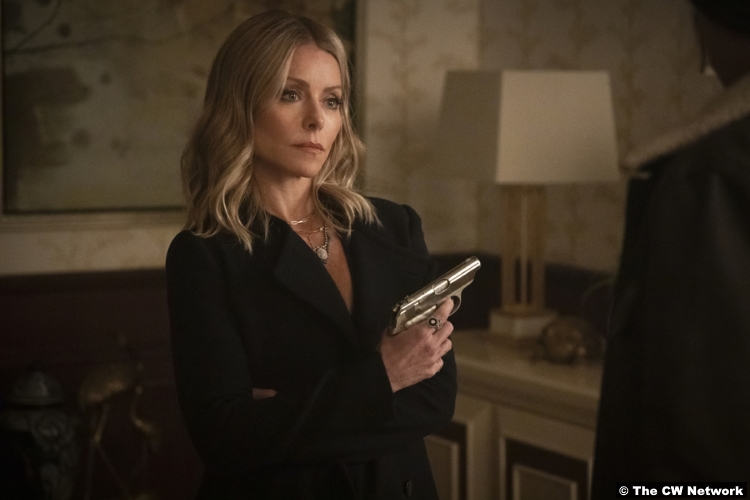 Burning the fizzle rocks is the worst of it, though, and not just because both Veronica and Reggie stand right next to the pile as it’s burning. Apparently, Hermione had already sold that supply to a mysterious someone that will probably turn out to be Penny or Hiram in a wig. Or, and I’m pleading here, Edgar Evernever. She can’t give that someone back their money because she used it to pay off the governor, as one does.

I am so tired. Oh, where was I? Uh, Sheriff Minetta is now actually dead. Hermione shoots him. Anyway, he was part of the plot to frame FP for the crime he tried to commit (murdering Hiram), so at least that’s one less player in the game.

And Archie, who came back to town last week and then immediately forgot about his resolve to change, also tried to kill Hiram this week. He ends up saving him by wounding Minetta, so Hiram and Archie achieve a tentative peace this week. It’s not unlike the agreement Hermione comes to with Jughead, a kind of mutually assured destruction. “These are children!” I yell out my window in Chinatown. Forget it–it’s…you know the rest.

7/10 – While I appreciate someone’s obvious love for film noir, I wish they’d used it for a better episode. This one was a mess, a hodgepodge of influences and references competing for time with a muddled mix of storylines. I feel like I forgot something that happened, but I also feel like I just took the SATs. This could have been fun, but instead, it felt like a chore. At least next week’s episode looks nuts (but in a good way).