Roswell, New Mexico S01E02 Review: So Much for the Afterglow – These 90s-inspired episode titles are wonderful!

This week in Roswell, it’s the 10-year anniversary of the crash that killed Rosa Ortecho (Amber Midthunder) and two others. As you might expect–especially judging by the shooting last week–this day brings up a lot of bad feelings for the locals. Not that they have a shortage of those, anyway.

To that end, Kyle is still with Master Sergeant Manes, who shows him a picture of an incinerated corpse he says is “Hector Valenti,” Kyle’s grandpa. And man, he’s really laying this on thick. You’d think someone would ease into the whole “ALIENS ARE REAL AND THEY ARE OUR BLOOD ENEMIES” speech, but go off.

Anyway, Manes assumes that Kyle saw the handprint on a corpse as well and unfortunately, Kyle disabuses him of that notion. So now Manes knows there’s a living person, a witness, who can ID an alien. Cool, cool, cool. 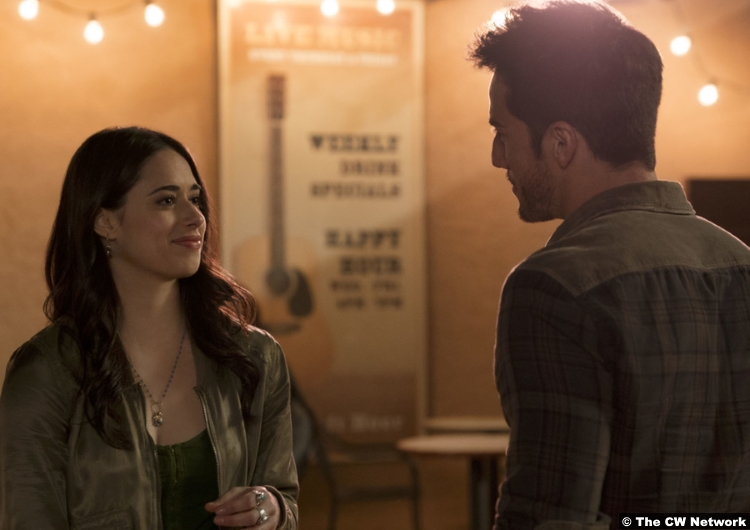 Thankfully, he doesn’t give away Liz’s identity, because she’s got enough on her plate. Not only is it the anniversary of her sister’s death, but she’s also got all these Max feelings to reckon with. According to him, the handprint makes her feel “an echo” of what he feels for her, but it’s not real. She does have feelings for him, though, and cajoles him into meeting her when the handprint fades. So they can *heart eyes emoji* kiss for real.

Meanwhile, she wants to look deeper into Rosa’s death. Specifically, she wants to see the autopsy report, so she can see what drugs exactly fascinated Rosa so much that she’d give herself over to them, even if it were fatal. Kyle, who is sworn to secrecy on the wholes Manes thing, promises to look it up.

And while she’s got that going on, she’s also visited by Isobel and Michael in the Crashdown. Michael does some alien magic to intimidate her, but frankly, it’d be a lot spookier if Liz weren’t in her pajamas. As it is, she’s practically like, “I got out of bed for this?” One of his moves is throwing a knife across the room into a cake, but no way would the cafe leave a cake uncovered like that. Anyway, Max shows up and they argue about it. 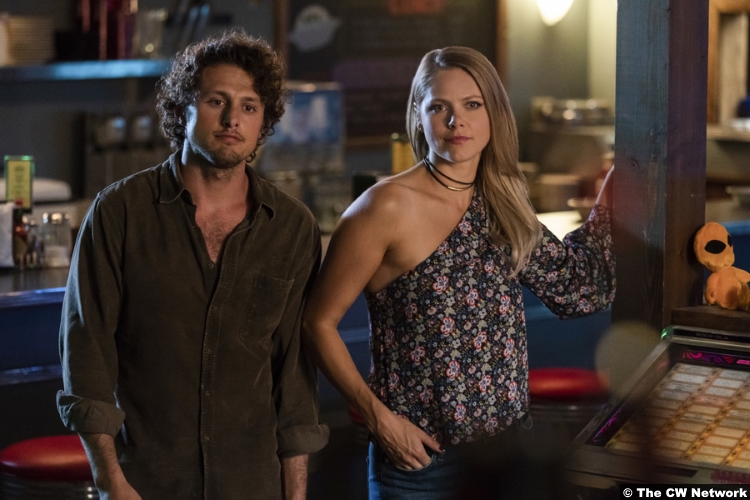 Isobel and Michael leave, but they’re still convinced something’s wrong with Max. And there is–he’s in loooooove with Liz. It’s so obvious that there might as well be big red cartoon hearts coming off him. Still having Rosa on the brain, though, she asks Max to show her some memories of Rosa.

Some are memories she was a part of. (And can I just say that the way they use backward ball caps as a shorthand for “Max, but younger” is very endearing?) But there are others she didn’t see, like Rosa writing “fraudulent zodiac” on her hand. Apparently, she was always doing that–writing things that she liked on her hands.

Later, Liz asks Maria about the phrase. It’s 90s Night at the Wild Pony and a girl who sounds like this is warbling cover songs in the background. That’s appropriate, because that’s what the phrase is–a lyric from Third Eye Blind’s “God of Wine.” It’s strange, though. Maria thought Liz didn’t see Rosa the night she wrote it, which was the night she died. That, of course, means Max did see her. 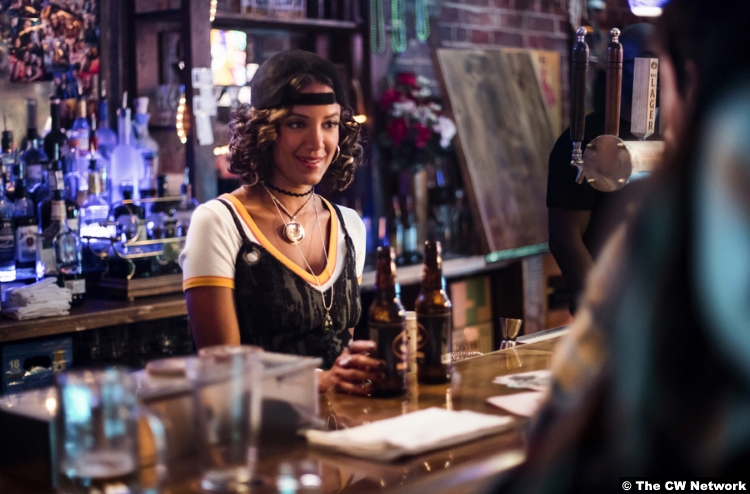 Max and his partner (Jenna) Cameron (Riley Voelkel), meanwhile, are tracking down the shooter. It turns out his sister was one of the crash victims. Unfortunately, it’s not fast enough police work that another guy isn’t mistakenly picked up and sent for deportation or fast enough that the shooter and his buds beat Mr. Ortecho (Carlos Compean).

Max is about to have bigger problems, though. Kyle has found Rosa’s autopsy. At first, the results seem unsurprising, if not horrifying. The report states that Rosa had a wild mix of drugs in her system and sustained a number of injuries, including burns to 80% of her body. However, as Kyle points out, the autopsy mentions her appendix, which Rosa didn’t have.

So Kyle did some more digging and found the actual autopsy report. (I wonder if it were in the Project Shepherd files.) The first thing in the file is a photo of Rosa postmortem. And there is an unmistakable handprint across her mouth.

Hmm, sorry, Max. I guess your love story’s on hold for now.

8/10 – There was…so much plot in this episode that I couldn’t pack it all in. Like, Alex and Michael are continuing their whatever-that-is and I love it, but I couldn’t shoehorn it in. And Max going to hook up with Cameron, which is apparently something they’ve done regularly. Good for y’all? I also loved the retro night–these 90s-inspired episode titles are wonderful, by the way. And finally, I loved putting some tension between Max and Liz. Although as a marshmallow, I will probably ship them [I am already shipping them], it would be a much less interesting show if they just got together immediately and everything was fine. Everything ain’t fine now.

Sidenote: The acetone. Back on the original, the alien kids put Tabasco in everything because they liked things very sweet and very spicy. But acetone, which seems to be the reboot’s version, seems to be more like alcohol. Kind of like how the Newcomers on Alien Nation got drunk on sour milk. (Yes, I have watched every show about aliens.)