Most of the action on this week’s Riverdale takes place at Leopold & Loeb Juvenile Detention Center, whose name I hope makes me stop shrieking soon. I praised the show last week for their realism in handling Archie’s ride to the Center, but don’t worry–they jettisoned all that real quick-like this week.

*Cut to me googling “do they still delouse prisoners?* [Answer: Sometimes, but now they do it with a spray, not the powder.] 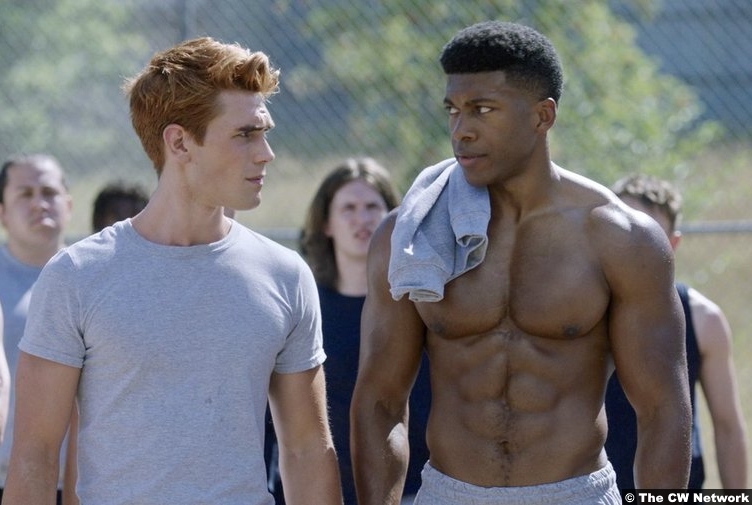 Take Archie’s roommate at L&L, for example. Mad Dog (Eli Goree), who has like, a 16-pack–just look–also apparently has a fondness for 40s-style pin-ups. You know, as modern teenage boys do. And I don’t mean that he has some photos of rockabilly gals on the wall–I mean that he’s got drawings that look like they were painted on WWII bombers.

If that’s giving you Shawshank vibes, then they’re just starting. The warden (William MacDonald), who’s even named Norton, has “tapped” Mad Dog. That means that he gets benefits other prisoners don’t, like the pictures and a TV. They’re cold comfort, though–as he later tells Archie, he really had no choice. Warden Norton cut off his family visits. It’s unclear what he has to do in return, but I’m sure we’ll find out, as Archie has been tapped by episode’s end.

But where’s Mad Dog? See, about that. The Shawshank Redemption morphed into The Longest Yard, as Archie gave a brutally cringe-inducing speech about the beauty of high school football. He’s going to unite them all, Ghoulie and Serpent alike, through the beautiful power of pigskin.

Did I mention this is after he’s had his ass kicked and his shoes stolen? And yet somehow, this speech doesn’t spark yet another ass-kicking. In the sideways world of Riverdale, the boys actually agree to play a game.

They have themselves a grand ol’ time, especially when the River Vixens show up and do a whole routine to “Jailhouse Rock.” At this point, as the boys were clinging to the fence, I was like, “Okay, there is no way this would be allowed.” But I wasn’t expecting the riot squad to show up. In the ensuing melee, the boys are all beaten. Mad Dog, who wasn’t even there, is listed as having died in the riot.

Meanwhile, back in Riverdale, Wikipedia Brown and Sally Kimball, also known as Jughead and Betty, are on the case of the Gargoyle King. Dilton sadly died (of cyanide poisoning), but Ben is recovering in the hospital and wait–we’re just gon’ skate over the fact that his last name is Button? Sure. 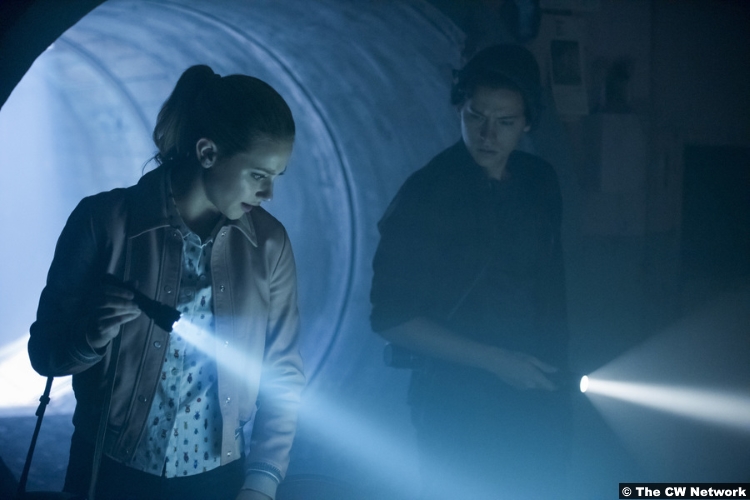 After finding out that Ethel visited Ben (and left a real witchy talisman in the room), Jughead and Betty visit her. She tells them about Dilton’s bunker in the woods, where they’d all play Griffons and Gargoyles. So, of course, they visit the bunker. The first time, they’re turned away by a spooky-ooky living Gargoyle King. They literally turn tail and run. I don’t get this, really. Just push him. It’s just a dude. Probably.

When they return to the bunker, they find a missing scout, a member of Dilton’s troop, hiding inside. They also find cyanide and the mysterious blue liquid from last week–it’s not not Flavoraid. After that, they’ve obviously got to talk to Princess Etheline again. She almost immediately has her own seizure, as new transfer student Evelyn Evernever (Zoé De Grand Maison), Edgar’s daughter, looks on. 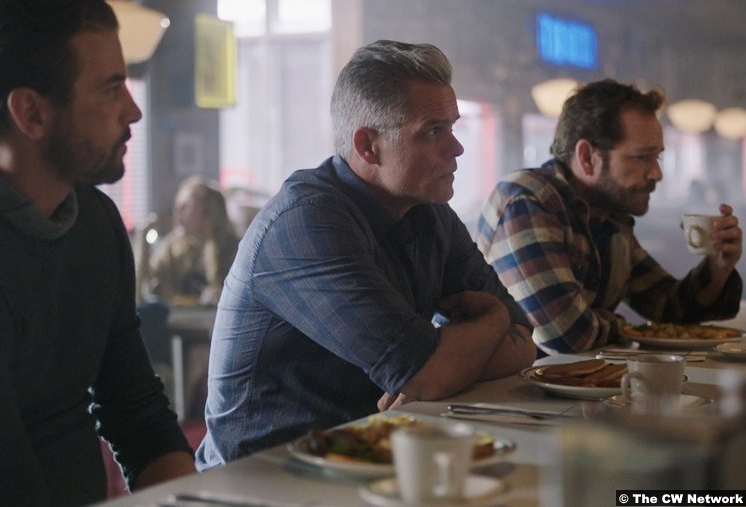 While Veronica is starting her own chapter of the Innocence Project–don’t you need lawyers for that?–and being banned from visiting Archie under her own name, thanks to Hiram, he and the rest of the parents are meeting in Hermione’s office. She has to share grave news, which is about the state in which Dilton and Ben were found. Specifically, they were in the woods with blue lips, which means something to the assembled parents. Something has come back, dun dun DUN!

Back at the hospital, Ben has regained consciousness, but only long enough to tell Betty and Jughead that he’s going to ascend now. Then he topples out the window.

8/10 – Now that I’ve detoxed Archie’s speech out of me, I like the bulk of the episode. The Gargoyle King is a nice change from all the Black Hood shenanigans of last season. It’s effectively creepy and so is young Evelyn. She’s such a creep, in fact, that it’s going the opposite direction and making me laugh.