After seeing Gryphons and Gargoyles go viral at Riverdale and after receiving an autopsy file that describes someone dying in the 90s with blue lips, Betty confronts her mom to find out more, including why she and FP freaked out so much about the game manual. Presumably, because the cult has been influencing Alice to be honest, she tells Betty how it all happened.

Hop in the wayback machine, because we’re going back to the 90s. Or at least, something that kind of resembles the 90s. Much in the way both Riverdale and Chilling Adventures of Sabrina muddle time-signifying trends, Riverdale’s version of the 90s is also an amalgam of influences. Mostly the 80s, judging by the fashion and music. 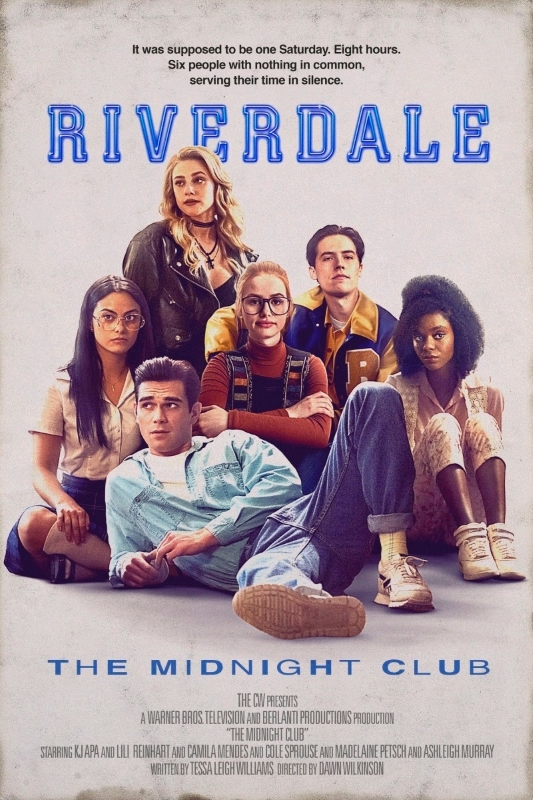 Perhaps that’s because the most obvious inspiration for this episode is 80s classic film The Breakfast Club. To that end, Anthony Michael Hall plays Riverdale High’s old principal, Mr. Featherhead. (Sure.) Alice, Sierra, Hermione, and Penelope all end up in Saturday detention due to a fight between Penelope and Alice in the girls’ room. Alice has just found out she’s pregnant and so, she’s understandably on edge. Fred and FP (Alice’s clueless baby daddy) got caught streaking, which was really more of a 70s trend, but okay. Anyway, all the younger actors are playing their parents. 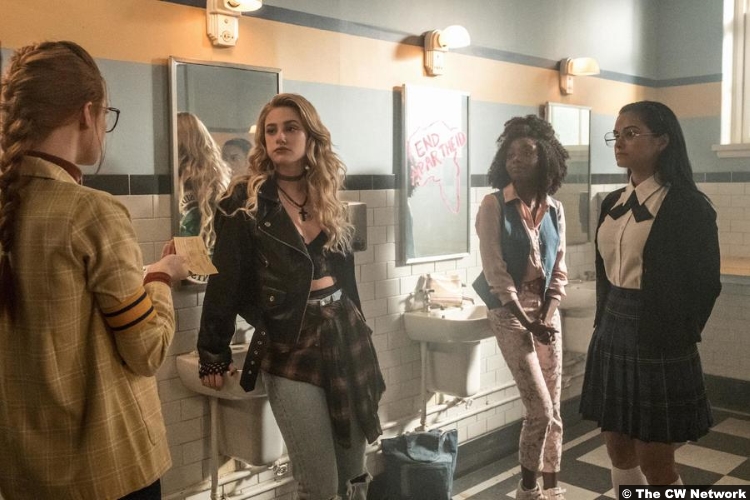 They’re sentenced to one detention, but once Penelope and Hermione get in their own fight, everyone is punished with an additional month of Saturday school. Looking for the “Game Lad” a teacher confiscated from her, Hermione finds a world of treasures, including the G&G manual. They start playing the game, since they really have nothing else to do–remember, no internet yet–and get way into it. Like, breaking into the school at night–hence the episode name–and wearing costumes into it. I’m not sure why they had to break in, though. They could have played anywhere–Fox Forest, Pickens Park, the Drive-In, that one culvert where Alice and Betty left that rando’s body. 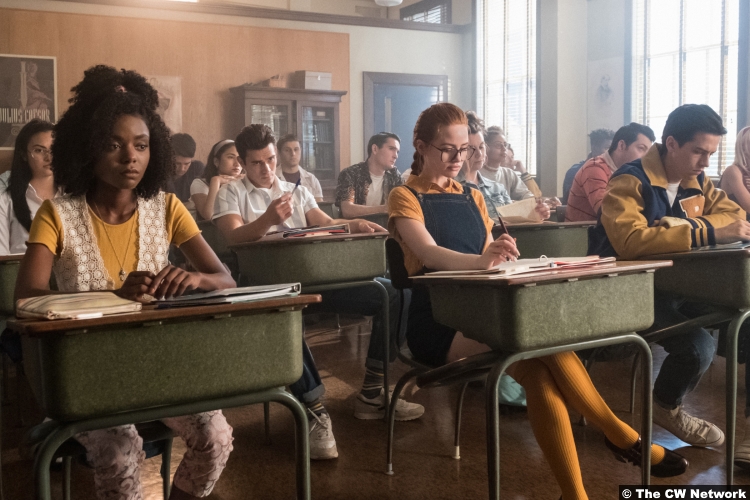 But playing at the school gives them the opportunity to run into another group of G&G players–namely, Hiram, Tom, Darryl Doiley, and Marty Mantle. (All are played by the younger actors who play their children, save Hiram, who is sadly not portrayed by Camila Mendes with like, a mustache. He is played by Mark Consuelos’s real-life son, Michael Consuelos.) They all team up to play together and it’s going wholesomely until the night of the “Ascension Party.” The invitations were from the “Gargoyle King,” and they all just assumed it was one of them. Maybe it was. 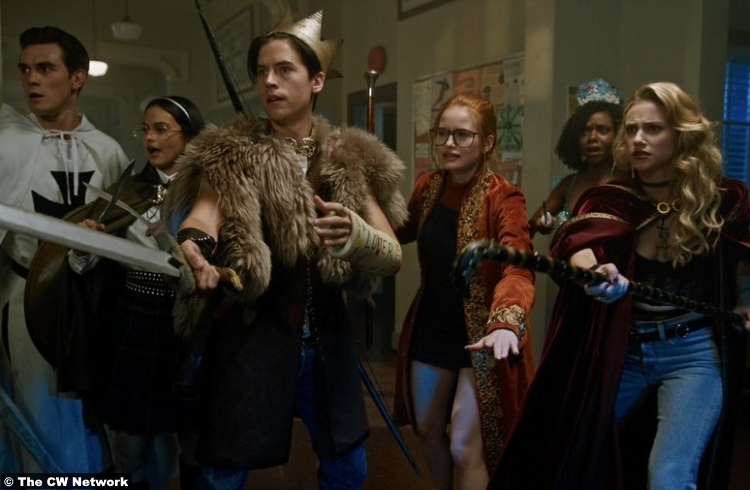 Anyway, young ruffian Hiram brings the classic 90s drug “fizzle rocks” and everybody gets high AF, except for Alice. When she gets sick and goes to the girls’ room, there’s a pair of chalices waiting for her. Someone kitted out as the Gargoyle King is in the hall when she leaves and she’s like, “I’m good, love–enjoy.” She goes home, but not without missing Principal Featherhead showing up at the school.

A week later, everyone’s shaken by the experience. Fred’s dad died that night and as his main post-school plan had been to stay in town and take care of his ailing father, he’s upset. But nobody so far has a fate worse than the principal. He hasn’t been seen since the night of the party, but the gathering flies lead a school janitor to a closet and Featherhead’s body with its blue lips.

The “kids”–or rather, the parents–decide to shut up and never talk about the game again. They drift apart and become closer to the people we know today. Some of these transformations were especially sad. Knowing, for example, that Tom and Sierra have been in love since high school, but had kept their relationship hidden due to their disapproving parents, makes it extra sad when we realize how long it’s going to be until they’re together again. 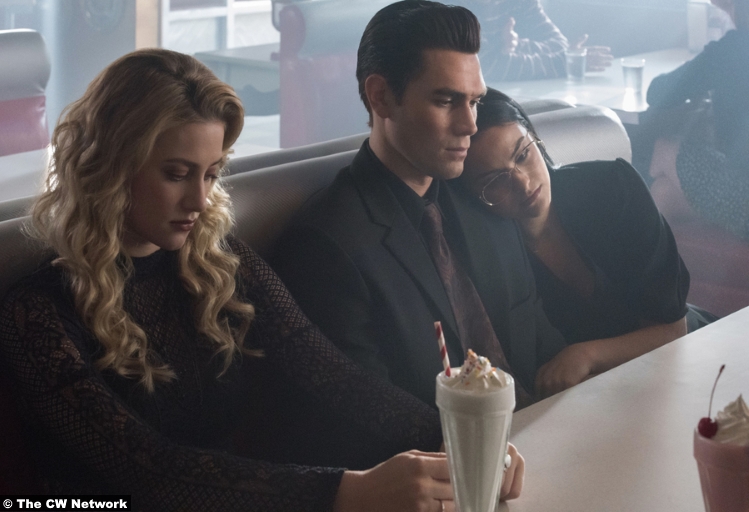 But we also get to see a side of Penelope that makes her more sympathetic. Once an orphan at the Sisters of Quiet Mercy, she was handpicked by Clifford Blossom’s parents to be both his sister and his eventual mate. *five second long gagging noise* She seems not fully resigned to her fate at the beginning of the episode, but after the night of the party, she clings to the safety of Thornhill.

And that’s the way things were. Of course, it still leaves some questions, like who set up the poisoned chalices or the party itself? And who is dressing up as the Gargoyle King? Or is there a real Gargoyle King and this is the beginning of our crossover with CAoS? Also, FIZZLE ROCKS?!

Armed with this information, Betty has no intention of playing the game herself, but she’s about the only one. She busts into the bunker to find Jug playing with Cheryl, Toni, and Sweet Pea. Jug may have gotten into the fizzle rocks, because he’s raving about how it’s all becoming clear and he’s just about ready to ascend. Weird flex, but ok.

10/10 – I have absolutely no idea if the game is real or if something else hinky is going on and I love it. Also, despite the weird anachronisms–coincidentally, I watched this following a showing of Mid90s–I was able to invest fully into the flashback world the episode created. That’s not to say that things couldn’t go wildly sideways–I know I’m not the only one who doesn’t want to see the repetition of last season’s many red herrings–but so far, it’s a lot of fun.