In January we looked at the brilliant comedy-slash-philosophical examination that is Groundhog Day. in February it was Sleepless in Seattle, easily one of the greatest “romantic-comedies” in history. In March we remembered the late-great Robin Williams and the endlessly-rewatchable comedic stylings of Mrs. Doubtfire. In May we looked at the thrilling mystery, The Fugitive.

If we were to poll the audience and ask what was the best representation of Batman on the big screen, what answer would take the top spot? Very likely it’s Christopher Nolan’s interpretation of the character in the Dark Knight trilogy. And there’s no denying the masterwork that trilogy is, especially the middle entry, but looking at it from a comics/purist perspective, is it really right to say that’s Batman as he was on the comic page? It’s a gritty, real-world Batman; the kind of character you’d dream up if you said “how would Batman work in a world with real rules?” But it’s not right to say the Nolan movies are the “comics come to life” interpretation of Batman the way, say, Iron Man or Spider-Man:Homecoming are to their respective properties.

For a long time, people pointed to Tim Burton’s first Batman movie (often dubbed Batman ’89) but, looking back, though the movie is great it’s also a far cry from comic-accurate. Batman casually kills, is highly immobile and does little to no detective work. It’s a great blockbuster movie and, as a product of its time, is critically important. Ultimately though, it’s not “comics come to life.”

Batman Returns followed Batman ’89 and it was even more of a departure, with dark and macabre visuals and Burton’s (delightful but basically wrong for the character) dark sense of humor. Joel Schumacher took it from there and turned in a mediocre debut outing with Batman Forever, and followed it up with Batman and Robin, a movie so pathetic you can almost squint and like it in spite of itself, the way 1920’s circus attractions were admired. Really though, it’s far too stupid to be effective camp (which helped turn Adam West’s Batman ’66 into one of the best Batman movies ever).

Zack Snyder (with an assist by Joss Whedon) had a pair of takes on the character with Batman v Superman and Justice League giving us the most recent interpretations. Say what you want about Batman v Superman, the movie at least nailed the look and feel of Batman, better than any live-action movie had before. I mean just look at this: 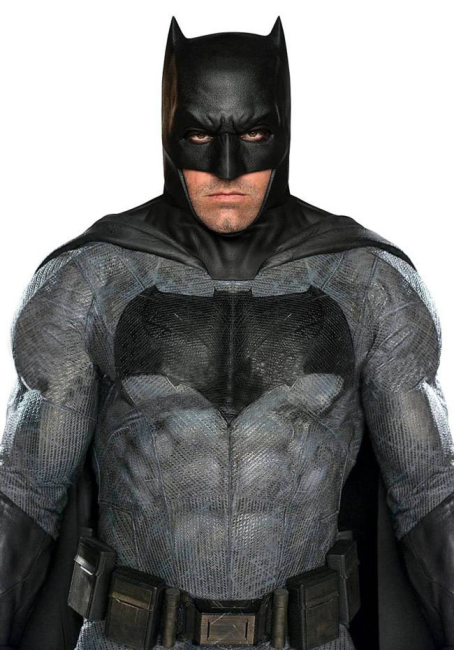 But the movies around him were sloppy, flawed, and in the case of Justice League, woefully underdone.

No, the most comic-bookey Batman has ever been on the big screen is a movie that most forget actually had a theatrical release: Batman – Mask of the Phantasm. 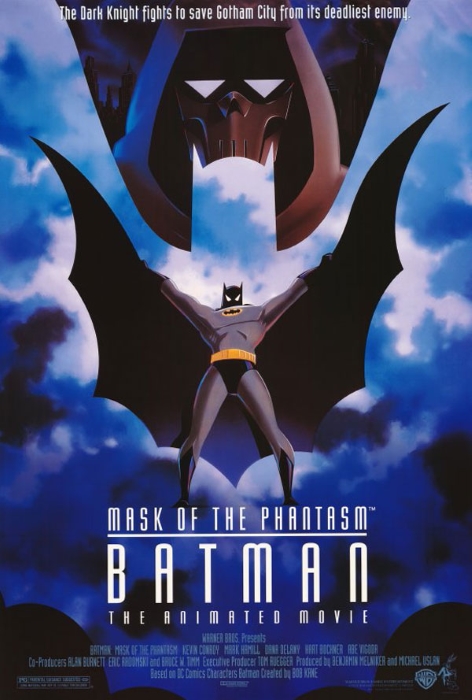 Originally conceived as a direct-to-video movie, Mask of the Phantasm was made in the shadow of the first season of Batman: The Animated Series. The animated TV series proved so popular and so well-made, Fox put it on their primetime lineup. What made it so well-done? On the one hand it’s almost unfair to say “it looks like Batman!” After all, this is an animated series, anything can look like anything when you just draw it; it’s a lot harder striking that balance between form, function and cinematic flair in a live action setting. It’s not impossible though… 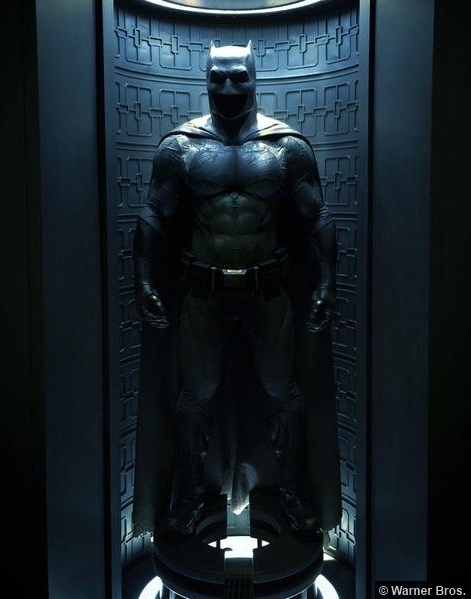 That being said, there’s more to Batman’s visuals than just the distinctive Bruce Timm character designs; the entire art-style of the series basically defined what Gotham City was for a generation of fans: The weird mix of futuristic and retro/art-deco painted with muted colors on black backdrops (as opposed to the typical white backdrops for other animated series’) added a distinctive flair to the series. Voice acting was likewise great, with Kevin Conroy’s Batman and Mark Hamill’s Joker being especially character-defining.

But a “cartoon show” is one thing; a “feature film” is something else. 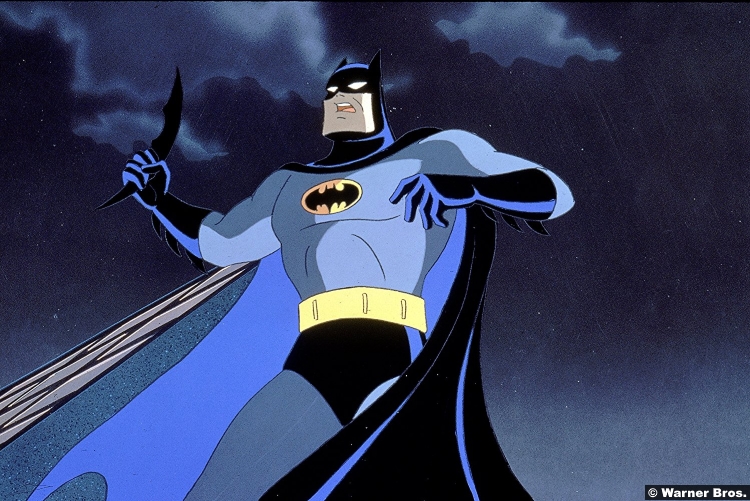 What’s so remarkable about Mask of the Phantasm is how the creators did not yield to the temptation to fix what wasn’t broken in making the move to a full-length movie. Granted, the initial order was for a home-video release and by the time Warners decided to release it in theaters, there wasn’t time to do anything more than plow ahead (the movie had to be done in one year, as opposed to the standard two that most animated movies need to be produced). Nevertheless, I have flashbacks to the mood lighting and weird redesign choices on the Enterprise-D in Star Trek Generations. Mask of the Phantasm avoids this; it’s the same great show, just on the big screen. 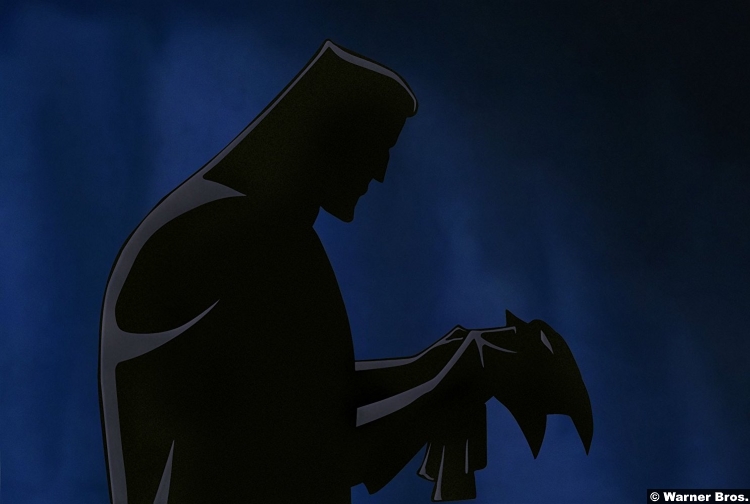 Where the show did scale-up for the movie was in the story, and since it was the stories that really elevated TAS above other Batman shows/movies, it’s good that the story was likewise not short-changed (not to mention Star Trek twice, but…the way Star Trek 09 and Star Trek Into Darkness both dumbed-down their franchise in a vain attempt to appeal to casual audiences; Mask of the Phantasm didn’t do that).

While the Joker is a major player in the movie, it’s a new villain that gets center-stage: The Phantasm is not directly based on any Batman villain from the character’s then-fifty year history but is instead a new creation. Instead inspiration came from the Grim Reaper (with his skull-like mask, tattered cloak and scythe-like hook). Considering Batman’s rogue’s gallery is rightly regarded as the best of all superheroes, that’s a bold move to ask fans to buy into an unknown villain as a reliable threat to Batman, but the story is so heavily character-based the new addition works and Phantasm is now placed in the same pantheon as other long-time baddies like Killer Croc, Solomon Grundy or Dead Shot; not the top-top guys but up there. That’s a big accomplishment. 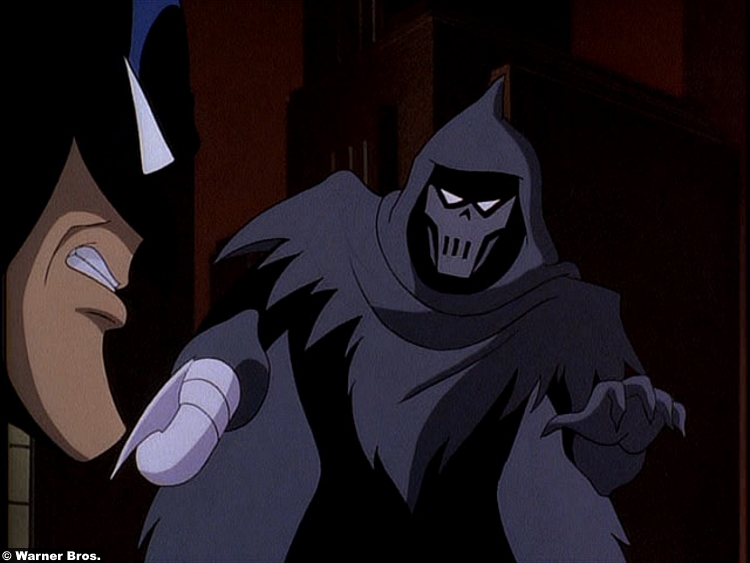 Without giving away spoilers, the movie has some great twists and surprises that shocked the third-grade me; grown-ups will likely see things coming, but the target audience will be wowed. It has some great set pieces and action scenes that, while lacking the pizazz of their live-action counterparts are often more impactful because they are woven into a story that engages, alongside a movie that is competently made (something which can’t be said for most Batman films).

Mask of the Phantasm came out on Christmas Day, 1993. It was a rush-release with little marketing and despite a meager $6mm budget, it only made a little over $5mm in theaters. It wasn’t disliked; it was overlooked. It was missed. But time has been good to it and today it is considered a cult classic, an excellent representation of Batman on the big screen and a movie that is still awesome, twenty-five years later.