Electric Dreams S01E10: Kill All Others – Inconsistent first season goes out on a high

NOTE: ‘Kill All Others’ is listed as episode 7  in some locations however Channel 4 have aired it as the 10th episode of season 1’s Electric Dreams

Before Electric Dreams debuted last autumn there was a renewed interest in Philip K Dick’s work due to the release of Blade Runner 2049, the sequel to the movie that introduced Dick to a wider audience only months after his death. Perhaps the main theme of both Blade Runner movies and has since become the theme most associated with Dick’s writing is the question of what it means to be human. Many episodes of Electric Dreams have dealt with this question: with the precog-hate in The Hood Maker, to Greg Kinnear’s imposter father, and most skilfully in Human Is. As an avid reader of Dick’s novels and short stories, and watcher of even the worst adaptations of his work, I think his main statement as a writer is much simpler than the question of humanity. Dick’s most burning question, his most common theme, was questioning what is real.

Every episode of Electric Dreams has featured this theme. From the trippy ending of Impossible Planet, to the film noir-tinged double-crossing of Crazy Diamond, to an entire village of androids in Autofac. Kill All Others may be the best example of this theme, mainly for how well writer and director Dee Rees keeps the viewer in the same tenuous position as poor Philbert Noyce. In a first season that rarely elevated Dick’s work any higher than good, Kill All Others stands as one of this season’s best episodes, and certainly the best purely science fiction episode.

Based on Dick’s short story, entitled “The Hanging Stranger”, Kill All Others introduces us to Philbert Noyce, a man that doesn’t seem to fit in the technological consumerist society that surrounds him. Philbert is a citizen of Mexuscan, a mega-nation of in the year 2054 that is almost fully automated and governed by a single party system represented by Vera Farminga’s The Candidate. Philbert, played by The Last Man on Earth’s Mel Rodriguez, is clearly out of sync with the world around him. We first meet him as he’s shaving in the bathroom only to be interrupted by a life-sized virtual mascot for a shaving company. In 2054 ads aren’t just interrupting YouTube videos, they’re messing with bathroom time, and in the case of one smooth coffee mascot, having a deeper relationship with his wife than Philbert does. 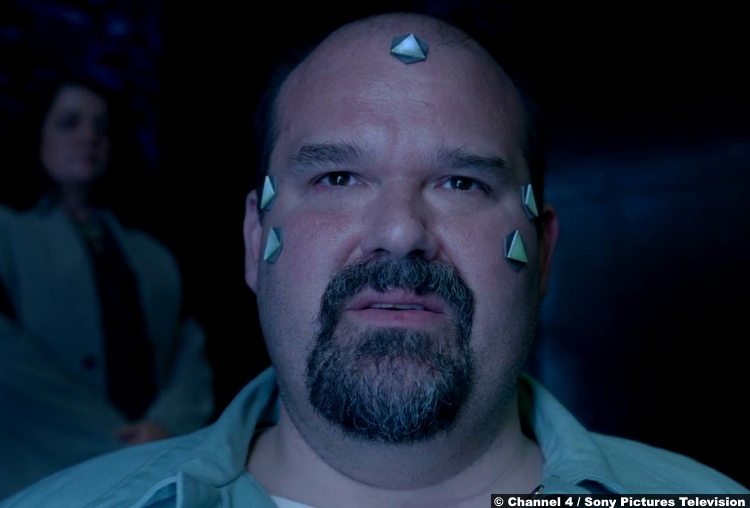 Philbert’s life is going fine until he catches a broadcast of the Candidate on the campaign trial in which she tells the audience to “kill all others”. In a society that seems to be ruled by the manipulation of language, this is a huge deal: a noted government official telling citizens to kill. At least that’s what Philbert thinks, but no one but the very few seem to have realised that the Candidate even said those words. Unable to get it out of his head, as well as the posters that suddenly appear with these same words, Philbert’s life starts to spiral out of control: leading to isolation from his co-workers, his wife, and two run-ins with super-creepy law enforcement officials.

What makes Kill All Others work so well is its tone, and pacing. While the design of the Chicago of Mexcuscan is appropriately futuristic: sharing Safe and Sounds penchant for designing utopia-seeming societies with bright colours, we’ve had ten episodes of this type of world-building, making it hard to be impressed with what has become so familiar. This means that there is a much bigger role, in my mind at least, for performance and story. Mel Rodriguez is brilliant as Philbert: his growing paranoia is communicated with palpable anxiety, but also a light comic touch from this excellent comedic actor. It’s Rodriguez’s episode, meaning that know one really matches him, which is fine since the rest of the characters are so intrinsically part of this world in a way that Philbert is not that it works. In saying that, Vera Farminga is eerily good as The Candidate. She brings a real sense of political slime to the role, and her ageless face can turn from ingratiating to pin me to a wall terrifying in the blink of an eye. 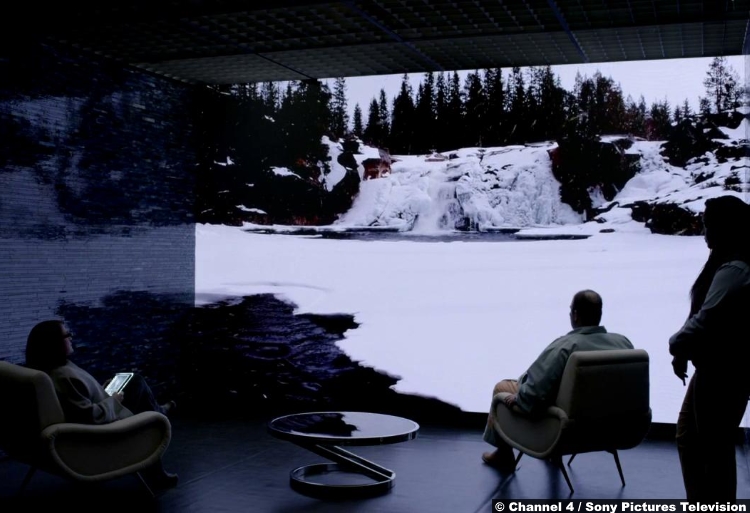 The real star is Dee Rees, who manages to tell what should feel like a familiar story with the right sense of unreality that her main character is feeling. The title of the episode makes the questions simple: who are the others? What are the others? Why kill them at all? As Rees tightens the screws Philbert realises the horrible truth: it’s a trap. This is a society in which voting isn’t about picking a winner to run the country, there’s only one party. Instead, voting is about the process, giving it a symbolic meaning rather than a practical one. This could only work in a society when the people are sheep, when they accept what is put in front of them and question nothing. Philbert’s act of questioning why the Candidate would say “kill all others” immediately makes him an Other. When he tries to prove that he isn’t an Other he alienates himself from his wife, who he suspects is now working against him, and his friends.

This all culminates in one of Electric Dreams’ most indelible images. Philbert hangs dead from a billboard proclaiming these very words, and is ls solidified as an Other by the Candidate who doesn’t even know his name. All of this happens on TV with his friends watching, but they just change the channel and get back to playing pool.

9/10 – Kill All Others is a chillingly effective story about the dangers of technology, consumerism, and what happens when we surrender our freedom just because the cheese woman is pretty. All in all, the rest of Electric Dreams first season could stand to be as weird as the finale. Except The Commuter, which was perfect.