Thirty-five years ago Ridley Scott adapted “Do Androids Dream of Electric Sheep” (a short novel by Philip K. Dick) into a sci-fi, neo-noir film, Blade Runner. The movie was not an instant success when it first released, but over time (and thanks to a few new edits), it’s developed a true cult-hit status and is now regarded as one of the finest science-fiction films of its era. The story centered around a cop—Deckard—in charge of hunting down human look-alike androids (called replicants) who went rogue and turned murderous. The moody and almost-dreamlike presentation gave the film an other-worldly feel, one that no other sci-fi movie was able to match (and few risked even trying).

The story told in the original film was relatively open and shut, and in fact the biggest and most lasting impression of it is easily the “is he/isn’t he” question of whether Deckard himself is a replicant. The movie’s script as well as Scott’s direction and editing carefully present enough clues on both sides of the argument to make it impossible to know for sure, but also to make believers (one way or another) certain of their beliefs. Debating the humanity (or lack thereof) of Deckard is one of the reasons the movie developed such an after-the-fact popularity. It was long presumed that doing a sequel would be a terrible idea; it would likely ruin the mystery and would risk tainting a movie that finally achieved a level of success it deserved.

Yet here we are, nearly a generation later, and a sequel has arrived. Amazingly, Denis Villeneuve’s Blade Runner 2049 manages not only to preserve the first film’s central mystery, but it also reaches (at least) the same zenith of the original. If you’re one of those who loved the first and assumed that 2049 was just another in a long line of cliched Hollywood remakes, reboots and sequels, fear not: Blade Runner 2049 is a true sequel, but it is so much more. Here are ten reasons why the film more than lives up to the legacy of the first… 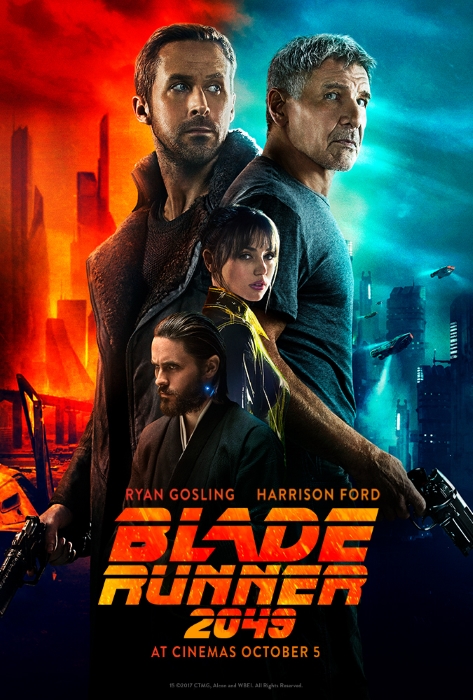 Too many of Hollywood’s recent remakes and “reboot/sequels” have gone overboard trying to make you remember all that you love about the original movie, while failing to add anything worthwhile to the equation. The cheapness, the pandering and the heavy-handedness sucks the life out of those movies. 2049 does an amazing job conjuring up the feelings of the original movie without ever sliding into being derivative. Considering how the feel of the first movie is a huge part of its appeal, that’s no small feat. A lesser director would have gone for endless call-backs, in dialogue and in scenery, but 2049 is almost completely new, yet it feels like Blade Runner.

Along the same lines is the atmosphere of the movie. The original movie had a “surreal,” almost dreamlike mood, especially in the director’s cut which excised the unnecessary (and studio-mandated) voiceover. There were long takes of only characters moving through the scene, with only the soundtrack by the enigmatic Vangelis accompanying the visuals. At times it was like watching the most expensive student art film ever made. It made you question how much of it you were supposed to take literally and how much was just artistic flair. The original balanced it perfectly; no movie has since…until this one. 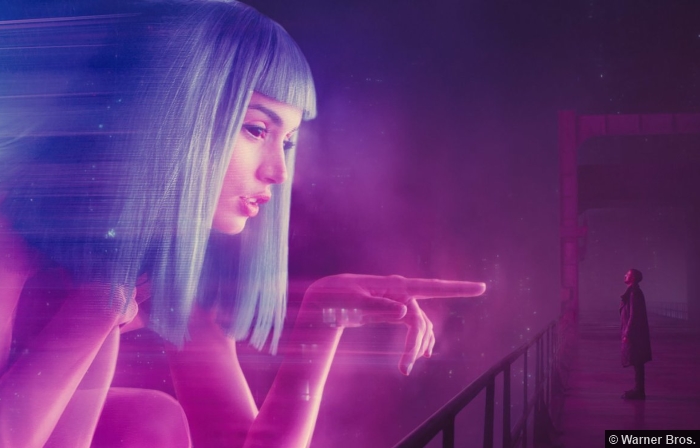 The 1982 movie is still talked about today as one of the last great “matte painting” movies. There was more used than just mattes, however: Every non-computer-enhanced trick in the book was employed to bring the futuristic world of Blade Runner to life.  The sequel comes about in a time when too many directors believe they need to throw more and more spectacle at the screen or risk the audience getting bored. That’s created an era where most blockbuster movies are “all butter no popcorn;” they’re all style no substance. Story is forgotten and the special effects drive the plot. 2049 certainly uses the latest in digital technology to bring its world to life, but it does so as background material. The visuals are all window-dressing to the meat of the story. Even when special effects are employed in minutes-long sequences (such as a scene where a hologram overlaps a flesh-and-blood person and the two constantly shift back and forth), the point is not to be showy; it adds to the story.

And speaking of ADD-addled moviegoers: Anyone expecting a 90 minute action/mystery set in the future needs to look elsewhere. This movie takes its sweet time. The first hour of the movie slowly establishes the characters and the plot. The second throws a hundred tiny monkey wrenches into the machine and sits back to let the characters read and react to it all. The final half-hour or so pays off the hard work that went into the first two hours, with a finale that is rewarding not because of its action and not in spite of its action but simply in tandem to its action. This is a plot-first film; so-called “set pieces” are there only to service the story, as it should be.

A THROWBACK SCORE FROM THE FUTURE

Vangelis’ original work is only barely present here, but the new score by Hans Zimmer is tremendous. It’s heavy on the synth, and like the story, is contemplative and deliberate. It feels simultaneously retro (good for a sequel from an 80’s movie) and futuristic (good for a movie set in the distant future). It’s also deafeningly loud and often plays over long, slow-tracked, wide angle shots of characters walking. That sounds boring but it’s not. It’s the perfect soundtrack to a movie that feels like watching a dream.

Yes, Harrison Ford is in the movie. He’s in all the advertising, all the posters and commercials. Of course he’s in it; he’s doing one last hurrah with all of his big 80’s franchises. I expect to see him sign on to play an aged Jack Ryan any day now. And yet, Harrison Ford is not the focus of the movie. He’s an important piece, but the movie doesn’t bend over backwards to keep making Deckard The Most Important Thing. This is Ryan Gosling’s movie. With only one exception (a cameo that I refuse to complain about because it did nothing to diminish the scene or the movie at large), any returning characters from the first movie were used only in ways relevant to the plot. No one was shoe-horned in just to make fans say “oh look it’s _________!” 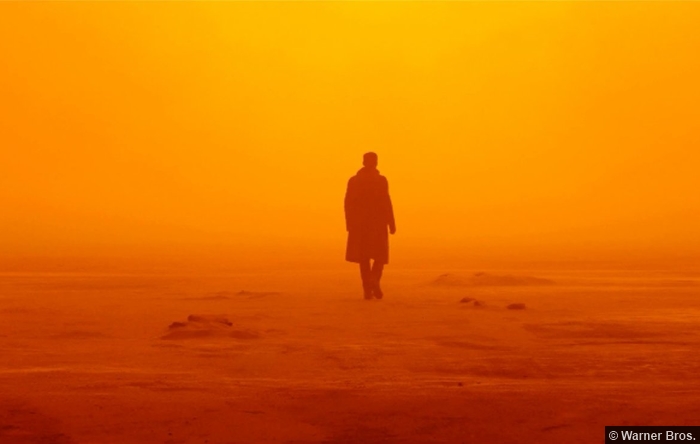 It can’t be said enough how improved the first movie is when you watch the director’s cut. The theatrical release is by no means a failure, but it’s clear that the studio’s decision to add a narration did not help the movie but hindered it. The quieter, more meditative director’s cut is the way to go and 2049 follows the same template. There’s no narration here. There’s no exposition (or at least no more than absolutely necessary). There’s no long, lingering takes on some clue for the audience to notice. As a result, characters will come to realizations and will unravel mysteries at the same time you do…

And speaking of mysteries, 2049 has a great one. While the mystery of the first movie (is Deckard a human or a replicant programmed to think he is) was not plot-driven, the mystery of this movie is the plot. It’s teased in the opening scene, established in the first hour, and then, just when you think you’re clever and have it all figured out, they spin it on its head and make you smile at how duped you were. There’s nothing worse than watching a mystery and figuring it out a good hour before the movie wants you to (eh hem) and there’s nothing better than watching a mystery, thinking you’ve figured it out, only to have the movie totally blindside you.

There is a nod to the “is he/isn’t he” mystery of the original, but it’s more of a subversion than a duplication. The movie begins—and this is no spoiler as it’s in all the release material and promotional write-ups—by telling you almost immediately that our main-character, Agent K (played by Ryan Gosling) is a replicant. By taking that card off the table the movie removes the temptation to try and recapture the Deckard mystery of the first film. There’d be no way to redo that debate without it being contrived, so that’s a smart move by all involved. Where 2049 shines is in what it does next: Once you learn that K is a replicant, the movie begins dropping subtle hints and clues that may make you wonder if its true. It’s a nice subversion to the original, which gave enough clues to make one group certain that Deckard is human, and enough other clues were given to satisfy the other side of the argument.

There’s also a whale of a penultimate scene that’s sure to drive it’s own debate for the next thirty-five years. 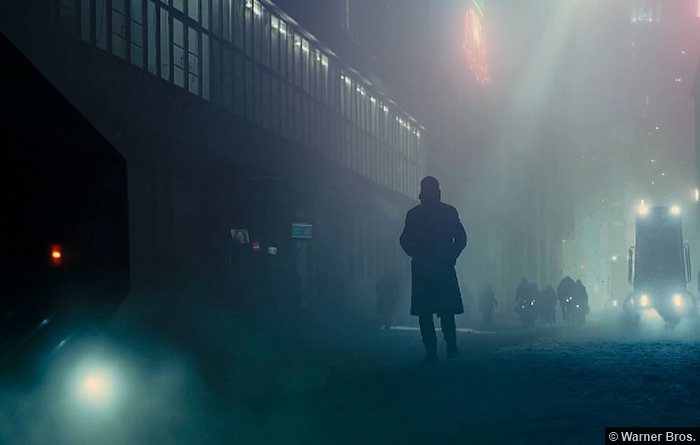 Elvis is my favorite celebrity cameo of 2017. That’s all I’m going to say.

10/10 — Fantastic all the way around. It did exactly what it set out to do and succeeded in spectacularly continuing (concluding?) a franchise that had long been considered “finished.” I can’t find a single flaw.