Electric Dreams S01E05: Real Life – In which an easy answer turns into a hard choice

Five episodes in and it’s becoming easier to see what the recurring themes Electric Dreams wants to explore, and the objectives the show wants to meet. In each episode the lead character begins to question their own reality, and whether a change is possible, or even the better option. In The Hood Maker the Teeps looked to have started a revolution, in Impossible Planet Ed and Irma chose to believe in their own reality (which probably ended in death, at least for their physical bodies), and in Crazy Diamond Ed was left with his entire life destroyed due to his own selfish actions and the ease in which he was manipulated. Only in The Commuter did the lead took back any possibility of changing his reality when he restored his son despite the possibly horrible consequences. Of course, when I say reality I don’t mean that their world wasn’t real, only that their lives functioned as their reality in the strictest sense. It has taken five episodes to finally get to this well-worn science fiction plot, with the Ronald D Moore penned Real Life.

The story is remarkably simple, even if the episode thinks it’s complex. One character is given the choice between two lives: one in which she has everything she wants, but feels survivors guilt after a tragedy on the job, and another in which he has to deal with the grief of losing his wife. Ok, maybe it’s a little complicated, as this character is both future cop Sarah, played by Anna Paquin, and tech billionaire George, played in the present by Terrence Howard. Still with me, ok let’s move on.

We begin the episode from Sarah’s perspective as she and her partner Mario are having one of the worst expository conversations I’ve ever seen. This may seem unfair since no one really talks like a human person on TV, and there isn’t an easier way to set up the fact that Sarah is feeling survivors guilt after a mass shooting that took the lives of some of her colleagues, but c’mon, that’s a clunker within the first two minutes. In fairness, the episode does get better after this as Anna Paquin sells the hell out of Sarah’s conflict. She has the perfect life: she’s a great cop, she has a partner that cares enough about her to put a guy in a coma (that actually might be a bad thing), a beautiful and loving wife Katie (Rachelle Lefevre), but there is still this nagging feeling of being untethered from the people that care about her. Paquin conveys this with an underplayed performance, where every twitch and micro-expression conveys a world of hurt. 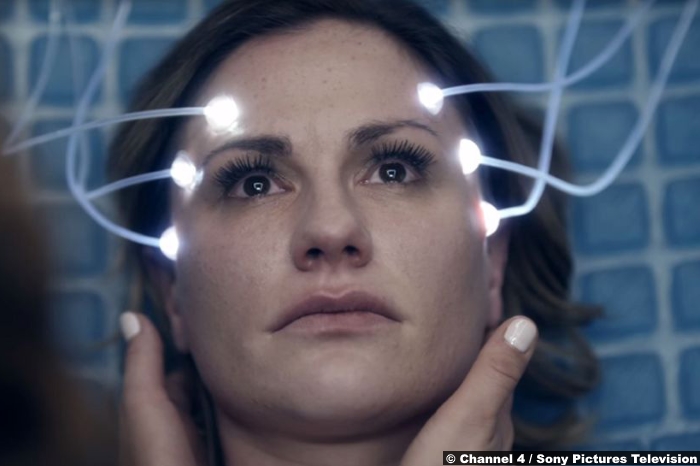 It’s here in which the real science fiction shenanigans comes to the forefront, apart from the flying Blade Runner cars. Sarah’s wife offers her a virtual reality simulation that works as a vacation away from herself, her pain, and her life in general. This is where Real Life plays with our expectations. Sarah doesn’t just get a new life, she is a whole new person: the afore-mentioned tech billionaire played by Terence Howard. From here the episode becomes something of a game of contrasts versus similarities. Like all virtual reality plots this reality, this life seems too real for Sarah to be anyone but George.

Terrence Howard is a strange performer, who is much better suited to weirder roles like his Sheriff in Wayward Pines, to that of the straight role of George. While George is much more in touch with his grief than Sarah, Howards emoting is too jarring compared to Paquin’s under-playing.  George’s company is responsible for the software that creates the vacations, and soon enough the lines blur between which reality is real and which is fantasy. Both realities feature a tragedy that has dramatically altered the user’s minds. Sarah feels survivors guilt over her dead colleagues, and George’s wife, who is also Katie, and the only person to recur in both worlds, was murdered by criminals trying to ransom her for George’s technology. They both have poorly defined partners who aid them in taking down the same criminal enterprise, and they each have a romantic link that has cooled since the tragedy. 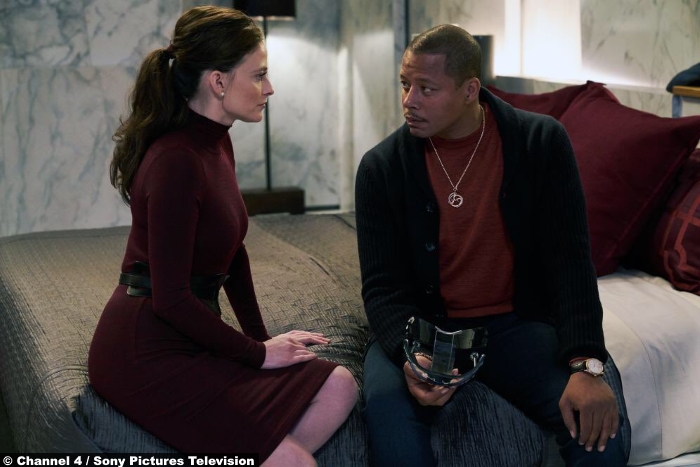 It’s a premise that raises questions that we are all familiar with, and circles back to Electric Dreams strongest theme: escape. What if your life was a dream? What if the dreams you have of being someone else is actually the real world? What are the key components in deciding which world is real? This question is answered by Sarah’s need to feel guilty to punish herself. She makes the choice to be George, to let go of crazy crusades and feel the grief. In that decision she has let go of everything that used to make her happy, including her wife and her job. The real point here is that the choice is right for her. We may see a perfect life, but she sees a male fantasy of science fiction and hot lesbian sex. That’s not an indictment on that world as much as it is an indictment on herself. It’s down to Sarah’s PTSD that her life doesn’t feel right, or real to her. The pain she feels as George, that need to connect, that is what’s real.

6/10 – An affecting episode is let down by a need to over-explain itself, especially at the end. The ambiguity at the end of each previous episode was a strength, and choosing to reveal which world was real was a mistake. It doesn’t matter which world is real, it’s the choice between them that matters.