The great thing about binge-watching is that it lets you plow unremittingly through new shows, never pausing to think about the time you’re throwing away on this, a mere depiction of real life, when the sun is shining and your future husband/wife/both might be out there just waiting to bump into you. But damn it all if all my usual reasons to get out of bed and turn off Netflix for an afternoon just weren’t working with me this weekend, as Daredevil finally got it’s release. I think it’s time we take a look at what Netflix’ latest outing has to offer. 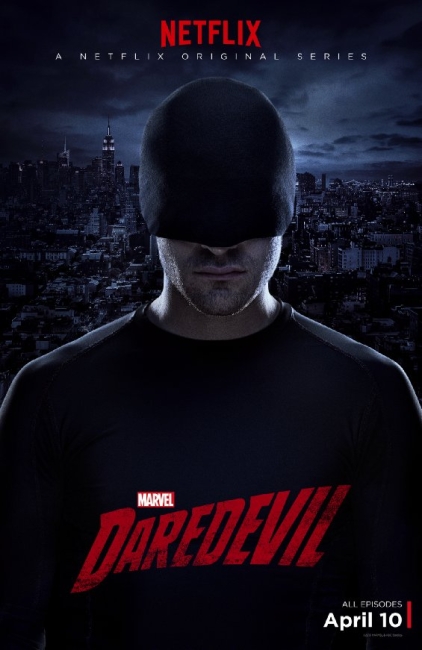 The first of four Marvel series being released on Netflix (AKA Jessica Jones will premiere sometime later this year, while the Luke Cage and Iron Fist shows are yet to begin shooting), Daredevil marks a real step up in terms of the Marvel televisual universe. Sure, there was always plenty going on in Marvel television land, between Agent Carter and Agents of S.H.I.E.L.D (the less said about the latter the better, but still), but now Marvel are using four intertwining series to build towards an ambitious crossover in The Defenders series, which will presumably get it’s release once all four superheroes have had their own chance to shine (a quick hurrah for the first female-fronted superhero show, too- and no, Peggy Carter doesn’t count, with nary a superpower in sight, no matter how awesome she is).

So with all that weighing down on it’s head, Daredevil had a lot to live up to. If it was a flop, would anyone other coming back for the remaining three series? And, as the most recognisable of all the Defenders’ superheroes, would they manage to do Daredevil justice (if you’ll excuse the pun)? After powering through the whole season in a couple of days, I think I still need a little time for it all to sink in- but I’ll go with an overarching yes to both of those questions. 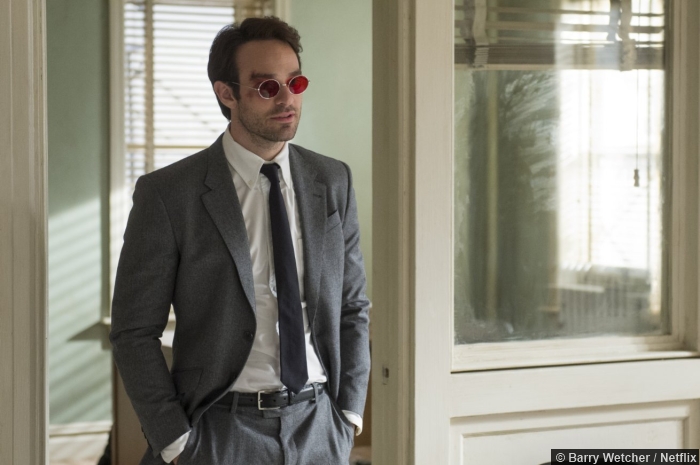 I think the biggest boon for the series was the casting of Charlie Cox. If I’ve said it once, I’ve said it a million times: if you’re playing a superhero, you need to be able to play both the alter ego and the regular guy sides of that hero. Take someone like Christian Bale, who’s a perfect Bruce Wayne but not an entirely convincing Batman, or Henry Cavill, who certainly looks the part of Superman but seriously, seriously cannot seem to play a normal human. Charlie Cox was handed one of the most interesting roles in the comic book universe when he was cast as Matt Murdock/Daredevil, because he’s not a genetically engineered supersoldier or a billionaire playboy with too much time on his hands- he’s just a guy (which slightly heightened senses, naturally) with a powerful sense of right and wrong and the means to express it. Matt Murdock by day is a regular, if supernaturally charming, blind guy just trying to get his law firm off the ground, and by night he’s a barely-masked (seriously, is anyone ever even remotely convinced by those masks? “Who was that masked man?!” “Matt Murdock. It only covered half his face. I’m certain, it was definitely him”) vigilante. and Cox pulls off both with latent gusto,  with a voice you could listen to all day and an easy, charismatic presence that sets him apart from other generic heroes. I’d be genuinely curious to know whether or not the casting department considered casting someone who was actually blind for the role, but in the absence of that, Charlie Cox does an excellent job. 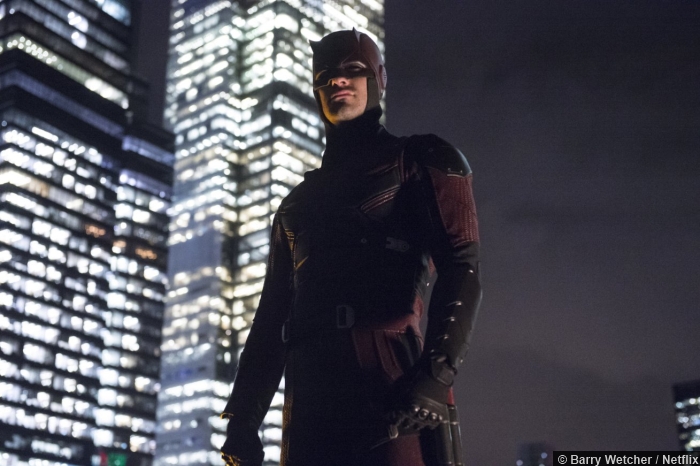 The supporting cast is also a delight, with Elden Henson (who looks distractingly like a young Toby Jones) providing just the right level of quirky sidekickery without overstaying his welcome, and Deborah Ann Woll getting more to do than just get saved by Daredevilat every juncture. My personal favourite Rosario Dawson puts in a great turn as the down-to-earth nurse who covers for Daredevil, and Vincent D’Onfrio is typically fantastic as Wilson Fisk, the big bad of the show so far. It’s good casting matched with a smart and whip-sharp script that keeps the show bounding along even when it’s not following Charlie Cox, um, bounding along. 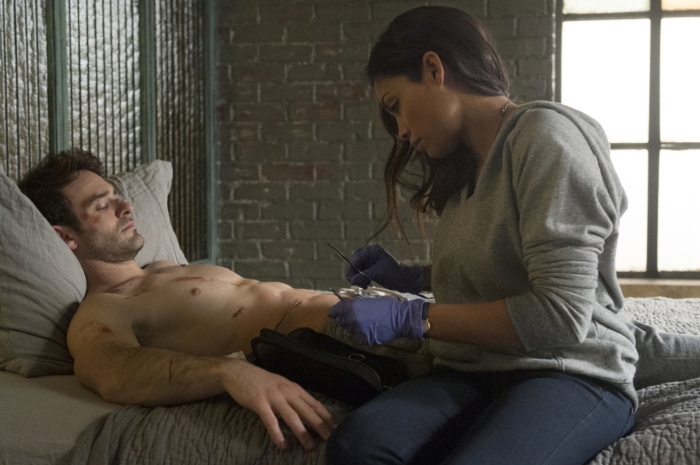 And speaking of Charlie Cox and his bounding, can we talk about the fight scenes for a minute? They’re maybe the only part of the series that didn’t completely convince me, and it took a while to put my finger on why. There’s no doubt that they’re impeccably choreographed, blisteringly well performed, and as fast-paced as you’d expect. But my problem comes from them being so well put-together- with the gritty backdrop of Hell’s Kitchen and the slighlty more realistic edge to Daredevil, the fight sequences feel a bit too pre-prepared and sterile to come across as something that Matt Murdock and whichever Hell’s Kitchen mongrel he’s coming up against would actually engage in. 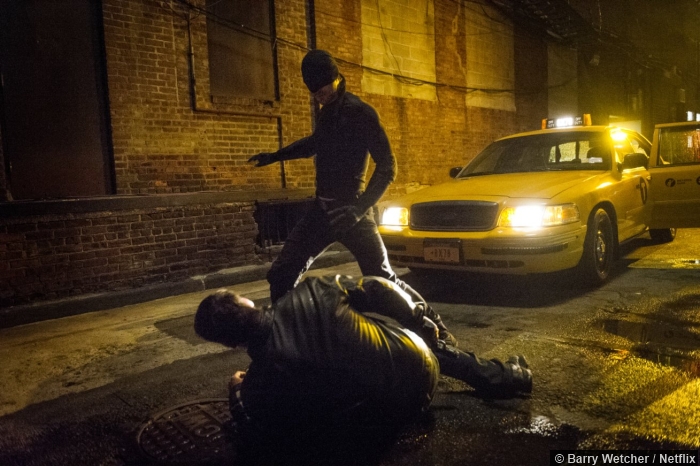 With that aside, though (and I appreciate that it is a very personal grump indeed, and something I’ve already debated passionately with other fans of the show), Daredevil is probably one of the most successful comic book adaptations I’ve seen in a while, capturing (from what little of the comic I’ve read) the very dark little bits of humour and slightly harder edge that the Daredevil comics have compared to more idealistic superhero works. Netflix were definitely right to open their five-series line-up with this as, not only is it the most well-known of all the comics they’ll be adapting, it’s also instantly engaging. Whether or not they’ll hold on to the tone of Daredevil or create four very distinct series is yet to be seen, but this is a seriously assured start, proof that superheroes on television can be just as engaging and entertaining as their cinematic counterparts.

So, what did you make of the Daredevil series? Are you looking forward to AKA Jessica Jones? And what do you think the Defenders TV series will be like? Let me know in the comments below.