REVIEW: Dr. Strange in the Multiverse of Madness is Sam Raimi’s Sam Ramiest movie in ages!

There will be spoilers.

I’m not sure I know where to begin. I can try to analyze the movie as a film, detached from the larger universe it inhabits, but that seems like an unfair way to view the movie. I’m sure many critics are doing just that and, as a result, will probably come down a bit unfavorably on the whole film. After all, it doesn’t even try to catch you up on what happened in past movies and Disney+ shows. But of course, we’re talking about fourteen years and over sixty hours of film and TV content, some of which were the biggest and most cultural-zeitgeist-affecting “things” of its year. To expect any MCU project at this point to devote more time to trying to “catch up” new viewers is laughable. If you don’t know Dr. Strange, if you don’t know Wanda Maximoff, if you don’t know what the word “multiverse” means, that’s on you. The MCU is no longer a film series. It is a long-running soap opera (only with 1000x the budget). You don’t jump into Days of Our Lives and demand: “Stop and tell me who all these people are!” 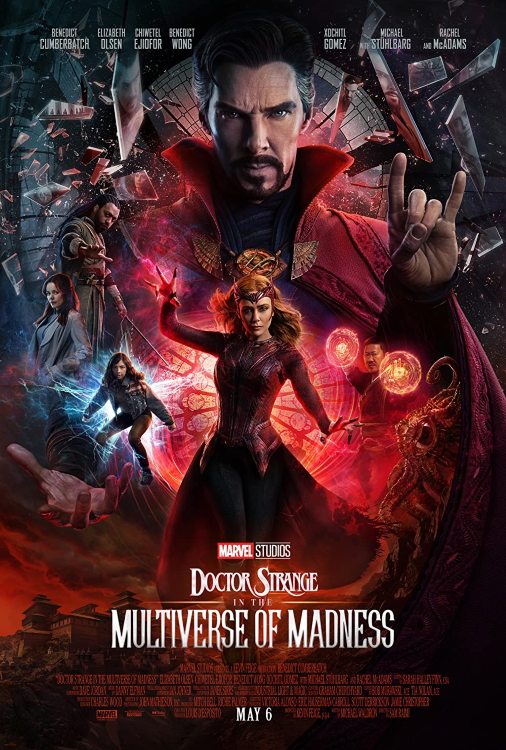 So I will not be reviewing Dr. Strange in the Multiverse of Madness purely as a movie. If I were I would be inclined to criticize the very thin plot that kept the disparate scenes stitched together. There are a lot of things happening in this short and briskly paced movie, and there are three clearly defined acts, each with a clearly defined beginning, middle, and end, but the hero in the center of the story does more reacting than acting. In film, that’s a classic no-no. Good thing this isn’t just a film; it’s episode 34 or so in the MCU soap opera. I’m caught up. I don’t need Scorsese-style filmcraft. I’m here for the spectacle. Does Dr. Strange deliver? 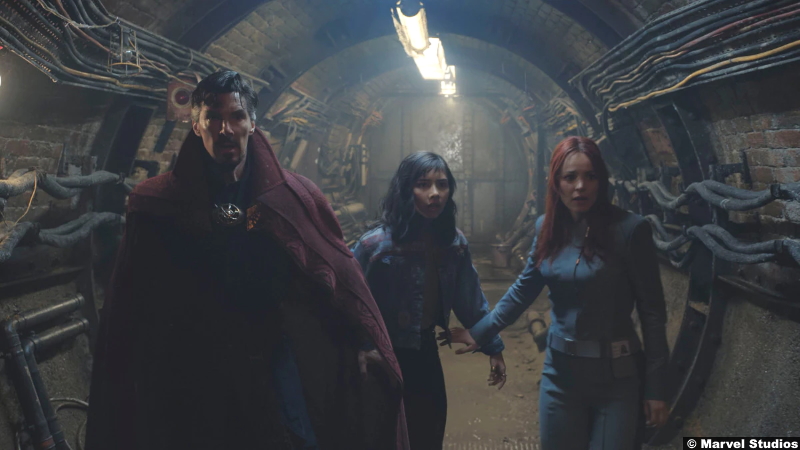 The character first appeared on screen in a 2016 solo film. It was good, albeit a bit paint-by-numbers as an origin story. He didn’t really come into his own until his second appearance, in the Avenger’s mega-movie, Infinity War. That was the film that made me, and most everyone else, giddy with anticipation for his sequel. At first, horror-specialist Scott Derrickson (who helmed the first) was given the chair for the follow-up, but he walked away after creative differences with MCU head honcho Kevin Feige proved irreconcilable. His replacement was none other than Sam Raimi, one of my all-time favorite directors and one of the few filmmakers working today with a style all his own.

Raimi is no stranger to Marvel movies, as he helmed the original Spider-Man trilogy starring Tobey Maguire. Before that he was (and remains) an icon of horror movie cinema, being the creator of the gritty and delightful Evil Dead, the wilder and wackier (and superior) Evil Dead 2, the even zanier and more ballsy Army of Darkness (Evil Dead 3 by another name), and the criminally underrated Dark Man (a comic book movie without the comic book). While Raimi has been busy in recent years on the Ash vs Evil Dead TV series, it surprised me to learn he hasn’t directed a movie since 2013’s subpar Oz the Great and Powerful. That movie had only a few hints of his old self; the rest felt tired and too formulaic. I was afraid the magic of the director I’ve loved for so long was gone, and even when he was announced as the Dr. Strange director, I was worried he would be just a director-for-hire.

What a pleasant surprise it was, then, to discover this is the most Sami Rami-like movie the director has made since Army of Darkness. There are weird camera whips, first-person shots, bonkers death scenes, and genuine horror moments peppered throughout this movie and I loved every second of it. I think back to the Spider-Man movies and can point out moments here and there where the director’s old sensibilities shined through: Green Goblin murdering the Oscorp Board Room and everyone’s skeletons turning to dust was one moment. Doc Ock’s arms killing all the surgeons was another. Those stand out because those are just about the only ones that felt like “the old Sam Raimi.”

This movie is all Sam Raimi. 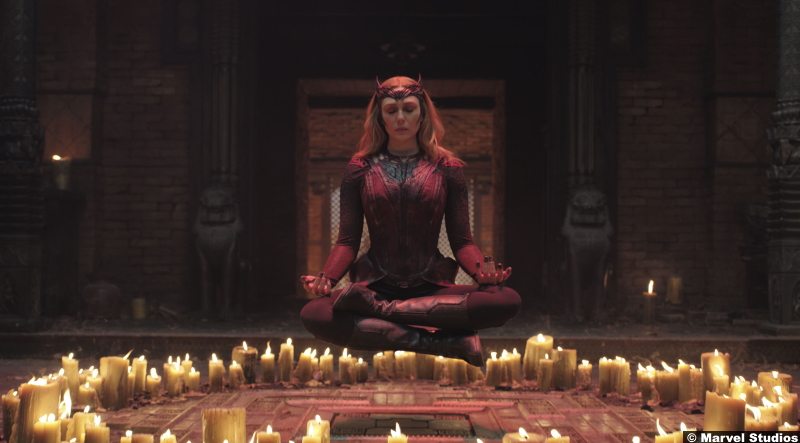 The villain of the picture is easily the best baddie in any MCU movie other than Thanos himself. There is no close third place. Wanda Maximoff owns this movie. If anything, she’s the true central character and the one with the biggest and clearest arc. She is terrifying, tragic, and awe-inspiring all at once. America Chavez is the new addition to the franchise, even though the way the movie handled her character was odd. She gets a two-minute backstory mid-way through the film but for the rest of the time she just…is. She’s there from moment one and we follow her through the movie, to the point where you can imagine someone who isn’t 100% up to date wondering if she was properly introduced, or even just teased, in a previous series or movie. Nope. This is her introduction. She has a neat, albeit limited, power, and functions as a human McGuffin in the picture, but she’s endlessly charming and functions well in every role the movie gives her to play (damsel in distress, wisecracking sidekick, minor superhero, you name it). Considering her power involves leaping through the multiverse, it’s not a stretch to see her as an integral member of the Avengers (perhaps Young Avengers) in the multiverse-heavy Phase Four going forward.

As for the little fun things, there are too many to name. Dr. Strange visits the Illuminati, Marvel’s super-secret club of galactic movers and shakers, featuring delightfully comic-like appearances by Black Bolt (Anson Mount is having himself a wonderful week), Captain Marvel (as played by Maria Rambeau), Captain Carter (the first Avenger in her universe), Charles Xavier (Patrick Stewart, who hovers onto the scene in his 90’s X-Men cartoon series yellow hovercraft, complete with 90’s X-Men cartoon theme song!!!), and Reed Richards himself (played by fan-favorite casting hopeful John Krasinski). The introductions alone made my head go all woozy.

As a child who grew up with the X-Men cartoon series, and who enjoyed but also was kind of let down by the live-action X-Men films, with their black leather outfits and their “too cool to fully embrace the comics” attitude, I can’t put into words what it was like to see the bald man himself hovering in on his yellow chair, with the theme song playing, and then he touches his head and freaking woom-woom-woom circles start radiating from his head just like in the cartoon: AHHH!

Everything about the Illuminati sequence was perfect, right down to the horrendous ways they all died. I was smiling from ear to ear for every second of it. 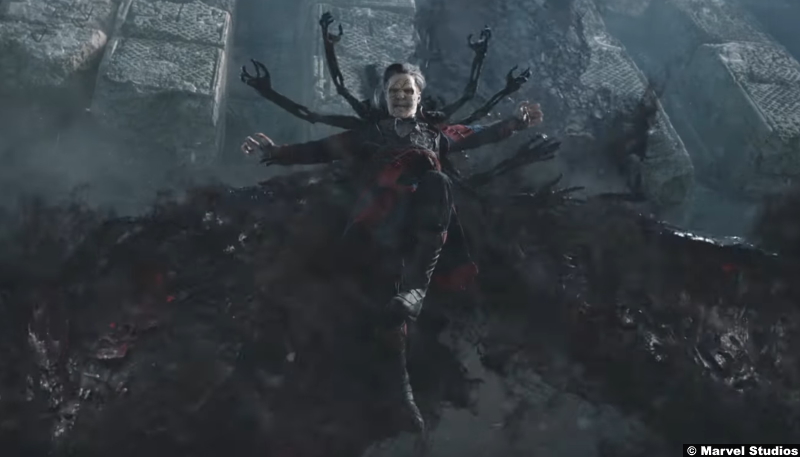 One thing I really liked was the character arc Strange had in the movie.

The reason the Illuminati hate Strange so much is they realized that in universe after universe, he ends up going bad because he has to be in control at all times. As he’s told more than once in the movie, he has to have the knife in his hands (the surgeon has to do it himself). He can’t trust anyone else. The MCU/616 Strange made the call to give Thanos the time stone, arguing that it—his way—was the only way. That idea is challenged by the doctor sitting beside him at the wedding at the beginning of the movie. That sets him in motion to question whether he did make the right call, but that’s the wrong question to ask. He needs to be wondering if he is simply too controlling.

The opening scene of the movie shows the danger in a Strange who doesn’t learn to share the knife: The other Strange decides “the only way/his way” is to drain America’s powers and take them for himself. At the end of the movie, our Strange battles an evil version of himself who uses the Darkhold. Why? Because that Strange decided “the only way/his way” to protect it is to keep it in his possession.

So it’s practically a once-in-the-multiverse sort of occurrence when, at the end of the movie, Strange decides NOT to drain America’s powers, even with Wong telling him “it’s the only way.” Instead, he shares the knife and motivates her to control her power and be a hero alongside him.

And speaking of that climactic fight between our Dr. Strange and his corrupted multiverse version…That was the sequence that I will be watching in 4K at home over and over. It was the Strange vs Thanos fight on Titan from Infinity War that really sold me on the character and the Strange vs Strange fight here really one-upped it. Everything from the blocking to the inventiveness of the magic, to the way the action and the music worked in harmony, blew me away. I mean, I just watched a fight that featured someone playing music on a piano, grabbing musical notes out of the air, converting them to projectiles, and hurling them at their opponent. It was bonkers and I loved every bit of it.

That basically sums up the movie, too.

9/10 – Dr. Strange in the Multiverse of Madness might not have been the cleanest, most finely tuned “film” I’ve seen, but it was bonkers and I loved every bit of it. 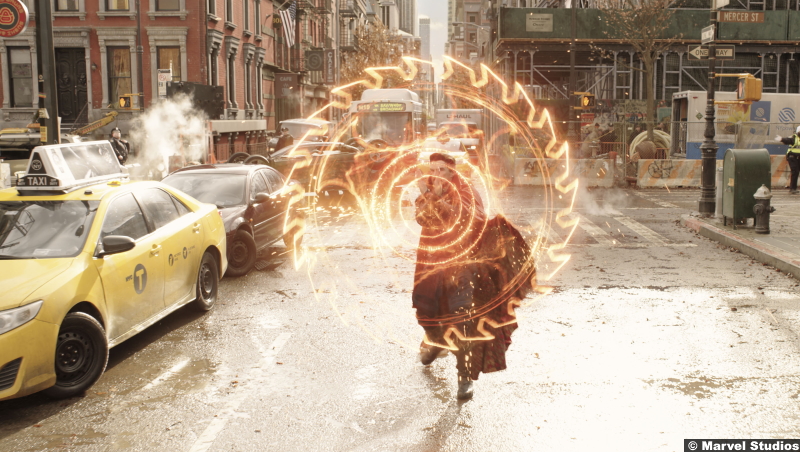