The Mandalorian S01E08 Review: The Redemption – Mando levels up

Episode 1 = 9/10 – The Mandalorian starts strong with a visually-entrancing debut outing. The series is confident, highly produced, with a great lead and a great premise…and there’s even room for improvement.

Episode 2  = 8/10 – The Mandalorian continues to be gorgeous to behold. After eighty-minutes of the story, however, I’m ready for things to start happening.

Episode 3 = 9/10 – The third episode of The Mandalorian is a lot of fun in a short amount of time and, if nothing else, finally launches out into the expanded Star Wars universe and to all the fun that’s sure to be found therein.

Episode 4 = 7/10 – Not a bad episode, but nothing memorable or consequential either, and for a show with only eight (weekly-released) outings, that’s a bit of a disappointment.

Episode 5 = 7/10 – In a vacuum, this is a mostly-fun little short-story sort of episode. There is no vacuum, however; The Mandalorian is an eight-episode special event that feels far too run of the mill in its scripts lately to live up to its potential…or its hype.

Episode 6 = 8/10 – A slight step-up from the past two episodes but the show has stalled.  Hopefully it finds its footing for the final pair of shows, the next of which comes with The Rise of Skywalker hot on its tail.

The Mandalorian S01E07: The Reckoning – The season’s best outing yet

10/10 – The Mandalorian’s penultimate episode this year is the season’s best outing yet.

After episode seven ended, I said this…

Taika Waititi is directing the season finale so you can rest assured it will have great character work and, judging by this week’s outing, a strong conclusion to season one’s arc…and maybe a cliffhanger to boot.

I am blown away.

I make no secret about how disappointed I was in The Rise of Skywalker. For a week I’ve had a hollow feeling in my gut, like I came from a funeral and a part of my childhood died. To end the story of the Skywalkers in such a mediocre-at-best way—retroactively hurting almost every previous saga movie that came before it—really was a gut punch for my fandom. I approached the last episode of Mandalorian’s first season with the least amount of enthusiasm yet.

Thirty seconds into the episode…

The episode, titled The Redemption, wraps up the major story points from the first season while simultaneously building on a few of the last-minute additions to the plot, creating a proper cliffhanger and hook for the next batch of episodes.

The Mandalorian spends as much time this season trying to give baby Yoda away to someone better equipped to care from him as he does just caring for the little tyke himself. As the season ends, he accepts his role as a surrogate father, wrapping up his arc for the year in a satisfying way. 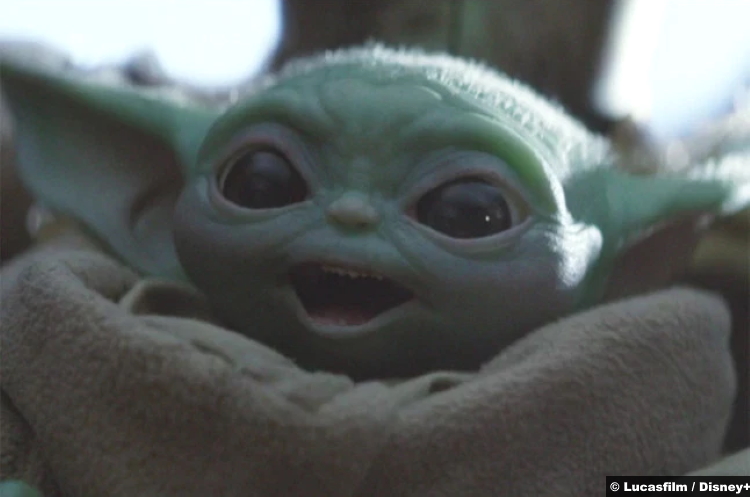 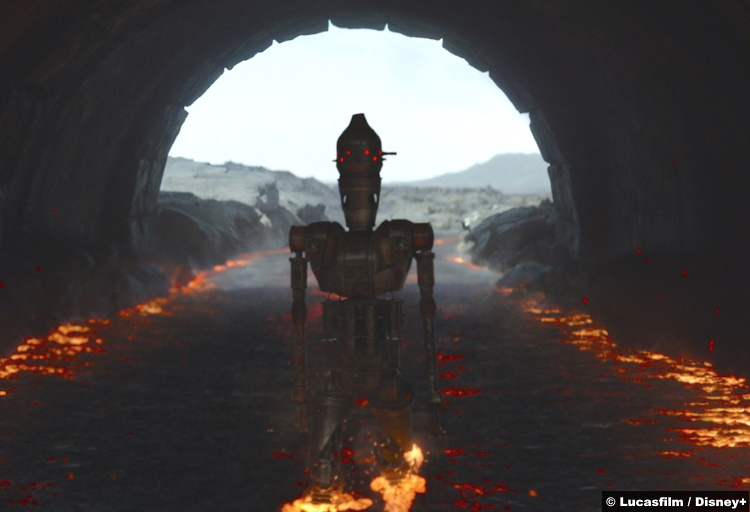 Meanwhile, the IG-11 droid, who begins the season trying to kill the baby, ends it sacrificing himself to protect it (I assume that’s the “redemption” of the episode). And even though we’re dealing with a robot that’s been programmed, the moment still carried dramatic weight, due to the great voice acting by Taika Waititi (who also directed the episode, as if the stellar opening sequence didn’t make it obvious), the sparse but effective dialogue given to the character, and the very cinematic approach to his death. I felt more watching the droid bite the dust than I did any death in TROS (real or headfake).

In between, our heroes pay a visit to the foundry-Mandalorian, who gives out some weapon resupplies, armor upgrades, an appearance customization, and even the next story-mode mission. As much as TROS did the “plot like a video game” trope in all the worst ways, Mando featured another very “video game” sequence that actually helped the story rather than hinder it. 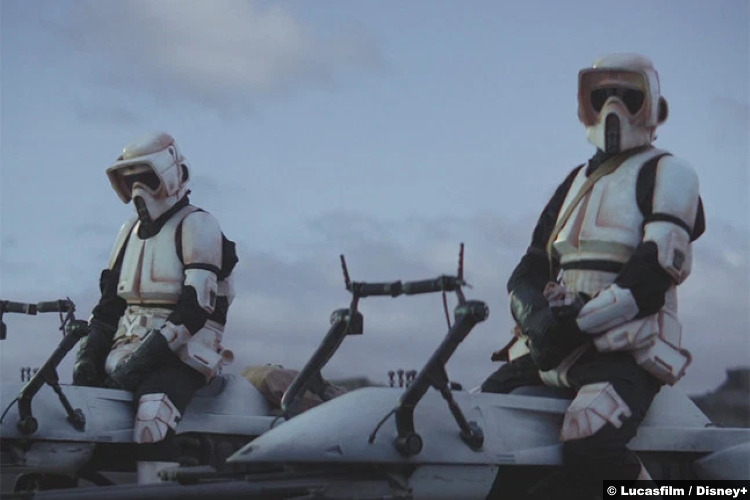 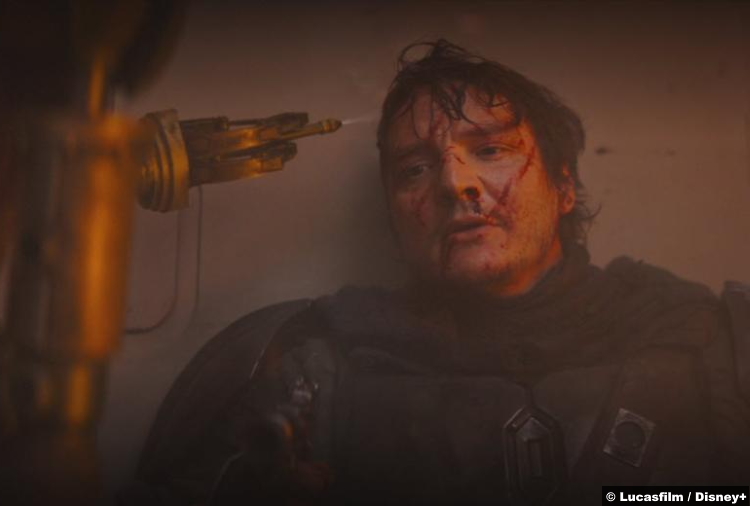 It seems season two is going to be about Mando and Baby Yoda searching for the little guy’s home planet and/or species. Clearly no one (other than the foundry lady) has heard of the Jedi or the force or Order 66, etc. That’s understandable considering the size of the galaxy and this being set in the outer edge of known space. Nevertheless, I don’t see this show turning into a shaggy dog story where, at the end of it, Mando discovers “whoops, all your people are dead!”

So are we finally going to learn who Yoda’s race is? Might we be getting a retcon to turn them into, say, the Whills? We’ll see. And despite the nickname, we don’t even know who “baby Yoda” is. Is he a clone of Yoda? Is he a reincarnation? Is he not related at all? One thing’s for sure, I now await Mando’s season two with the same enthusiasm that I had in the lead-up to The Rise of Skywalker. I also have much more confidence that it will make the wait worth it. 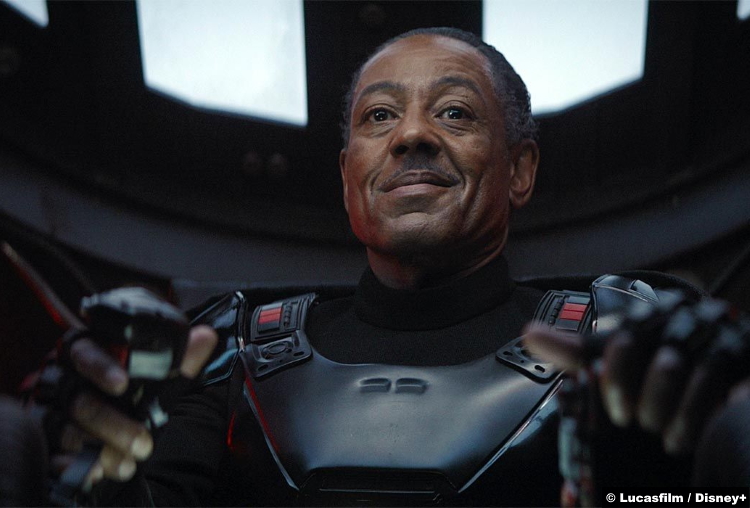 Oh yeah, and there was the freaking Darksaber! Just give me a live-action Sabine, maybe Bo-Katan…shoot, let’s just toss in Ahsoka for good measure. Have them all hunting for the ancient weapon.

10/10 – Funny, thrilling, moving, sharply-written, well-made, FUN; Mando’s final episode of the year is everything Star Wars should be.