To say that Disney’s tenure over the Star Wars universe has been a smooth ride would be…false. Soon after acquiring Lucasfilm, Disney announced the old canon of books, dubbed “the Expanded Universe” would be de-canonized, raising a flurry from among long-time fans of the franchise. The beloved Clone Wars TV series was also cancelled, leaving questions unanswered and fans unfulfilled. Reception to the feature films has also been mixed among hardcore fans, though all but one have been tremendous successes. That one, however, was Solo, an absolute bomb-dud of a Memorial Day release. The disappointment of that single movie seems to have shaken Disney’s confidence in their ability to turn Star Wars into another Marvel franchise, with annual (or possibly multi-annual) releases.

Instead, top man Bob Iger has said that Star Wars will go on a hiatus from the theaters after The Rise of Skywalker drops next month. Personally, I’m a-okay with that as Star Wars has always been, both in story and in production, a generational affair. Fifteen years passed between the first trilogy and the second, and another decade followed the release of the final prequel before the first sequel trilogy film released. Give Star Wars another ten years to reset and then come back with a fresh and frothing fanbase ready to receive it.

New books and comics are released regularly, animated content like Galaxy of Adventures, Rebels, and Resistance has been great, and with Disney+ now streaming, there’s going to be plenty of Star Wars new and old to enjoy on the small screen in between films.

Easily the flagship series of the new streaming service is The Mandalorian, a Star Wars-meets-Western serialized adventure show set five years after Return of the Jedi. The show is the brainchild of Jon Favreau (The Jungle Book, Lion King, Elf, Iron Man; essentially Disney’s go-to guy for big tentpole stuff) and Dave Filini (Clone Wars, Rebels, Resistance; essentially the chief apprentice of George Lucas and the best-qualified candidate to run Lucasfilm when Kathleen Kennedy steps away).

Unlike the shows that Netflix produces, The Mandalorian is not dropping the entire season in one go. There is no binge-watching here; instead, we get a single episode per week, like this is the stone age or something.

Episode One is ready for watching. Is it worth signing-up for Disney+? If you’re a Star Wars fan only, does the new show single-handedly justify the paltry seven-dollar a month price tag Disney has put on their new venture? 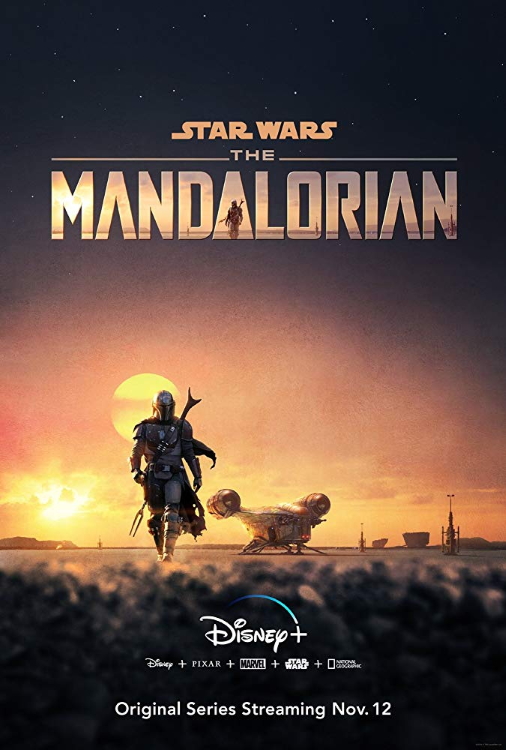 Let’s break down the episode, and rate it according to various categories…

Production– A+. If you didn’t know, you’d think this was a feature-film. It is stylish, rich, and beautifully shot, with great visuals, a lived-in world, and a cool grey-and-gold heavy color palate. Disney spared no expense and it shows.

Acting and Directing– A+. There’s not a weak performance among the lot. The tone of the episode is gritty and serious but never to the point of melodrama and unintended corniness. Dave Filoni directed episode one and did a great job getting these performances out of everyone, many of whom are old-pros. This was Filoni’s first live-action production to direct and he knocked it out of the park.

Pedro Pascal – A. The star of the show didn’t have much to do, script-wise, but he commanded the screen with his presence. Even without removing his helmet and with very few lines spoken, Pascal’s Mandalorian was captivating. 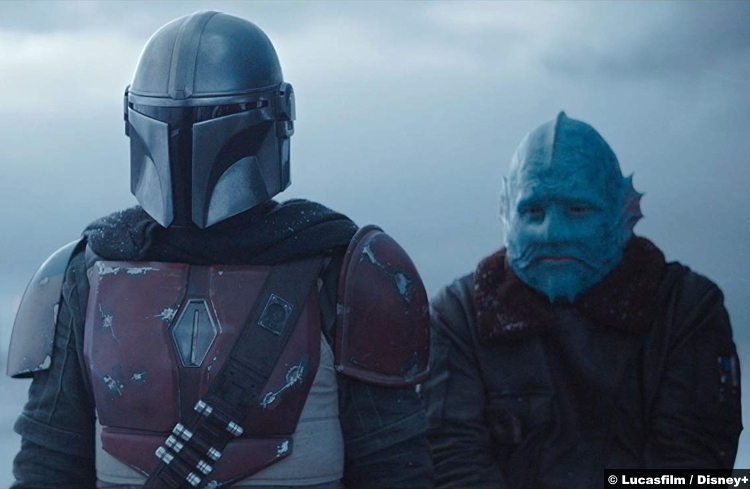 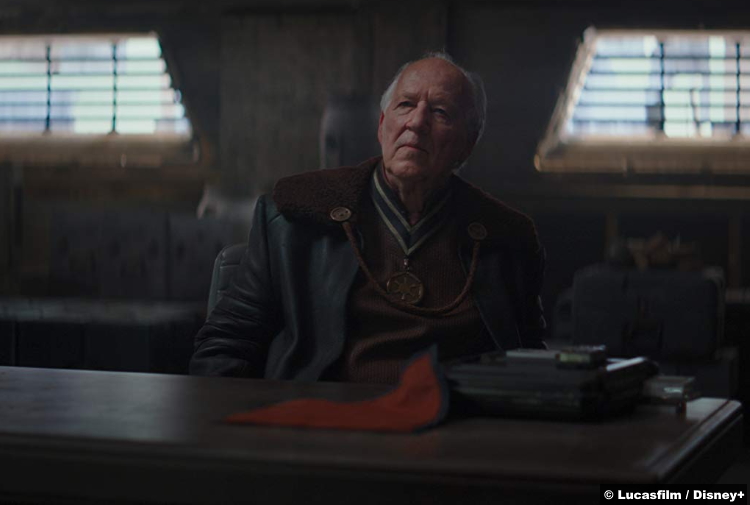 Side Characters– A+. There were several small roles that popped in for a scene or two and then disappeared, all of which were memorable in their own way. Some were comedic, some mysterious. Everyone had a backstory that wasn’t given but was felt. The standout for me was the one-scene performance by the great Werner Herzog. He plays a bygone Imperial who recruits the bounty hunter for his big job. There’s so much unsaid about his character but you can read between the lines to understand who he is, or better put, who he was. This is a guy who, five years ago (when the Empire was still the Galaxy’s dominant force) was a great military figure, no doubt ruling over whole star systems, with a fleet of Star Destroyers at his command. Fast forward to the present, and he’s operating out of a dimly-lit shack, with only a few loyal stormtroopers left to him. He’s like an ex-Schutzstaffel, trying to hold onto Third Reich glory, hawking Nazi gold with none of the power or command that he once had, but since he doesn’t know any other way, he still talks like he’s in charge when it’s very clear he’s a man out of power and out of time. He was the only actor/character in the episode to completely steal the spotlight from the lead and I hope we see him again.

Story– B+. It’s still early but I loved the world-building in the debut episode. That’s all the episode offered, though, great though it was. When you look back on it, you realize how deliberately paced the episode moved, while doing very little, storyline-wise. You could have told the story of episode 1 in 15 minutes but I’m not complaining because the world-building was so well done, the tone was so intriguing, and the visuals were so perfect I was enjoying just looking at the episode too much to care how little was actually being accomplished.

Easter Eggs– A+. As predicted, there were too many to spot in one sitting. Foreground, background, overt and subtle, the show’s first outing was a treasure-trove of canon references. I don’t expect that to change as the series progresses. They don’t do much for the show on a fundamental level but they help tickle the nostalgia bone that Star Wars has always buttered its bread on. 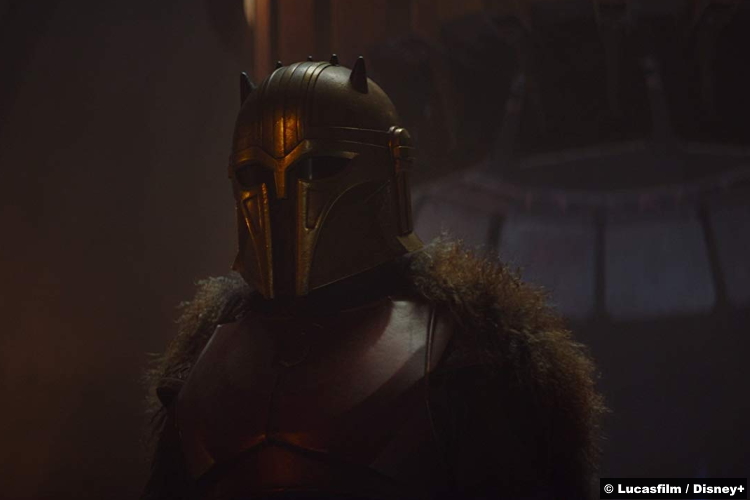 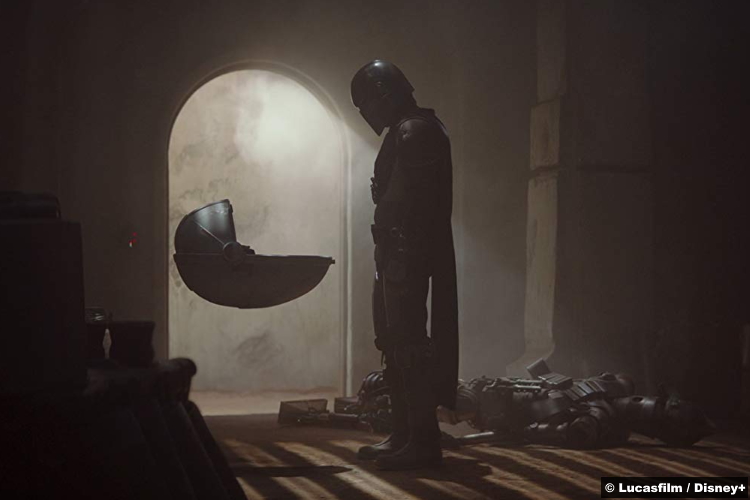 Ending hook– B+. These sort of serialized shows—even without the ability to binge-watch—are known for having a twist of some kind that makes you want to hurry up and watch “just one more.” Everyone in the fandom is rightly going crazy about the baby Yoda-like alien (species name pending) but apart from it being a fun pull from Star Wars lore there’s nothing to it…yet. Something may come of it that makes the character important vis-à-vis his species, but that’s TBD. As of now, it’s just a nice wink at canon and no more.