REVIEW: Daredevil season 3 is the show’s best yet

It’s been a roller-coaster ride for fans of Marvel’s Netflix universe. Netflix has cancelled Iron Fist season 3, but there wasn’t much complaining. The first season was…baaaad. The second was better but only better than season one. Then Netflix cancelled Luke Cage’s third season soon after. That move came just a few months after the release of season two. Cage’s first outing was hit and miss (mostly hit for the first half and miss for the second). Its second, like with Iron Fist, smoothed things out and it was mostly good from beginning to end. It wasn’t anything special but it was fine. Still, to cancel it so abruptly has me a little nervous.

There’s no word yet on the fates of Jessica Jones (great first season, good second season) or Punisher (really good first season).  And there’s always a chance that Cage and Iron Fist can team up as Heroes for Hire on Disney’s upcoming streaming service.

But then there’s Daredevil.

The Man Without Fear was Netflix’ first Marvel series and it’s been the most successful as well as most consistent. There were some gripes about season two, but the criticisms were drowned out by the incredible guest-starring role of The Punisher. Fans were eagerly awaiting DD’s next thirteen episode drop (more than any other Marvel show on Netflix, which might be part of the problem with those cancelled ones), and finally, it’s here.

The show’s third season has been out for about a week and after watching it across three sleepless nights I’m here to break down all the little things I loved about it. If you don’t want spoilers stop after the next sentence:

10/10 Daredevil season three is the show’s best year yet, even eclipsing the amazing first year. Must watch for fans. 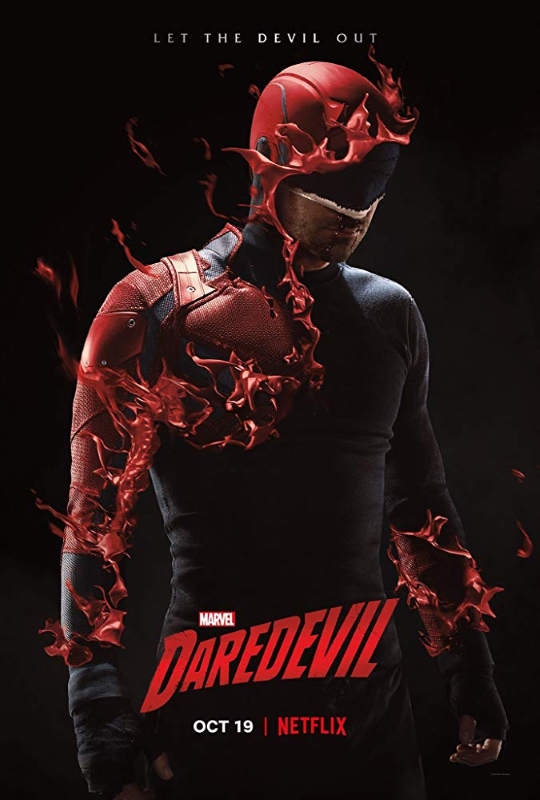 Everyone is on the top of their game here but really the season belongs to three men: Matt Murdoch, Wilson Fisk and Benjamin Poindexter.

A lot is asked of these three men and they more than deliver. But it’s the fact that they deliver so wonderfully, despite being expected to convey a wide range of emotions through very little facial expression that makes their performances so remarkable:

D’Onofrino’s Kingpin rarely loses his cool; he’s usually so absolutely in command that he has no need to. Even when you think he’s finally been “gotten,” the shots of him calm and under control hint at just how tight-a-hold he has on the city. Because of that, the gravelly voiced crime boss mostly stands still, barely moves his lips, and rarely speaks above a whisper. And yet, he absolutely captivates. No matter what else is going on, when Fisk is on the screen that’s where your eyes are. He was sorely missed throughout most of season two but it was worth the wait to get him back. 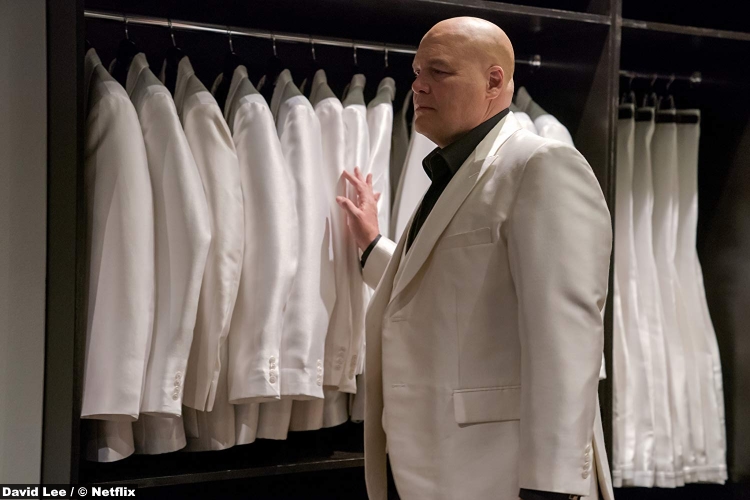 Cox, of course, spends much of the season under a mask that covers half his face. That’s limiting enough as it is, but he has the added handicap of not being able to act with his eyes. Even when the mask is off Cox has to hold the lazy stare of a blind man. And yet, despite that, he pulls you into the role. Were it not for D’Onofrino, Cox would be the star of the show. You’d think that would be obvious but too often these superhero shows tend to explore all the characters except the titular superhero. Not Daredevil; this show understands how much material there is to mine from the blind vigilante and this season puts him through the ringer both physically and emotionally.

Rounding out the top three is the new baddie: Bullseye. He doesn’t wear that title and but for a quick flashback of a baseball cap, he doesn’t sport the infamous logo, but it’s him. Other than Kingpin, Bullseye is Daredevil’s most infamous baddie. Bringing him into the show was a moment most longtime fans of the comics were anticipating and dreading in equal measure. Few comic book villains carry such a reputation of dread. When Bullseye appears you know someone you love is going to die. In the comics, it was Bullseye who did this to Electra, in one of the most famous panels in Marvel history…

So when it was revealed he was coming to season three, most thought Electra—who was introduced last season—was done for. Early on it became clear that Electra was not going to be a player this year, which put all eyes on Karen Page.

But let’s talk about Poindexter (thankfully called “Dex” for most of the season). He’s a psychopath…clinically. Devoid of empathy, violent, unpredictable, there are moments where you worry for Wilson Fisk’s safety when he’s alone with the guy. Once again, the nature of his character means actor Wilson Bethel has to maintain a sort of dead-eye glare. He shows the most emotion of the three, but a lot of it is fake, put-on emotions needed to fool people into thinking he’s a real, normal person. He manages to convey two different people’s personalities in every shot he’s in, both the phony FBI agent and the deranged killer underneath the facade. His arc is equal parts shocking, terrifying, maddening and even heartbreaking.

As for the rest of the stars, there’s an obvious dip in magnetism.

Karen Page and Foggy Nelson have their arcs, say their lines and do their things, but they’ve lost the most appeal since the first season. They were at their best as part of a trio with Matt. With the two of them estranged from their crime-fighting buddy, they’re missing a spark. It’s like Ron and Hermione without Harry around. Karen is given half of an episode to tell her backstory. It’s the weakest link in the season and does nothing to garner extra sympathy for her or develop her character that couldn’t be done without a flashback segment. In fact, one episode later Karen basically retells the pertinent details and it’s a much more effective scene than anything the flashback offered. 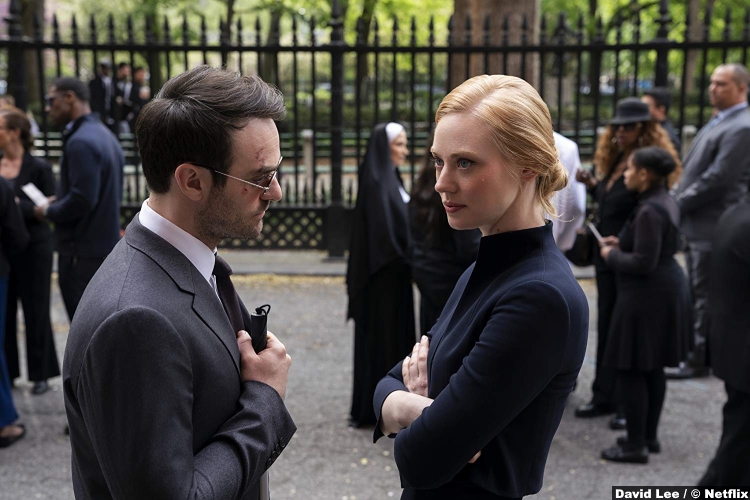 Other than that, I will have only one additional criticism for the rest of this review.

Special Agent Nadeem is the other new character who is given time to develop. His arc is most interesting. His early episodes try your patience, but as his life crumbles around him and you watch him take us behind the scenes of Fisk’s control of the city (specifically the FBI) you slowly become attached to him, to the point where his final scenes are genuinely moving.

Speaking of the show trying your patience; if there’s one other criticism it would be how the first few episodes introduced storylines that seemed primed for season-long exploration, but instead, they last no more than a few hours. Matt loses his heightened senses in the season’s opening, which certainly could have been something worth developing over the course of a dozen episodes. Instead, he chugs a nettipot and poof: all better. Early on we explore Matt’s wavering Catholic faith (one of the key character traits that define him) but after a few episodes, the concept is almost entirely dropped.

On the other hand, Dex is developed perfectly. He starts out as a good enough guy that is hard to picture as a homicidal psychopath before slowly cranking up the heat, episode by episode, until by the end he’s an even bigger threat than Kingpin. 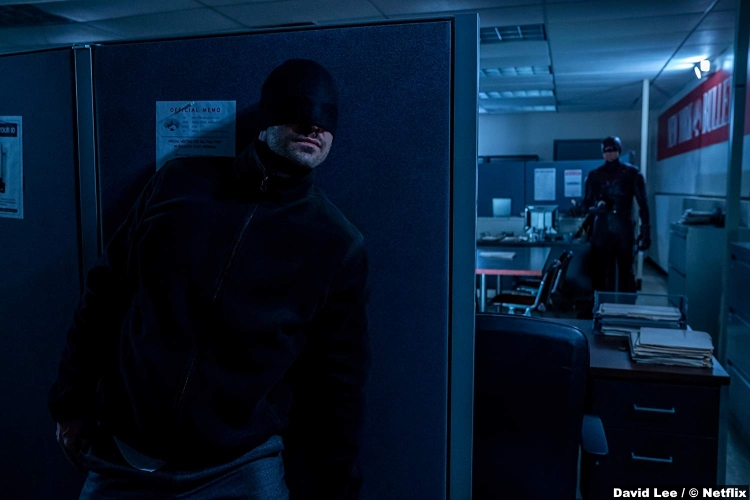 Watching Fisk manipulate Dex, twisting him and honing his psychopathic tendencies, seducing him into his army was everything I ever wanted out of the Palpatine/Anakin relationship in the prequels. It’s exactly what Episode II and III should have been. Of course, everything they did with Fisk this season is excellent. Maybe my favorite line this year was spoken by the FBI asst. director in charge of the Fisk case: “I’m not your boss anymore…Wilson Fisk is.” So chilling.

The best thing a writer can do with a villain is give him power. Making Lex Luther President was brilliant on DC’s part. Fisk didn’t become President because he didn’t need to. He’s like Voldemort, ruling behind the scenes. It’s even more effective that way.

The best shows get better as they go on. You don’t want to say “the show is good but the first season really is the best. Nothing else has topped it.” Daredevil had a fantastic first season and though season two was hit and miss it was still better than just about anything else in the Marvel/Netflix library.

Season three blows it all away. The fights are more intense, the deaths more painful, the twists more shocking and the acting more genuine.

The final showdown at the end of the episode was a fight unlike any I’ve seen on TV before, in any show. You had three characters with different levels of motivation in the fight: Daredevil wanted to kill Fisk and stop Bullseye. Bullseye wanted to kill Fisk and was fine with killing Daredevil to get to him. Fisk wants to kill Daredevil but realizes he will have to kill Bullseye too. It was like a classic Mexican Standoff…except everyone started punching.

By the time the dust cleared and I was catching my breath, the season was over and all I could think was: Please don’t cancel this, Netflix. It’s among the best shows on the platform and a worthy addition to the MCU.