Maniac is the latest Netflix offering with an absolute embarrassment of talent behind it. Starring Jonah Hill and Emma Stone (who have multiple Oscar nominations behind them, with a win for Stone) and created by Patrick Sommerville and True Detective director Cary Joji Fukunaga, Maniac is exactly as strange and divisive as those early trailers suggested. Maniac’s weirdness makes even more sense considering Somerville’s work on HBO’s fabulous The Leftovers, with this show acting almost as if the writer is challenging himself to create an even more complex and emotionally rewarding story as Damon Lindelof did. Unfortunately, Maniac doesn’t quite reach the heights of Somerville’s previous job, indeed not many shows could, but Maniac carves out its own little corner of the TV landscape by approaching the topic of mental health in a creative, and at times frustrating way that demands patience from the viewer in order to unearth its many treasures. 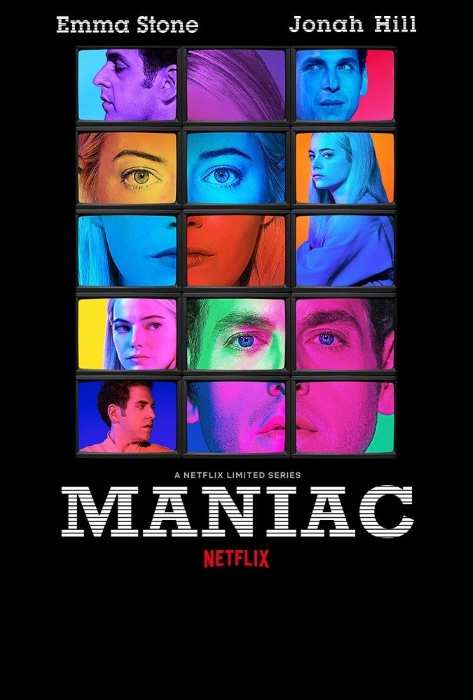 The plot itself is fairly simple. Hill and Stone play a pair of mentally ill outsiders, each with their own specific problems and traumas, who take part in a futuristic version of therapy which combines drugs and a self-aware computer with the goal of curing each subject of their mental disorders. Ok, maybe it isn’t that simple, but this is all just framing device for Maniac’s real intention, to show how creating personalized stories for ourselves give us the tools to better understand how we think and why we are the way we are. For all of Maniac’s quirky sense of style, its aims are satisfyingly ambitious. 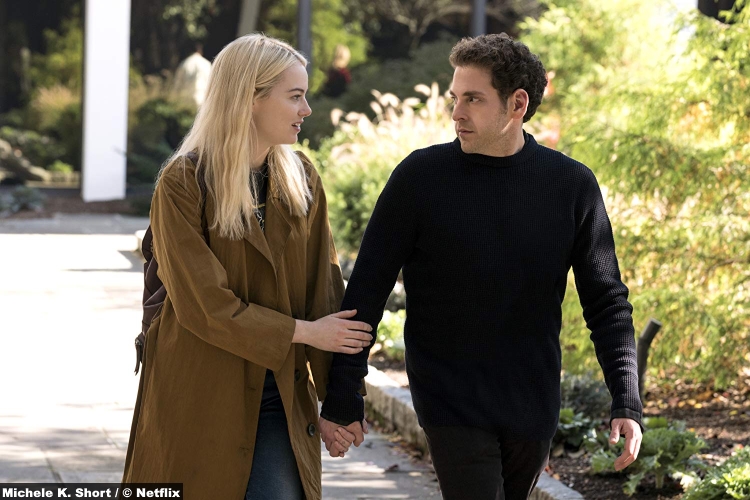 With the tone firmly between comedy and drama, it’s up to Hill and Stone to create characters that we want to join on these different journeys. Hill plays Owen, the black sheep of a wealthy family who suffers from paranoid schizophrenia. His outsider status is played up shrewdly by his continued separation from the rest of his family, led by his father, played by old pro Gabriel Byrne Despite occupying the same space as his father and brothers, all of whom are of the big strapping blonde variety, Owen is usually found on the fringes of the frame. Maniac’s first episode is mostly centered on Owen and the means in which he becomes part of the drug trial. His illness is mostly communicated through the stuttered appearance of Grimsson, a man who looks exactly like his brother Jed, both of which are played by Billy Magnusson, who claims that Owen is actually a sleeper agent who must find his handler in order to save the world. Grimsson is a figment of Owen’s disease, an almost dreamlike version of what he wishes his brother could be for him.

Thanks to her appearance on a bunch of different advertisements, as well as her presence at the beginning of the trial, Owen thinks that his handler is Annie, played by Stone. Annie is at the drug trial for entirely different reasons, mainly because it’s her only means of accessing a drug which allows her to re-experience a past trauma. Of the two leads, it’s Stone that immediately catches the eye, as Annie is a lot less passive than Owen, though Hill gets progressively more compelling as the season moves forward. Annie is less internal than Owen, coming across like a raw nerve whose pain is constantly bubbling to the surface. 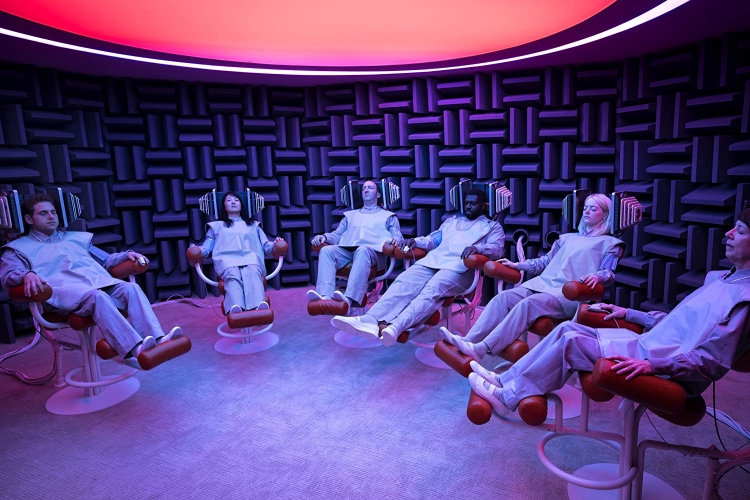 The first two episodes of Maniac are mostly just about getting Owen and Annie into the trial, something that might test some viewers patience but Somerville and Fukunaga use this time to allow Hill and Stone to subtly flesh out Owen and Annie so when the weirdness begins we have a stronger sense of logic to ground proceedings. Patience is the key to Maniac, especially when the characters are thrust into different worlds of their own making.

While the show shares a lot in common with cerebral shows like Legion, Westworld, and Mr. Robot, Maniac shouldn’t be approached as a show that needs solving. While it has the characteristics of something that JJ Abrams usually produces, we learn and experience the show at the same pace as the characters, meaning that there is very little of the narrative focusing on confusing us or wrongfooting us. Looking at Maniac with too analytical an eye is the best way to miss a lot of its charm, with much of the joy of the series coming by just being in these character’s shoes. 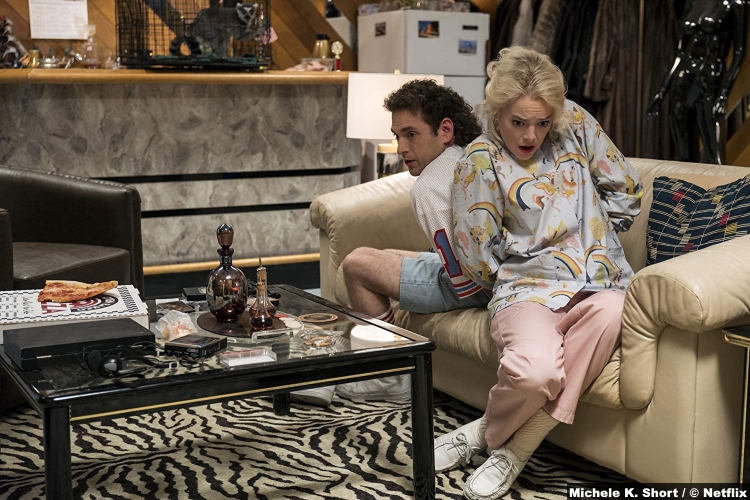 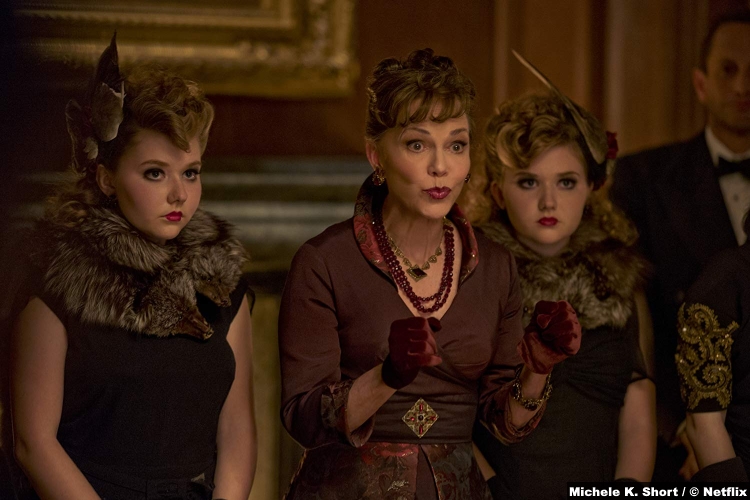 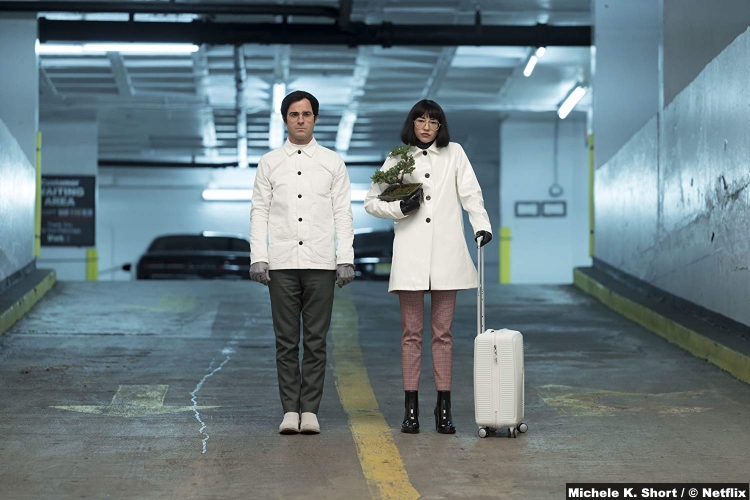 While the lead characters and the writing is excellent, Maniac offers much more than that. The art direction is brilliant, with this distinctive world populated with old-fashioned computers, eccentric wardrobe choices, and legal companies that offer the likes of blackmail, kidnapping, and actual people earning their paychecks by being a friend proxy gives Maniac lots of personality. Then there’s the show’s secret weapon in the form of Dr. James K. Mantleray, played by Justin Theroux, the creator of the trial. Theroux puts in a brilliantly mannered performance as a doctor with deep, deep issues of his own, most of which are to do with his mother, played by the equally wonderful Sally Field.

8/10 – Maniac is bursting with ideas and creativity, with wonderful direction from Fukunaga: who has just been announced as the director of the next James Bond movie. The show demands patience through the first few episodes, but once it hits its stride Maniac puts a beautifully singular spin on the experience of mental illness.