A comparison floating around about DareDevil’s second Netflix outing is “The Dark Knight.” Like the second Chris Nolan Batman film, DareDevil S2 ramps up 2/3 of what worked about the first outing, while doing so at the expense of the other 1/3. In the Dark Knight, the emphasis on Batman and his villains were expanded from Batman Begins, but the great character arc that Bruce Wayne went through in the first movie was largely absent in the second. Instead we had Joker, Two-Face, and other mobsters taking up a lot of screentime, without much room for Bruce Wayne. The same problem exists in DareDevil S2, but like with The Dark Knight, the error is hardly worth being called an “error” because so much of everything else is stellar.

In season one of DareDevil the focus was on three things: Matt Murdock’s Catholic confliction with his nighttime crime fighting excursions, DareDevil’s said excursions, and the rise of Wilson Fisk, a.k.a. The Kingpin. In other words the hero was 2/3 of the story and the show excelled because of it. Now, with season two, we have another great villain (Punisher) that absolutely steals the spotlight, as well as a new anti-hero (Elektra) to occupy the rest of DareDevil’s time, not to mention a seemingly endless supply of ninja zombies to contend with, and even more villains that pop up throughout. All of it adds up to there being a lot on Matt Murdock’s plate, to the detriment of his work as a defense attorney. Even when his ragtag firm ends up working the so-called “trial of the century” he still is so preoccupied with “DareDevil stuff” that he misses making opening statements, misses all of the cross-examination, and only appears for one scene where he puts his star witness on the stand…a moment the distracted and unprepared Matt Murdock totally botches. 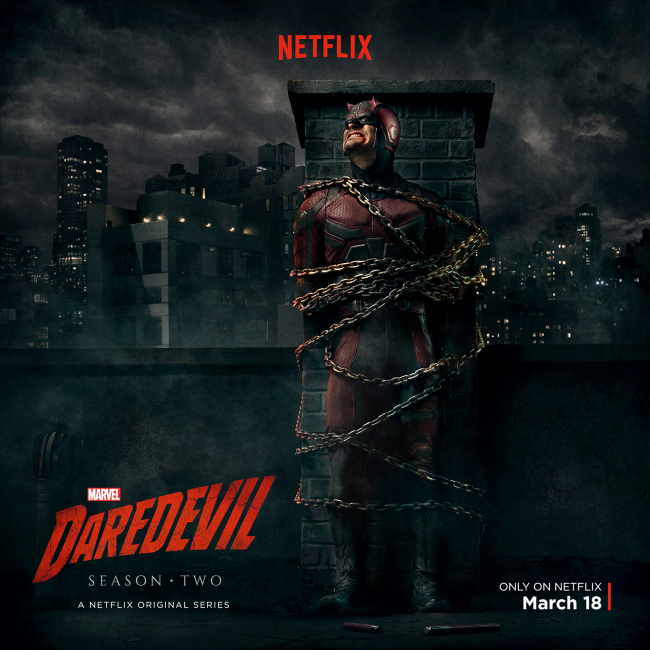 But, though Murdock himself isn’t given a lot to do, his associates, Karen Page and Foggy Nelson are given a greater role in the season. With Murdock/DareDevil busy doing his hero thing, Foggy takes a more assertive role in the law firm, first by having it thrust upon him and later by choice. Foggy, not Matt, gets the real hero’s journey this season. Last year he was a bit too whiny, especially after he learned Murdock’s secret identity, and there’s a little more of that in the early episodes of the second season, but as soon as stuff starts going down, the whining disappears and the new Foggy starts to emerge.

Karen too goes through a lot of transformation. The season starts by highlighting the obvious romantic tension between she and Matt, and the show doesn’t waste much time letting the sparks fly. She of course remains totally in the dark about Murdock being DareDevil, though she suspects the lawyer is hiding something, she just doesn’t know what. As she works with Foggy (again, with Matt increasingly distant from the firm) on the “trial of the century” she shows real skill as a legal aid, to the point where the viewer might begin to suspect where her character is headed. Instead the writers take a bold and different direction with her character. If you were one of those longtime DareDevil fans, like me, that regretted seeing Ben Urich die in season one, Karen Page’s journey in season two might just make you go “hmm” as you consider where she’s headed going into season three.

But the real star of the picture is not Matt or Foggy or Karen or even Elektra (who is a dynamite character, brilliantly portrayed by Élodie Yung, that also gets a great character arc). The real star of season two is Frank Castle and the amazing turn that Jon Bernthal gives to the Marvel legend). Punisher makes his presence known from the very first episode. He’s filmed early on almost like The Terminator, with a ruthless, merciless drive. The real standout, at least before we are allowed to get to know the character, comes when he strikes a devastating attack on a hospital, in an attempt to take out someone he sees as a villain. 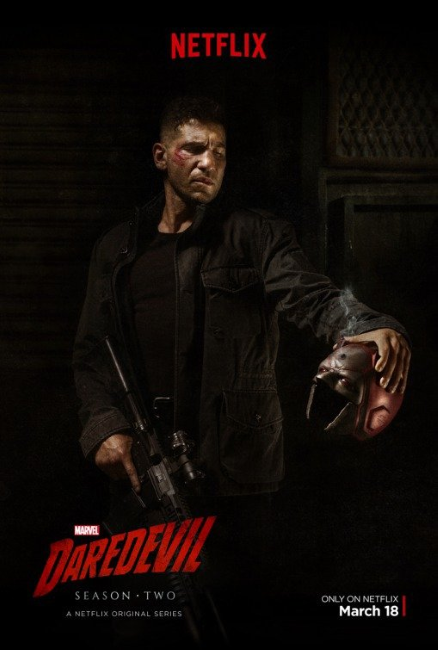 That’s the great drama about Punisher. He sees himself as a hero. Not in the warped and ego-driven way that Kingpin sees himself as the city’s savior, but in a broken, classic-comic book sort of way. Punisher’s origin is fairly straightforward and isn’t too different from its comic’s roots in the Netflix show either. His family is brutally gunned down by “bad guys” so he sets himself on a mission to avenge their deaths and rid the city of criminal scum. That’s the origin of so many superheroes. What sets Punisher apart is his absolute ruthlessness, his lack of moral boundary, and of course, unlike Batman, he definitely lacks a “no kill” policy. He sees himself as someone doing what DareDevil is doing, only without the limitations Murdock puts on himself.

The show allows for some great moments between the characters, but the highlight is a rooftop confrontation/conversation that gives us our first real glimpse into Castle’s insight. Previously, Murdock had rejected the idea that DareDevil was the genesis of someone like Punisher (in another comparison to Dark Knight, where Joker was the result of “escalation” brought about by Batman’s sense of justice), but during their rooftop encounter, Punisher all but confirms it when he says that DareDevil represents a “half-measure” whereas he goes all the way. “All the way” being code for “you let the criminals live; I end them permanently.” Throughout the season, we are given more information about Castle, about what happened to him and about what drives him. And even though he’s a man who, in the course of the season, kills over 40 people “in cold blood,” the writers do such a good job with the character that you can’t help but, if not root for him, then at least understand him. And that’s an incredible achievement.

Again, the central figure of the season—DareDevil and his alter-ego Matt Murdock—is a little lost in the shuffle of so many heroes and villains and heroes turning into villains and back and forth—a fact that becomes a part of the story (which is, itself, good writing)—but it’s still a shame when the star of the show isn’t the star of the show. Murdock isn’t allowed to shine the way Punisher is, but DareDevil gets his moments, and he and Elektra have more than enough chemistry to make up for the lack of many Foggy/Murdock scenes.

9/10 – If you’re a Marvel fan, a DareDevil or Punisher fan, or just a fan of great escapism adventure/drama, I can’t recommend this show enough. The first and second seasons are available on Netflix. Watch them!