Back in the early 90’s Warner Bros. and the dynamic duo of Bruce Timm and Paul Dini revolutionized Batman on the small screen with the groundbreaking Batman: The Animated Series. Long before Chris Nolan gave us the definitive “dark and gritty” take on Superheroics, Batman TAS was bathing its hero in noir-like shadows and a quasi-retro/modern art-deco that, to many fans, realized Gotham City better than ever before or since. TAS ran for five years, and went through a few different iterations and spawned several spinoffs (Superman, Batman Beyond, Justice League) that aired on TV and cable for fifteen years. But it’s the original that remains the gold standard for animated comic book adventures.

When WB was flailing and putting out dreck like Batman & Robin, Timm and Dini were keeping fans satisfied with great animated stories week after week. Later, around the time Nolan resuscitated the Caped Crusader for the big screen, Timm’s animated division switched to direct-to-video animated films. Some were original tales while others were adaptations on classic comic series’. All of them maintained a consistent level of quality, with some rising above the rest to be among the very best DC stories (comics, movie or otherwise).

Some of these animated tales brought back voice actors from the old TV shows. Hearing Tim Daly’s Superman voice, for example (he played the character in all the TV shows and a handful of animated films) was always a treat, but there were always two that fans actively and eagerly anticipated hearing whenever they were announced for a movie: Kevin Conroy’s Batman and Mark Hamil’s Joker. For many, they are the definitive voices to those characters, having played them across various platforms (TV, film, video games) for over twenty years. Only rarely do they step into the roles anymore but when they do it’s always special.

Hamil has been busy with the resurrected Star Wars franchise, and even though he claimed to have retired from playing Joker (apart from a comic con appearance here or there), he always left one little project open to do, just in case: The Killing Joke. 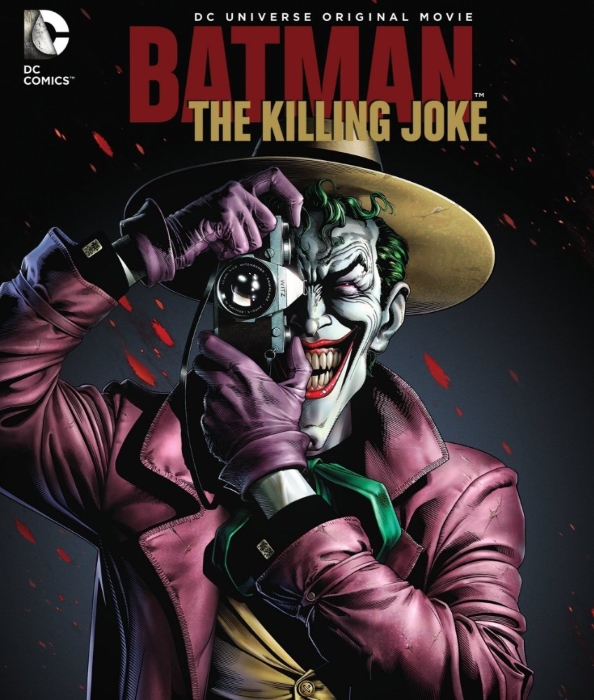 The Killing Joke is arguably the greatest “short story” ever told about Batman, and certainly about Batman and Joker’s relationship. Alan Moore penned and Brian Bolland drew the story as a one-shot (not directly connected to any on-going storyline before or after) in 1988. It was dark and disturbing a full year before Tim Burton officially took Batman out of the BAM/POW era of the 60’s.

Moore envisioned the story as a thesis whose premise was “Batman and Joker are essentially mirror images of each other. Both are men who suffered from one bad day which irrecoverably changed their lives and set them on the path they will forever travel.” The key difference, of course, is that Batman’s one bad day (the frequently-adapted “murder of his parents” origin story) led to a life of crime fighting, whereas Joker’s origin (untold in comics until this story) led only to a life of crime. Batman is driven to the edge of insanity; Joker drove over the edge. They are different but in terms of having “one bad day” and how it affected them, they are the same.

In the story, Joker sets out to prove that “one bad day” can break any man. Thus he breaks out of Arkham Asylum, shoots and paralyzes Barbara Gordon, kidnaps her father, Commissioner Gordon (the guinea pig in Joker’s experiment) and puts him through the ringer, psychologically. Gordon is stripped, abused (physically and mentally) and taken to the limits of a nervous breakdown.

Throughout the story, flashbacks are told that detail the Joker’s “origin.” The book actually goes out of its way to say that this is just one possible origin that is rolling around the Joker’s deranged mind. The fact that his pre-Joker name is “Joe Kerr” should have been a dead-giveaway that this is just a madman’s fantasy (as Joker says “the best memory is multiple choice”). Still the origin plays on the idea that Joe Kerr has one bad day: He’s a struggling stand-up comic with a pregnant wife and no money to support her. He decides to do one crime job to score a pay day, just to move his family out of the ghetto and into a nicer part of town. Instead, just hours before committing his crime, he finds out his wife (and unborn child) had died in a freak accident. He’s bullied by his criminal associates to continue with their plan (despite having no reason now that his wife is dead) and during the break-in (at a chemical plant), Kerr encounters Batman and slips into a vat of chemicals. Disfigured to look like a clown, the stand-up comedian’s “one bad day” is finished. His mind is broken; he becomes “The Joker.”

Batman rescues Gordon and finds that he has not gone insane. Joker’s theory was ruined. Instead Batman tells Joker that he’s the only crazy person here, to which Joker observes that Batman is just as loony as he is. Though Batman tries to offer Joker some mercy, stating his desire to avoid the seemingly-inevitable fight to the death, Joker waves it off and says that its too late for that.

That’s when things get interesting.

Joker decides to tell a joke about two inmates at an insane asylum. After the punchline, he (naturally) breaks into a fit of giggles and, amazingly, Batman too smirks and and then starts to laugh. Both men, enemies to their core, share in a laugh as Batman leans over and puts his arms on Joker’s shoulders, laughing historically. It really needs to be seen to be appreciated… 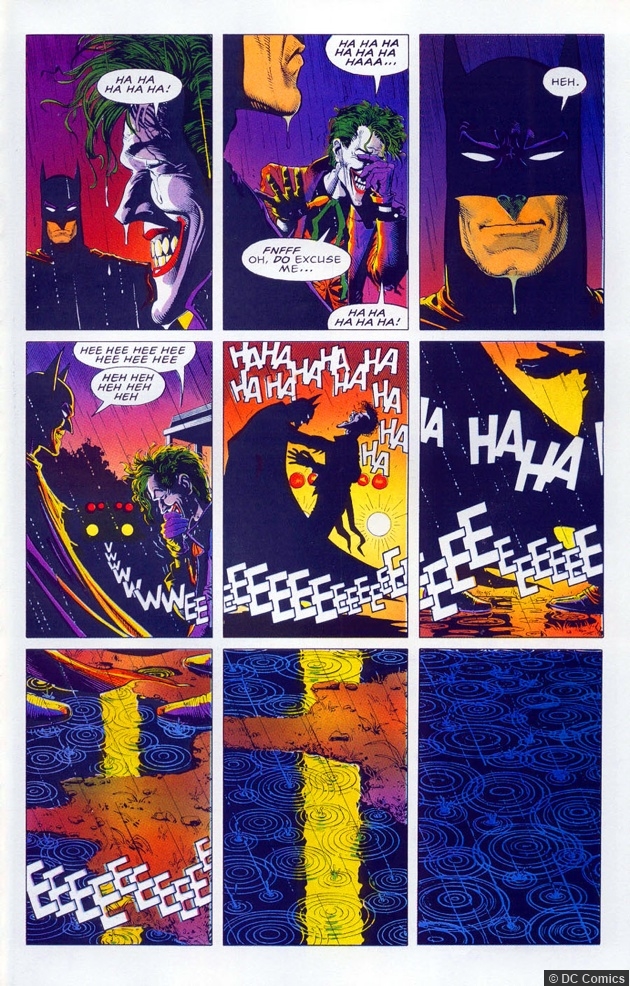 At the time, DC comics had not yet started the “Elseworlds” series (which allowed for stand-alone non-canon stories). Thus Killing Joke, while it could be disconnected from other, on-going storylines, could not significantly alter what was going on with Batman in general.

They couldn’t kill the Joker, in other words, but that’s exactly what Batman does.

Moore denies it, but Bolland drew it so that it was implied: Batman chokes the Joker to death in the final frames of the comic. Joker’s intention was to break Gordon, but in doing so he actually “broke” Batman, and convinced him that there was a justifiable reason to break his famous “one rule” (no killing). Joker paralyzed one person and tortured another, all to prove a point. He’s too dangerous to be left alive; so Batman ended him for good.

The Killing Joke (perfectly titled, since the joke that Joker tells is what finally does him in) was envisioned to be the final Batman vs Joker story. Its ending was left ambiguous because of outside factors, but when viewed on its own it allows for one of the most concise and engrossing examinations of Batman and his greatest nemesis. For years fans have been waiting and waiting to see a DC animated movie adaptation of the story and finally it has arrived.

And as long as you start the movie 30 minutes in, it’s a tremendously faithful adaptation. If you watch the whole 76 minute movie, prepare to spend the first third of it severely disappointed.

Because the story is so brisk, the producers decided to “pad” the tale with what they call “an extended prologue.” Actually it’s a completely unconnected segment that plays like a lost episode of Batman TAS…and not a good one.

The focus of this opening is Barbara Gordon (Batgirl) and her quest to prove herself to her mentor/lover (!) Batman. The big reveal is that Barbara and Bruce have been fighting against repressed sexual chemistry for a while now, and finally let it all out. It’s unnecessary, tacked-on and hackneyed. Even considering it on its own merits (because few Batman stories are going to look good when measured up against The Killing Joke) it’s a disappointment: With a go-nowhere plot and some terrible voice acting. It was designed to pad the story, but it doesn’t do that: It pads the run time. It makes the movie longer only by forcing you to sit through drivel for 30 minutes before the real show begins. 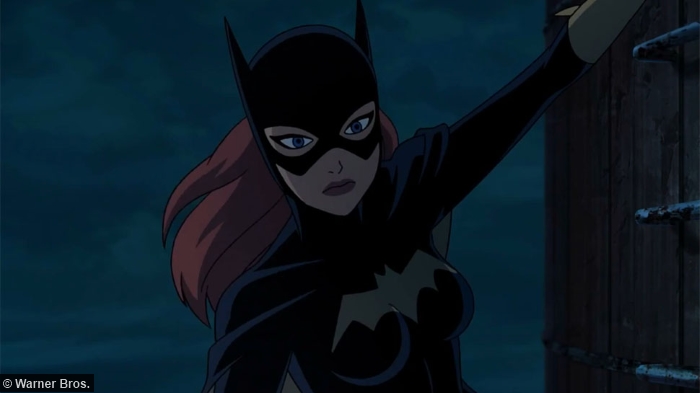 If they insisted on stretching the story, they could have at least tied it in to the Joker. There is a moment just before the “Killing Joke” part of the movie begins, where Batman encounters a room full of corpses that have been mutilated to look like the Joker (with stretched and hideous smiles). Lt. Bullock tells Batman that the victims were all from a Dentist Convention who went missing three years prior. There’s a perfect opportunity to explore a previous encounter with the Joker. That at least would have fit into the greater context of the story. The prologue we got dealt with ridiculous cliches about crime bosses and the nephew of a Godfather-like character, who spits moronic one-liners out with every other sentence.

Honestly, a prologue/padding/stretched-out run-time didn’t need to happen at all. Barbara didn’t need to be “explored” nor did her trumped-up relationship with Batman. She’s a pointless victim in the comic; she’s there to kickstart Joker’s torment of Commissioner Gordon (Barbara’s dad). This isn’t Barbara’s story; this is Batman and Joker’s story. The movie could have been marketed as a 45 minute long, faithful adaptation of the “short but brilliant comic” and no one would have complained. They could have said “it’s short, but it’s painstakingly recreated” and it would have been great. The art style isn’t as stunning as Bolland’s 1988 drawings (it’s a little too shiny and “fake” whereas the comic went for “realism”), but it’s good enough and the voice acting (in the second half) is great; the plot is obviously great too. It’s all great. This could have been great. Instead it’s a great forty-five minutes that is dragged down terribly by a horrible first half-hour.

The only complaint to be had in the final forty-five minutes is, unfortunately, at the crucial moment when the Joker tells his “killing joke.” Hamil rushes through the punchline instead of giving it a pause to help sell the joke. It kind of makes it…unfunny, which makes Batman’s reaction to it all the more unrealistic. Other than that minor quibble there’s absolutely no complaints to be had about the actual Killing Joke adaptation. 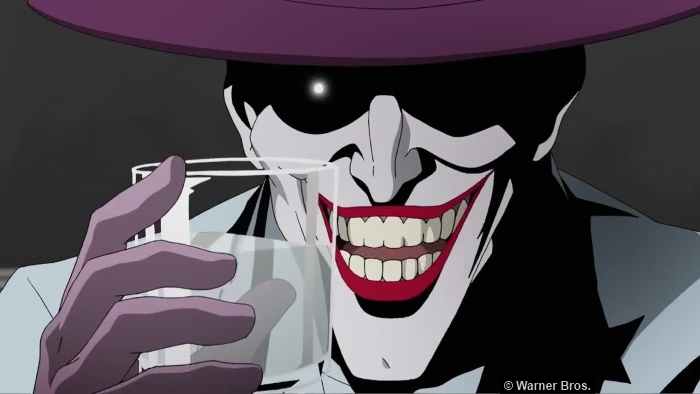 7/10 = The first half scores a terrible 3/10. Even on its own it’s lousy. The second part deserves a 10/10 as it’s one of the most faithful adaptations to a DC story done thus far.

Watch the final forty-five and pretend the rest never happened.