In January we looked at the brilliant comedy-slash-philosophical examination that is Groundhog Day. in February it was Sleepless in Seattle, easily one of the greatest “romantic-comedies” in history. In March we remembered the late-great Robin Williams and the endlessly-rewatchable comedic stylings of Mrs. Doubtfire.

Shifting gears to a different genre, we move from comedies to one of 1993’s best action-dramas.

The Fugitive is, famously, based on the popular 1960’s television series, the finale of which (featuring the confrontation with the infamous “one-armed man”) was, in its day, the most-watched television event ever, with close to 50% of all United States television sets tuned in for the two-night special. Despite its tremendous popularity, the show only ran for four years and ended only because lead actor David Janssen grew tired of the role.

It aired during an era where television shows were extremely formulaic and episodic. Once you know the set-up (conveniently recounted at the beginning of every episode) you’re able to dive into the hour-long story as Dr. Kimble vagabonds into town, under a fake name, doing good deeds and getting into (and out of) mischief. It was an easy format for weekly stories, copied by many subsequent shows (particularly the Bixby/Ferrigno Incredible Hulk series). After ending in 1967, the show lingered on in syndication but nothing else ever came of it.

Then, in the early 90’s someone had the idea of taking the concept and turning it into a movie. It certainly wasn’t the first big screen adaptation of a TV show, but where most show-to-movie translations fail, The Fugitive worked perfectly. It helped that the concept was tailor-made for a two-hour story, even more so than a perpetual hour-long series. It may have been riveting television a generation ago, but today such a formula would have failed. In fact it did fail; the 2001 remake lasted only a single season. 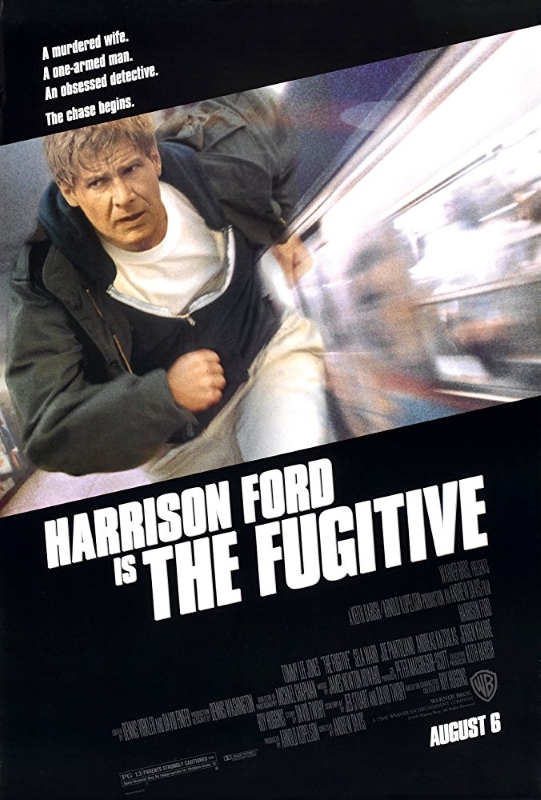 What’s amazing about the movie is how faithful it is in recreating the little things that defined the show, while also being a movie so well made you could watch it without any historical context and appreciate it.

In the show, Dr. Kimble and his wife have a loud argument, he leaves the house to blow off steam, comes back to find his wife murdered and a one-armed man fleeing the scene. Since no one else saw this strange assailant, Kimble is presumed the killer and found guilty. A train carrying Kimble to death row then crashes, he escapes and goes on the run, both to evade recapture and to locate the real killer of his wife. He goes from town to town doing (the aforementioned) good deeds, and avoiding the clutches of the law man Phillip Gerard, who hunts him relentlessly. 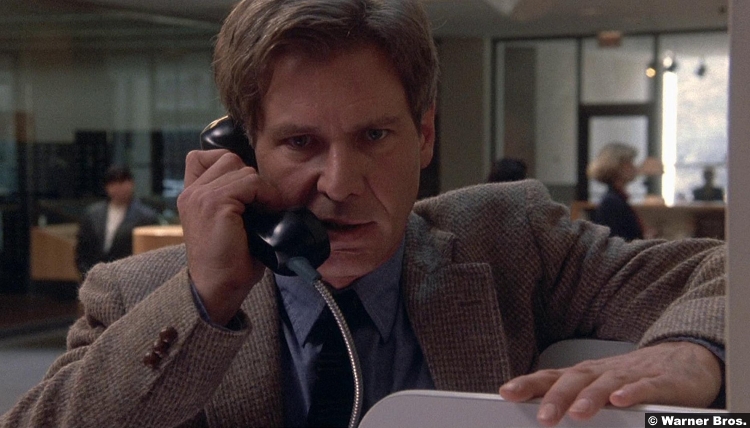 The movie recreates this almost entirely, and while it adds in a few plot tweaks to help it work as a two-hour story, the crux of the characters and story is present: He’s convicted on account of bad luck (his wife calls his name in the 911 call, which seems to implicate him), and he escapes on account of good luck (the train that crashes into the bus carrying him to death row). He goes on the run, working to solve the mystery of his wife’s murder, but can’t help himself except do good deeds along the way, all while being hunted by law man Phillip Gerard.

It’s the same story, and yet it works infinitely better as a film.

And as great as Harrison Ford is, it’s Tommy Lee Jones who makes the movie. Ford has to be dire, sober and serious. Jones, on the other hand, is able to stretch out a bit, with a sharp wit, wry delivery and plenty of supporting castmates to riff with. His character has such a dismissive contempt for Kimble (the way he says “Doctor Richard Kimble”), you’re clearly supposed to root against him, but Jones is just so darn captivating you end up rooting for both to meet in the middle. Jones reportedly told castmate Joe Pantoliano to cut loose and have fun since, “it’s not like anyone is going to win any awards for this film.” 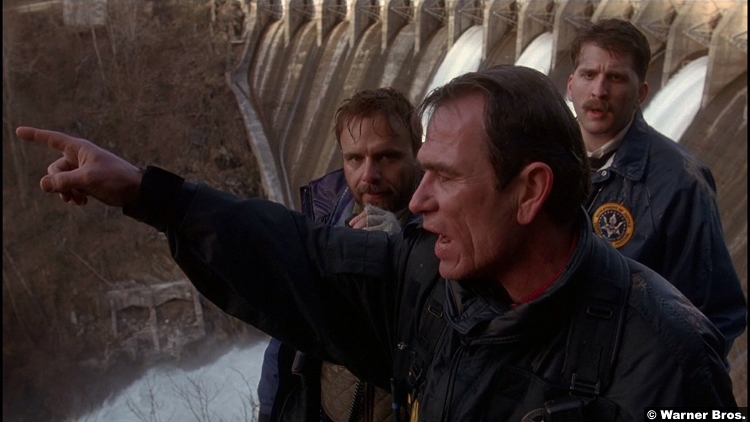 In the end Jones won the Best Supporting Actor Oscar.

The other hero of the movie is the team of editors (there were six, the most ever to be nominated for an Oscar for work on a single movie). The movie is cut so that the first hour builds to a series of mini-climaxes, before settling down and laying the foundation for the climax in the final half hour. Most films would feature a big set piece at the end of act one, then another midway through the movie, then another in the climax. The Fugitive plays it differently. The big train-crash scene happens within the films first half hour, then the equally-as-famous tunnel (“I didn’t kill my wife” / “I don’t care”) scene happens less than half an hour after that. Bang-bang the movie gives you two huge moments within what ought to be the first act. It puts the audience on edge and keeps them expecting the next one, which doesn’t come until nearly an hour later (when Kimble just barely slips away during the St. Patty parade). So much material was cut the film could have four hours long, but director Andrew Davis (who’d just finished Under Siege) chipped away at it, more and more. Even after Warner Bros. execs said it was perfect, Davis kept working, cutting another twenty minutes until the movie was more or less perfect. 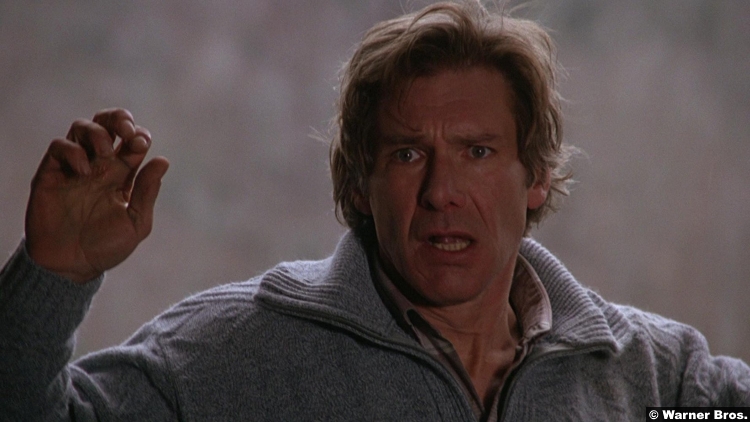 It was released in the late-summer, with Jurassic Park still dominating and a similar-genre hit The Firm already out, as was Sleepless in Seattle and Cliffhanger. 1993 was a great year for film, but the combination of Ford and Jones, a tight and well-edited story and some memorable set pieces propelled the movie to be the third-highest grossing film of the year. When you think of 1993 movies, you probably think of Jurassic Park or Tombstone. When you think of Harrison Ford movies, you probably think of Indiana Jones, Star Wars, or the Jack Ryan movies. But don’t forget about The Fugitive. It’s still tense, still tight, still fun and still awesome twenty five years later.