Groundhog Day appears, at first glance, to be a basic romantic comedy with a slightly bizarre premise. It’s the kind of movie a nerd could watch with a girlfriend or wife and she would enjoy it, thinking it was in the same mold as You’ve Got Mail or…I dunno, While You Were Sleeping? Let’s go with that. The point is she’d watch it and have no idea what it really is. 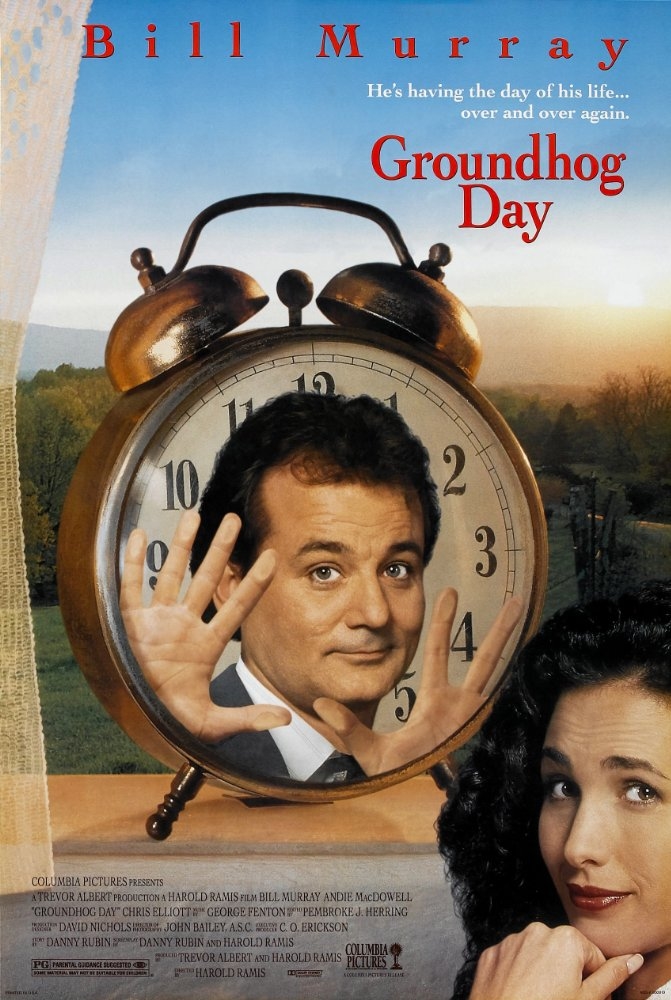 In truth, Groundhog Day is a gateway drug to loving science fiction/fantasy. Behind Bill Murray’s wonderful one-liners and Andie MacDowell’s peak-1990’s adorableness lies a sci-fi premise that, on paper, you’d probably never convince your genre-hating girlfriend to try out. On the other hand it’s a movie that, on paper, sounds like it was ripped out of a Ray Bradbury short story collection:

A smug and self-centered man is forced by cosmic forces beyond his control to relive the same day over and over until he learns the value of other people’s lives.

That’s patented dime store pulp right there. Sure you could say that it sounds like a twist on A Christmas Carol, but Dicken’s classic holiday tale was basically a time travel story anyway, so…the point stands.

You could expand the movie’s one-sentence summary by talking about the man—Phil Connors—and his apparent suicidal tendencies, his general megalomania or his seeming lack of any basic human decency, but that’s not going win you any co-watchers. The fact is this is a premise that could have been made as a straight and serious sci-fi/fantasy movie, with someone like Keanu Reeves in the lead role, and it would have come and gone with as much attachment to pop culture as Johnny Mnemonic. There just wasn’t an audience for that kind of movie to achieve any large-scale popularity in 1993.

Instead writer/director Harold Ramis (Caddyshack, National Lampoon’s Vacation, Ghostbusters) took the concept as originally conceived by Danny Rubin, put it in the hands of Bill Murray and made this…

a screwball romantic comedy that checks every box:

And when it’s over you can have a discussion on the existential implications of reliving the same day over and over in order to achieve an arbitrarily-assigned state of contentment. You can’t get that from While You Were Sleeping. 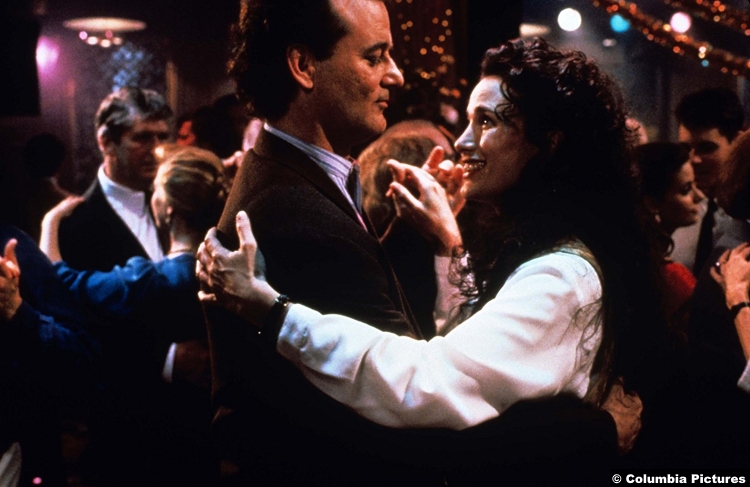 Here we are, a quarter-century removed from the release, and the movie is still worth an annual watch (and not just because it’s a “holiday” movie) and has completely baked itself into the pop culture pie. “Groundhog Day” as become an easy short-hand for the monotonous grind of daily routine. It’s the disgruntled side of déjà vu. It has endured for a quarter-century because it rose beyond its clever premise. It doesn’t just ride the single joke to death, but uses it to explore a man’s character, heart and soul. Had the movie just been ninety minutes of jokes with a pat ending, it would have been forgotten within a year as a good enough comedy not built to last. Instead it took seriously the gimmick of reliving the same day over and over, while putting the humor and silliness on the periphery.

People who don’t want to read anything into the movie don’t need to; they can just enjoy a great, sharply-written comedy. But it’s telling that in the weeks following the film’s February 1993 premiere, Ramis and Rubin began receiving fan mail from people with more to say than just “thanks for a funny movie.” Letters poured in from Buddhists, Jews, psychologists and more; people who heard about the movie but never would have seen it had they not caught a little of their belief system or philosophies in the description. They watched the movie and, while they certainly laughed throughout, they also walked away nodding silently and discussing the implications on the car ride home.

That’s what’s so unique about the movie.

It’s akin to Back to the Future or Ferris Bueler’s Day Off (no, really) in that it can be enjoyed on the surface level or, if you want to dig deep, you can go down a rabbit hole of theories, speculations, and deep implications. It’s a movie that, despite (or maybe because of) it’s repetitive premise, can be rewatched year after year without it ever getting old or growing stale. As Phil grows from confused to angry to complacent to insane to euphoric and finally content, the audience is tempted to pause, rewind, reexamine and reconsider.

Probably the most prevalent question of all is “How many Groundhog Days did he experience?”

The original storyteller, Danny Rubin, first conceived of a lifetime of Groundhog Days. He wanted Phil to experience what it would be like if he could live sixty or so years worth of the same day over again (Phil was forty, so that would mean experiencing the loop till he was—from his perspective—one hundred years old). Columbia Pictures, who were releasing the movie, worried that audiences would be appalled at such a timelapse (even though it’s imperceivable to the viewer). Ramis selectively removed any references to how much time had specifically passed, so he could lie to the studio and say Phil only suffered for two weeks. In truth much more time must have passed: He masters French poetry, piano playing, and ballroom dancing, not to mention the daily routines of countless townspeople (down to the tiniest details). Only about thirty-eight days are shown on screen but taking all factors into consideration, Phil probably spent a minimum of thirty-eight years trapped in the time loop. 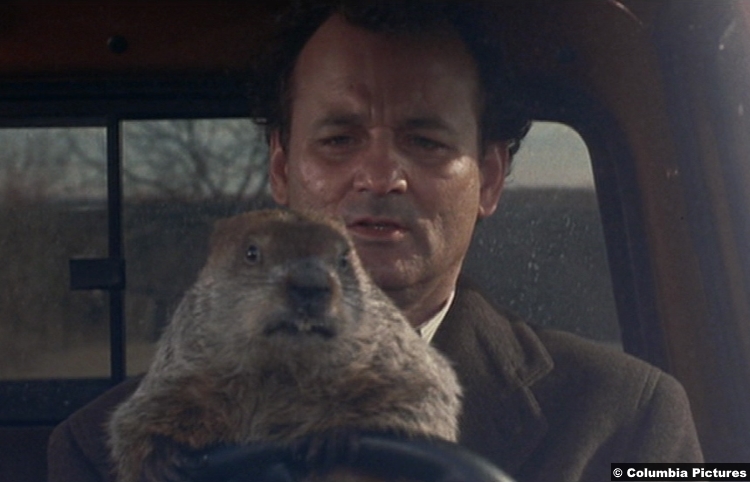 Discussions like that are fun, and there are an unsurprisingly large number of places you can find online devoted to breaking it all down. But the real joy of Groundhog Day is in its watchability. The movie is effortlessly fun, funny and romantic (without slipping into melodrama). It remains, arguably, the best and most layered performance by Bill Murray (an opinion shared by the man himself) and a movie that proves you don’t need lasers, light shows or far-out locations to have an effective science fiction/fantasy movie. True sci-fi is about using fantastic concepts to explore the human condition. That Groundhog Day is able to do so while also splitting sides with its humor makes it one of the best genre films ever released…