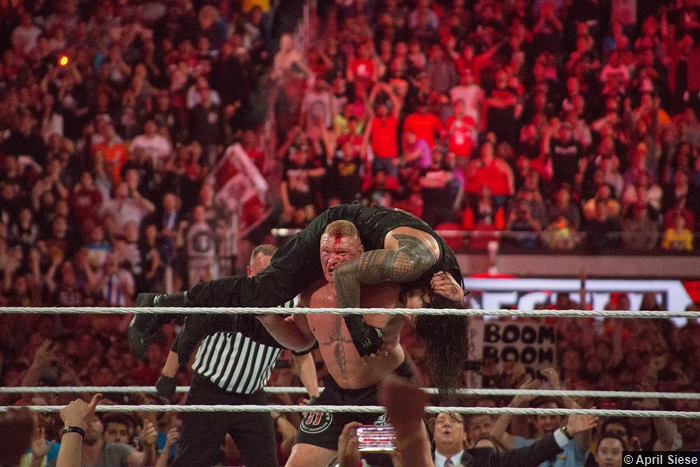 Since the very first WrestleMania in 1985, WrestleMania has become the biggest event in the world of sports entertainment and has earned its moniker of “The Grandest Stage of Them All”, hosting countless legendary matches and moments that resonate for a lifetime and, for the 34th year in a row, careers would be made and legends would be immortalized as WWE presents WrestleMania 34, which came to you, live on pay-per-view and the WWE Network, from the Mercedes-Benz Superdome in New Orleans, LA. “The Big Easy” would be host to a rematch four years in the making as “The Beast” Brock Lesnar would put the Universal Championship on the line against “The Big Dog” Roman Reigns. Since becoming the #1 Contender by winning the Elimination Chamber Match at WWE Elimination Chamber, Roman Reigns has not been shy about taking the Universal Champion to task for his part-time schedule, alleging that Brock Lesnar “hides” behind his contract and does not care about anyone but himself while Brock has responded by assaulting “The Big Dog” on more than one occasion. Despite taking a beating from “The Beast”, Roman has not backed down and now these two are set for a collision on “The Grandest Stage of Them All”. Can Roman Reigns slay “The Beast” once and for all and claim the Universal Championship or will Brock Lesnar add Roman Reigns to the list of Superstars Brock has conquered at WrestleMania?

AJ Styles and Shinsuke Nakamura have both earned their legendary status in the wrestling world, having won championships all over the world, but now these two friendly rivals would bring their dream match to “The Grandest Stage of Them All” with the most prestigious championship in WWE on the line as “The Phenomenal” AJ Styles would defend the WWE Championship against 2018 Royal Rumble Match winner Shinsuke Nakamura at WrestleMania. For weeks, Styles and Nakamura have played mind games with each other heading into WrestleMania with Nakamura claiming that AJ is too emotional while the WWE Champion argues that his emotion is what drives him and, now, in a surreal WrestleMania showdown, these two battle-hardened competitors would look to make a WrestleMania moment all their own.

Widely considered to be the biggest WWE signing in recent history, former UFC Bantamweight Champion “Rowdy” Ronda Rousey has wasted no time in making a major impact in WWE by getting in the face of RAW Commissioner Stephanie McMahon and her husband, WWE COO Triple H, and, after enlightening Ronda Rousey on the true intentions of WWE’s power couple, RAW General Manager Kurt Angle has found himself in the middle of this rivalry and this rivalry would culminate at “The Show of Shows” when Ronda Rousey makes her in-ring debut, teaming with Kurt Angle to face Stephanie McMahon & Triple H in a Mixed Tag Match! Will “The Baddest Woman on the Planet” and the WWE Hall of Famer make a formidable enough team to defeat Stephanie & Triple H or will the power couple humble Ronda Rousey and make an example out of Rousey as well as Kurt Angle?

Over the years, WrestleMania has become synonymous with dreams coming true and that has been especially true for Daniel Bryan. The last time that WrestleMania was in New Orleans, Daniel Bryan made an improbable dream come true when he defeated Triple H in the opening match of WrestleMania 30 to earn his way into the main event that very same night where he would defeat Batista and Randy Orton in a Triple Threat Match to become the WWE World Heavyweight Champion. Unfortunately, injuries would plague Daniel Bryan and ultimately result in his retirement from in-ring competition. Following his retirement, Daniel Bryan would become the SmackDown LIVE General Manager but Daniel would never give up his dream of one day returning to the ring and Daniel’s passion and determination would pay off as, three years after what was considered to be his last match, doctors would finally clear Daniel Bryan to return to in-ring competition and what better place to return to action than WrestleMania. Now, in the same city where he won the WWE World Heavyweight Title, Daniel Bryan would join forces with SmackDown LIVE Commissioner Shane McMahon to face two Superstars who have been a thorn in their sides for months now in Kevin Owens & Sami Zayn. After Owens & Zayn attacked Shane McMahon a few weeks ago, Daniel Bryan would fire Owens & Zayn but once Daniel found himself victimized by Owens & Zayn, Daniel’s return match became clear and now Daniel and Shane will take a more hands-on approach to dealing with Kevin Owens & Sami Zayn at WrestleMania in a match that Owens & Zayn must win to get reinstated to SmackDown LIVE.

In what could end up being a show-stealing match on “The Grandest Stage of Them All”, The Miz would defend the Intercontinental Championship in a Triple Threat Match against both Finn Balor and Seth Rollins where the first Superstar to earn a pinfall or submission will leave the Mercedes-Benz Superdome as the Intercontinental Champion. After Braun Strowman single-handedly won a tag team battle royal to earn a shot at the RAW Tag Team Titles at WrestleMania, “The Monster Among Men” would be forced to find a partner to challenge Cesaro & Sheamus for the tag titles. Who will be Strowman’s partner and can Braun’s team take the RAW Tag Team Titles from Cesaro & Sheamus?

The SmackDown Tag Team Titles would also be on the line at WrestleMania as The Usos would defend the titles against longtime rivals The New Day and the intimidating Bludgeon Brothers in a Triple Threat Tag Match where the first team to score a pinfall or submission will be the SmackDown Tag Team Champions. After learning that Alexa Bliss has just been using her the entire time they have been friends, a fire has been lit under “The Irresistible Force” Nia Jax as Nia has come after the RAW Women’s Champion full-force and, at WrestleMania, there would be nowhere for “The Goddess” to run as Alexa Bliss would defend the RAW Women’s Title against Nia Jax.

After winning the first ever Women’s Royal Rumble Match back in January, Asuka had the choice of challenging either RAW Women’s Champion Alexa Bliss or SmackDown Women’s Champion Charlotte Flair and, after weeks of speculation, “The Empress of Tomorrow” would make her choice clear at Fastlane. Now, on “The Grandest Stage of Them All”, the undefeated Asuka would make her WrestleMania debut to challenge Charlotte Flair for the SmackDown Women’s Title. Can Asuka dethrone “The Queen” and claim the SmackDown Women’s Title or will Charlotte Flair end the fabled streak of “The Empress of Tomorrow”? Also, the United States Championship would be defended at WrestleMania as “The Viper” Randy Orton defends the prestigious United States Title against “The Glorious One” Bobby Roode, “The Modern Day Maharaja” Jinder Mahal, and “The Lion of Bulgaria” Rusev in a Fatal 4-Way Match.