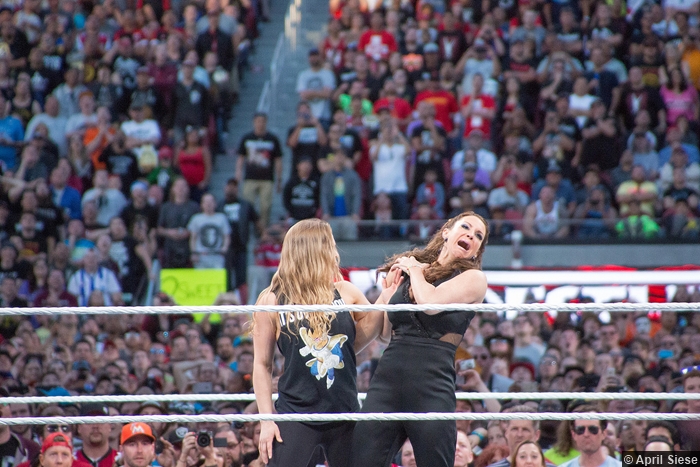 The 31st annual WWE Royal Rumble came to you, live on pay-per-view and the WWE Network, from the Wells Fargo Center in Philadelphia, PA. For three decades, the annual Royal Rumble has created countless moments and propelled several legendary careers as Superstars like Hulk Hogan, Bret Hart, Shawn Michaels, Stone Cold Steve Austin, The Rock, Triple H, Brock Lesnar, Batista, Randy Orton, John Cena, and The Undertaker have all reaped the grand benefits of the Royal Rumble Match, surviving the 30-man melee to earn themselves a shot at a World Title on “The Grandest Stage of Them All” WrestleMania. This year, appropriately enough on the 30th anniversary of the unpredictable pay-per-view, 30 Superstars from RAW and SmackDown LIVE will wage war inside the squared circle in pursuit of their opportunity at immortality. John Cena, Roman Reigns, The Miz, Randy Orton, Shinsuke Nakamura, Finn Balor, Elias, Baron Corbin, Bray Wyatt, “Woken” Matt Hardy, and many others will all be looking to etch their names in the history books. Some of them have been there before while others have yet to taste the success of winning the Royal Rumble Match but all of them are hungry to be on the grand stage of WrestleMania across from either the Universal Champion or the WWE Champion in pursuit of being on top of the mountain as a World Champion.

For thirty years, men have fought for the right to compete for championship gold at WrestleMania but, as they have done for the past several years, it would be time for the women of WWE to make history one more time as, for the first time ever, there will be a 30-Woman Royal Rumble Match with the winner earning a shot at either the RAW Women’s Title or the SmackDown Women’s Title at WrestleMania. With Superstars like the undefeated Asuka, Becky Lynch, Sasha Banks, Bayley, Mickie James, Ruby Riott, Carmella, Natalya, Naomi, and Nia Jax all ready to battle in the historic matchup, only one of them can punch their ticket to WrestleMania by winning the Women’s Royal Rumble Match.

While the 30-Man Royal Rumble Match would determine who will challenge for either the Universal Championship or the WWE Championship at WrestleMania, the Royal Rumble pay-per-view could also determine who will be defending those respective titles on “The Grandest Stage of Them All”. In the Universal Title match, Brock Lesnar would have his work cut out for him when he defends the Universal Title in a Triple Threat Match against “The Monster Among Men” Braun Strowman and “The Big Red Machine” Kane in a match where Brock doesn’t even have to be involved in the finish of the match to lose the title. Which one of these dangerous, destructive monsters will leave the Royal Rumble as the Universal Champion and what will it take for them to survive? While Brock Lesnar faces an uphill battle of his own for the Universal Title, AJ Styles finds himself in a difficult position himself at the Royal Rumble as “The Phenomenal One” would defend the WWE Championship against both Kevin Owens & Sami Zayn in a 2-on-1 Handicap Match. AJ has stated on multiple occasions that he will not allow Kevin Owens & Sami Zayn to become the first ever co-WWE Champions but the champion has to be concerned with facing both Owens & Zayn at the same time with the title on the line. Can AJ Styles find a way to leave as the WWE Champion or will the odds prove to be too much for even AJ Styles to handle, providing us with the first ever co-WWE Champions?