Your SO OF COURSE preview of WWE WrestleMania 34

LAST TIME ON SO OF COURSE, SmackDown put us in the Fast Lane to the biggest show of the year. All the B-PPV’s are behind us now, though. All that’s left is the big tuna. The grand-daddy: The seven hour extravaganza knows as…

That theme song is the closest New Jack will ever get to the WWE Hall of Fame.

As is customary, the show will be long and packed. So let’s not waste any more time. THIS is your SO OF COURSE preview of WWE WRESTLE SCRATCH THAT SPORTS ENTERTAINMENT 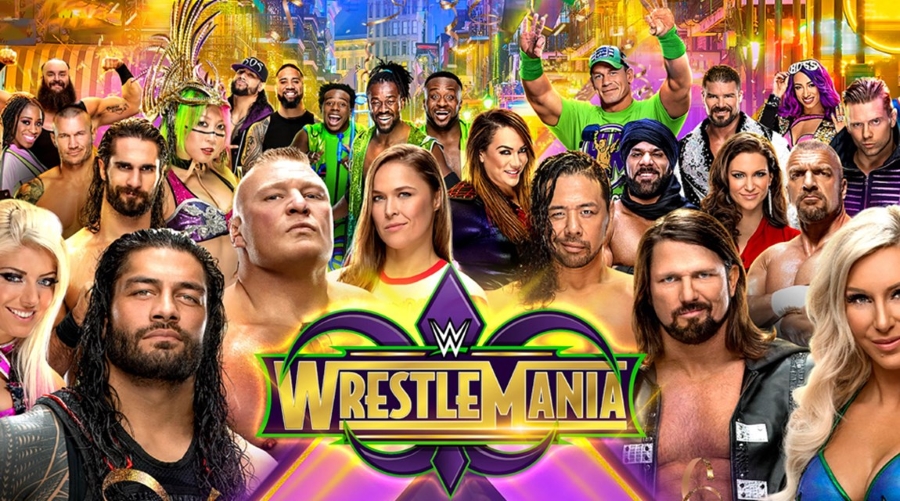 Expect plenty of action as the pre show will run two hours long. Also expect a sad looking stadium peppered with hundreds of people, while the near-hundred thousand remain outside in line, getting Barney Fife’d. No snarky Vince pics yet, since not even Vince watches the preshow…

A bunch of nothing happens, then Elias wins, setting up a thing with the Rock later in the night. The life-expectancy of that poor trophy is usually less than a month. I predict this one will not survive the night.

SO OF COURSE WWE will sign Gronk and give him the win to score that cheap, cheap mainstream publicity.

As great as Cedric Alexander is, there is something special in Mustafa Ali, and WWE would be wise to capitalize on it. Give him the win and see if he can’t be the spark to take the (recently improved to the point of…dare I say, “must watch”) purple show to the next level.

SO OF COURSE WWE will sign Spike Dudley and let him win an impromptu Triple Threat.

Becky Lynch needs this. She has had so many disappointing PPV finishes despite being such a critical part of the SmackDown women’s roster. Throw her a bone.

MUSIC VIDEO TO GET YOU HYPED FOR THE SHOW

RANDY ORTON vs BOBBY ROODE vs JINDER MAHAL vs RUSEV

WHAT YOUR NON-REGULAR WRESTLING FRIENDS WILL THINK: “I remember when Randy Orton and Mohammad Hassan were young up-and-comers…I like the European guy….lol is that really Bobby Roode’s theme song? I love it.”

WHAT IT SHOULD BE: A victory for Rusev, duh.

WHAT YOUR NON-REGULAR WRESTLING FRIENDS WILL THINK: “That bearded dude is the most popular guy on the show. Why isn’t he the top star?” and “Those two other bearded dudes are great. Why aren’t they the top heels?” and “Wait, those two guys are the bosses, and those two guys are fired…so why are they wrestling? I’ve never understood why you’d give someone you fired from wrestling the right to be rehired if they win a wrestling match; if you want them wrestling you wouldn’t have fired them.”

WHAT IT SHOULD BE: Bryan going bananas then eating the pin, because as heartbreaking as it would be to see Bryan lose his big comeback, he’s still hot as the sun and Owens and Zayn need this. Not only do they need it in kayfabe, but they need the signature win to remain relevant as a tag team, and I really want them to be a team for a while. Don’t break up until next year, please.

THE USOS vs NEW DAY vs THE BLUDGEON BROS.

WHAT YOUR NON-REGULAR WRESTLING FRIENDS WILL THINK: “Those Samoans are awesome. That trio of nerds is awesome. That…what the heck are those guys supposed to be? JRPG mini-bosses?”

WHAT IT SHOULD BE: A showcase for the Usos. That sounds weird to say, considering they’re the vets of the group, but this will be their first main-show WrestleMania appearance ever. Good for them. It only took them shedding their “Samoan Cenas” persona and finding their own voice. Suddenly they went from stale and boring to must-see. As great as New Day are, I’m ready for them to move on to something else (not break up, just transition out of an endless string of PPV matches with the Usos). The Bludgeon Bros. are just here because…the Andre Battle Royal was full?

WHAT YOUR NON-REGULAR WRESTLING FRIENDS WILL THINK: “wow she’s hot.” and “is that…Kharma?”

WHAT IT SHOULD BE: Unfortunately, despite being a great champion, and really blossoming on the main-roster, this is the perfect time to end Alexa Bliss’ title run. It’s also a great match to cut short, since most Mania’s have that “x beats y in 10 seconds” nothingburger contest, usually because when they finally get around to plotting out the times of these things, someone realizes they have too many matches for even a SEVEN HOUR show. Something will have to give and the tiny people are already on the preshow. So Jax wins by sitting on Alexa and winning in seconds like when I play thumb wrestling with my children.

I literally just sit on them.

JOHN CENA vs THE UNDERTAKER

WHAT YOUR NON-REGULAR WRESTLING FRIENDS WILL THINK: “lol has John Cena ever changed his wardrobe in fifteen years?” (*gong*)…”oh how sad.”

THE MIZ vs SETH ROLLINS vs FINN BALOR

WHAT YOUR NON-REGULAR WRESTLING FRIENDS WILL THINK: “I remember when the Miz would have been the least popular person in this scenario.”

WHAT IT SHOULD BE: This generation’s Angle vs Benoit vs Guerrero from WrestleMania 2000. Fast, fun, with a satisfying finish that elevates all parties.

WHAT YOUR NON-REGULAR WRESTLING FRIENDS WILL THINK: “The last time I saw Cesaro was WrestleMania 30, when he looked like he’d be a world champion within a year. What happened?” (‘not that’ will come the reply). Also: “Wow that guy is big, he doesn’t even need a partner, or if gets one it should be like a really small person, not like Yoda but like…a Fraggle.”

WHAT IT SHOULD BE: Braun either single-handedly winning the tag-titles, because that’s a fun story that would eat up a few months till he returns to the main-event scene where he belongs, or Braun and a very tiny (Fraggle, if you will) person winning the tag titles, which basically accomplishes the same goal but gives Strowman someone to play off for a few months and continue to show his great comedic timing.

WHAT YOUR NON-REGULAR WRESTLING FRIENDS WILL THINK: “Am I taking LSD right now? Is Ronda Rousey a time traveler gone back to SummerSlam 2000?”

WHAT IT SHOULD BE: Triple H working over Kurt, Rousey working over Stephanie, and then for the love of all that is good, Rousey pantsing Triple H and armbarring Stephanie into submission.

WHAT YOUR NON-REGULAR WRESTLING FRIENDS WILL THINK: “Oh hey it’s a Flair.” followed by “That woman has murdered at least a flight attendant in her lifetime.”

WHAT IT SHOULD BE: Ten minutes of Cory Graves shouting some variant of “that’s not fair to Flair!” Followed by a kick to the face and an Asuka victory. If they can pull it off, I’d love to see Asuka go coast to coast, undefeated until next Mania, to face an undefeated Ronda Rousey in the main-event. But that’s dependent on a lot of factors, not the least of which is Ronda successfully getting over. But that’s getting ahead of ourselves. Asuka winning is the only right call.

WHAT IT SHOULD BE: The main-event. Thirty minutes of…just do the New Japan match.

WHAT YOUR NON-REGULAR WRESTLING FRIENDS WILL THINK: “We’re doing this again?!”

WHAT IT SHOULD BE: Not doing this again.