Horror movies are here to stay.

Just a decade ago it was rare to see more than three or four in a year, and they were almost always clustered around middle-to-late October, right as Halloween decorations start popping up and people get into the frightful spirit. Today things are much different. Scary movies are no longer just an October event: With the success of Split. Get out and IT, we can expect more studios to release low-budget horror movies in the hopes of landing a hit. The three just referenced currently reside in the top-thirty in terms of worldwide gross this year. If you limit it to domestic gross, they are all in the top-17, with IT sitting at number-5 as the highest grossing R-rated movie ever. None of those films released in October, and the combined budget for the three of them is only fifty million dollars (together they’ve made over a billion). It’s low risk/high reward, so of course Hollywood is going to flood the market.

As a result we’re going to get a lot of crap mixed in with a few gems. And since most horror movies follow the same template it’s almost impossible to know which are good until you sit down and watch.

Insidious 4 was supposed to release this weekend, but it was bumped to January. A few years ago that would signal a bad film getting dumped in a dead month, but Split released in January of this year and for a time was the top-grossing movie in the country. Still, something is needed for the original month for scary movies, so a lesser-known film called “Half to Death” was bumped up and re-titled “Happy Death Day” to scratch the Halloweentime itch. Originally it was a Michael Bay produced, Megan Fox-starring slasher film. Over time both of those infamous names dropped out, Blumhouse (the current custodian of the modern horror film genre) picked it up and here we are. It’s penned by Scott Lobdell, which comic fans will know was one of the key writers on the X-Men series throughout the 1990’s, but he’s probably not going to include this one on too many resumés. 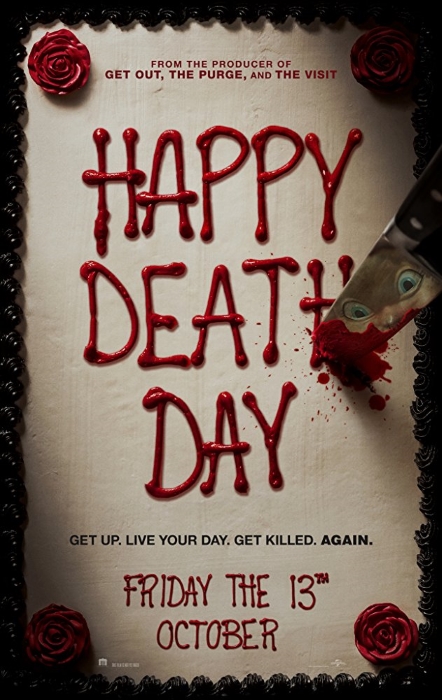 Happy Death Day isn’t a bad movie, but it’s hardly a memorable one. It’s not so terrible that you’ll talk about its crappiness for years to come, but it’s no Get Out either.  It sits in the middle as a perfectly acceptable slasher/horror movie that only needs one good weekend to earn its (sub-5 million) budget back and then some.

Let’s start with the trailer, which is the way most people first get an inkling of a new horror movie (during the screening of another horror movie, typically)…

It’s a little Final Destination and a lot Groundhog Day. The killer of course has a particular look, a tradition in slasher/horror movies dating back to the original Texas Chainsaw Massacre. It’s almost a given that your killer needs a look that is instantly recognizable and either creepy or outright terrifying enough to leave an impression when they’re chasing their victims down a hallway. Halloween nailed it, so did Friday the 13th. Scream has has a mask that is still worn by hundreds of thousands every Halloween, and even non-franchise movies like The Strangers understood this important element in a classic slasher. 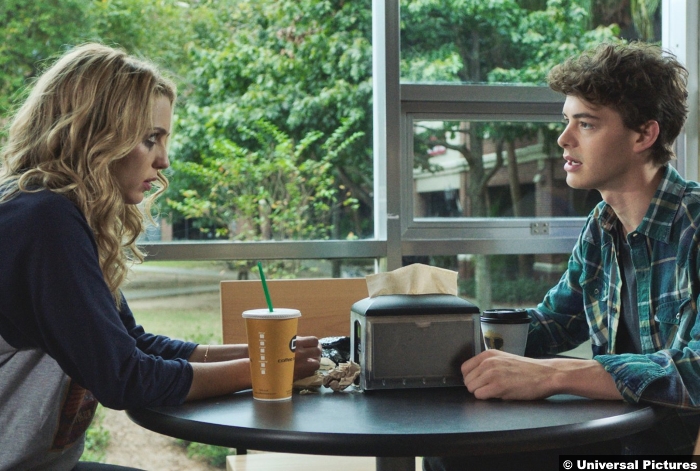 Looking at the trailer for Happy Death Day, it’s hard to know if it’s going to be a laughably bad horror movie or just a contrived one. Judging by the teaser, the film looks cheesy and too high concept to work as a “scary” movie. It would almost be preferable for it to end up a terrible movie because at least you’re guaranteed some kind of a fun time laughing at it. Bland and average movies are usually the worst to sit through.

This movie is average, but it does just enough right to keep it from slipping into boring territory.

All a good horror movie needs are well conceived set pieces, some good mixture of jump scares (where the baddie goes “boo”), window scares (where you see the bad guy creeping up but the victim doesn’t), and atmosphere (that sustained feeling of tension, dread, and angst as someone approaches certain doom). As long as the plot isn’t inane and insulting, even an average horror film can be redeemed by its big moments. All that’s needed is enough connective tissue in the plot to string those moments together. Does Happy Death Day have the tissue? Does it have the moments?

It has enough, but there are flaws worth noting. 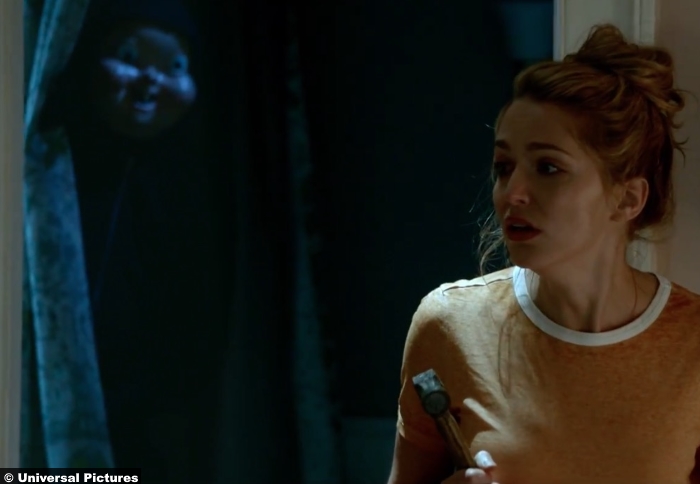 For one thing, the movie takes its sweet time getting to the killing. For a ninety minute movie, it’s surprising that almost a third of that runtime passes before our lead character (“Tree” she’s called) bites it. In fact you can easily break this movie into even thirds:

The first half-hour features Tree’s birthday as we learn what kind of a person she is (not a very nice one). There are the blatant “little events” that stand-out enough for anyone who’s seen Groundhog Day (and that really ought to be everyone) to know that they will be used later by her to prove her power/curse. And just like in Groundhog Day there is no explanation for how or why Tree is able to relive the same day over and over. But then again, Groundhog Day is the gold standard for these sorts of movies, and if it got away with keeping its miracle a mystery, I suppose that sets the precedent.

The second half-hour features Tree dying. Over and over again. Groundhog Day killed Bill Murray a lot too, but it’s a comedy and it played up that aspect of it very well. When you apply that same concept to a slasher it can get repetitive and trite pretty quickly. But other than a five minute montage sequence where Tree gets killed numerous times with little intended “horror” on display, the various ways in which the baby-faced stalker/slasher disposes of its prey offer plenty of momentary thrills. It’s a relief to see a killer who will run—full speed—toward his target. No Michael Myers lumbering strolls and no Freddie Kruger magical appearances. This is a human being trying to kill her who acts like a human being would act when attempting a murder (psychotic and hurried). Along the same lines, the movie deserves credit for how it portrayed Tree. This is not the cliched “run away, stumble and fall and suddenly begin crawling” damsel in distress you find in older horror films. She fights back, and nearly wins more than once. Of the half-dozen (maybe more, I lost count) encounters with the baby-faced killer, Tree only makes a stupid decision once: She gets one good lick in on her assailant, but instead of pouncing and finishing the job, she staggers around and flees, giving her attacker time to recover. Other than that, she behaves like a real person would under such circumstances. 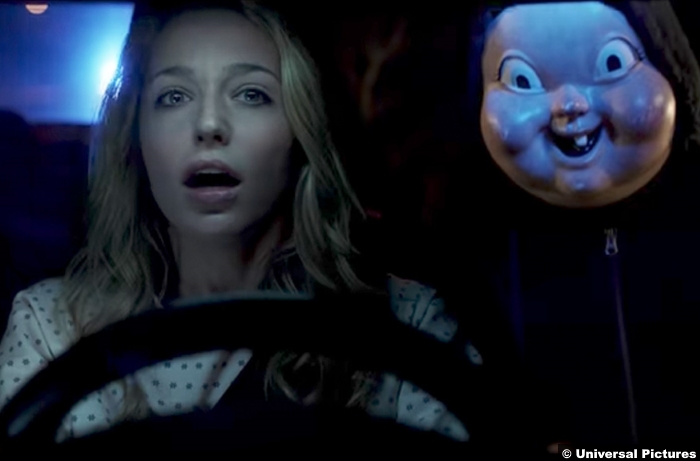 The final half-hour is a series of false-finishes where you think you have the mystery figured out only to have the movie swerve you, right up until the final minute. The film does a good job setting up various potential perps and then slowly knocks them off the list, one by one. Each time, we’re treated to another murder, followed by a start-over where we, the audience, feel like we too are one step closer to figuring it out. This is where I know the movie did its job; had the movie failed I would have been bored and uninvested in knowing who the killer was. The very fact that I stayed engaged throughout the movie, despite its flaws, shows that it was an overall success.

It breaks no new ground. It’s slow to get going. Despite a well-executed central mystery, it progresses from point-A to point-B very predictably. Its characters are shallow and superficial. Some of the dialogue (written and delivered) is cringy.

It is…slight, and yet still slightly entertaining.

And in this era of horror movies, I suppose that’s good enough.

7/10 – It’s a perfectly cromulent movie, but no more. You won’t hate it, but you likely won’t remember it either.