Out of all the DVDs I’ve reviewed for the website, I’d say this collection is probably the one I’ve been most excited about getting my hands on. Some of the matches, especially the latter years, I have seen before, but a lot of them I’ve only heard about, so it was thrilling to be able to sit and watch bouts like the Piper/Valentine Dog-Collar Match, the Scaffold Match between the Midnight Express and The Road Warriors, the infamous “I Quit” match that ended the feud between Tully Blanchard and Magnum T.A. that took place inside a steel cage (back when a steel cage was a massive deal) and a few others. 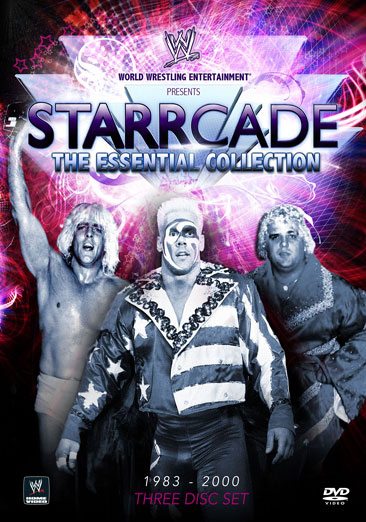 The first disc is split into two parts. To start off, we have a 49min documentary feature that chronicles the event from the original Starrcade in 1983 all the way to the last one in 2000. Talking heads fill us in on what Starrcade meant to both them personally and to the business as a whole.

One of the most refreshing things about the DVD is that WWE doesn’t try to alter or gloss over the history of the “original” Supercard but, to my surprise, let the people involved tell it like it is (never more evident than when it is mentioned that Starrcade was the forerunner to Wrestlemania and without the NWA/WCW event, ‘Mania may never have happened).

The documentary is a really good piece by WWE, but it is far, far too short. With so many stories to tell, so much history and so many characters involved over the decades, less than one hour is, to be frank, an insult. Maybe that’s selfish on my part, but I was left wanting to listen to guys like Dusty more than I was allowed.

The saddest part of the documentary is the chapter devoted to Magnum T.A. The guy was super-popular and, from what is being said, was getting set to be the next big superstar in pro-wrestling (and the NWA’s answer to Hulk Hogan) when he had a career-ending road accident. You can tell from the tone in the voice and the looks on  faces that this hit a lot of his peers very hard.

Moving on from that, the second part of the original disc is the first six in a countdown of the top twenty-five matches, as voted for by fans, to be held at Starrcade. Unlike the recent Intercontinental Championship DVD (where the matches for that set were also voted for by the fans), they are not in chronological order, rather they are listed in reverse-order (25 to 1) based on how many votes they received.

The matches on show are varied in regards to stipulations, styles, talent and production values. The opening match on the selection is Roddy Piper v Hogan from 1996 (promoted as “The Match of the Decade”) which, while not as bad as it could have been, never comes close to living up to the billing and, as such, is a rather ominous start to the collection. All fears are allayed however, when the next match comes around, Sting v Muta, and the quality increases incredibly quickly.

There will be something for everyone on the set, with technical wrestling, brawling, blood, stipulations, megastars and cruiserweights all covered and given an airing.

On a different note, even the links between the matches (done by either Jim Ross, Dusty Rhodes, Tully Blanchard, Animal and “Mean” Gene Okerlund) are worth watching, particularly when Dusty is the one doing the linking (he is, as you can imagine, hilarious).

Yet another brilliant collection from WWE (following on from the recent IC Title, Ric Flair, Mr. Perfect, Shawn Michaels and Eddie Guerrero DVD sets) that chronicles a series of 25 matches; none of which took place under the WWE banner and feature talents that have never set foot inside a WWE ring.

The original commentary is on all the matches (two have alternates available), so you get to hear guys like Jim Ross, Jim Cornette, Dusty Rhodes, Bobby Heenan, Jesse Ventura, Eric Bischoff, Tony Schiavone and many more do their thing over the years. Also, in regards to the visual side of things, the production values and video quality, even from the early years, is of a great standard.

The selection of matches cover 17yrs of wrestling action with many various styles of wrestling on show. Highlights, for me, are the title match between Harley Race (the only white man who could get away with an afro AND massive mutton chops) and Ric Flair, the stunningly brutal, and infamous, “I Quit” match where Magnum T.A. and Tully Blanchard bled and brawled like it was their last match. Sting v Hogan from 1997 is an incredibly heated match (with exception of the botched finish), but more could have been done with the angle that set it up.

It’s also great that midcarders also get a chance to shine, with Eddie Guerrero v Dean Malenko, Rey v Liger, Eddie v Otani and the innovative Ladder Match that really let the fantastic 3 Count/Jung Dragons feud take centre stage on a major PPV. There really isn’t a bad match across the entire set (Hogan/Piper is the worst match on show, but even that has its good points).

For someone like myself, who hadn’t seen the majority of the matches shown here, this is an essential collection and a great history lesson for the younger fans. It lets you see guys like Ric Flair, Harley Race, Scott Steiner, Sting, etc, in their primes and gives an insight into why these guys are as revered as they are. As for the fans who were watching back in the day and have memories of these contests, this collection allows them to have a set of great matches in one place.

Oh, and you also learn that Dusty Rhodes, from the man himself, was never a cruiserweight. It’s titbits like this that makes you glad Dusty is allowed near a microphone.

I can’t recommend this collection enough, for fans of NWA/WCW, it’s a nice reminder of what is missing from today’s product, while for the rest, this is a great insight into why this era is praised so highly and why guys like Tully Blanchard deserve more credit than they are generally given.