WCW/NWO Revenge is probably the best WCW game going around. THQ was hit and miss with WCW, but this one was a definite hit, for those lucky WCW fans. With WCW been and gone, I guess you could look at this as a classic review…Unless you think Eric Bischoff will turn Raw into Nitro. Pointless comments aside, let’s jump straight into it… 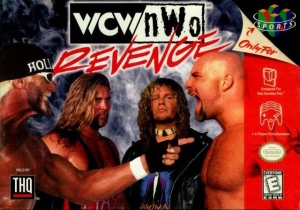 If you’re familiar with the AKI N64 style of graphics, you’ll notice the blockyness of the wrestlers. Even although blocky, one thing the makers do triumph at is the 4 separate costumes for each wrestler. Also on the plus side, you can make out who the wrestlers are, compared to certain other WCW game under the THQ banner. The ring seems to be fine and the arena look pretty good. The crowd could be better, but it’s your typical paper crowd, which seems to pop up in most games, although in my entire life I’ve never seen a cardboard cut out crowd, apart from at XWF shows. Other than the blocky problem, and the cardboard cutout crowd of doom, I don’t seem to see any other flaw in the graphics, so it gains a 7. 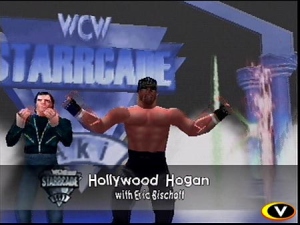 This department is probably were the game fails the most. On the bright side, we don’t have to endure Michael Cole and Tazz, on the downside, they only put in about 3 generic themes to share between every wrestler in the game. Not one wrestling theme here, with all the stuff thrown together, although the makers did start with the themes when it jumped ship to WWF. Not much to say about music, typical generic rock during matches, typical generic rock during entrances, typical bang and thuds during slams.

The parts in which the game failed, it starts to pick up in its Championship Mode. I’ve always found it interesting AKI has always found a different main game mode, in every game they’ve made. In this mode, you pick a title, pick a wrestler and badda-bing, you chase the title, in the form of a gauntlet. Another interesting thing in this game, which they took out in the future games, was the scoring system. I don’t know why they did take it out, as I found it fun with everyone trying to beat each other’s top score. Also to help keep you playing this game for a while is the huge roster, practically everyone who was in WCW at the time was in this game, and AKI added their own creation too, including the fame AKI Man, and a Dr. Death move-set and costume alike, Jekel. All the feature of this game will keep you playing for a while. 8

Not so much a CAW in this game as a Change a Costume mode. In this mode you can change the rosters: Name/Nick Name/Costume/Costume Colour. That’s all there is. 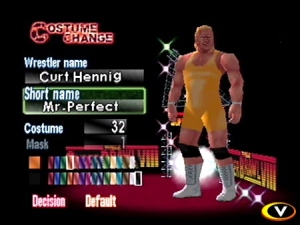 The game play works a lot slower in this game, and you have to build up your spirit bar to gain a finisher, also the game plays slow(Not for Smackdown Game fans) and not the very speeded up way of Smackdown, which I like, because I find it more realistic. In this game weapons actually do damage, like in real wrestling (Smackdown makers should of really took notes from this game).  All in all the game plays very realistically (talk about beating a dead horse). As far as the wrestlers move sets go, it’s a bit hard to tell, mostly brawlers have a brawler move-set, power guys have a power move-set, technical guys have a technical move set, and cruisers have a crusier move-set…with a few changes though to give each wrestler a personal feel. All finishers seem to be present, which is always a plus, and there’s some moves which looked quite good which were deleted from future games, my personal favorite being Piper’s Eye Poke of Doom. An interesting thing they’ve done is have managers bring your wrestler out, but aren’t able to choose from on the main screen, although you can control them if you plug the controller in ports 3 or 4. The one manager available to choose from, is Eric Bischoff, and even then, he doesn’t have grappling moves, although he does have lethal kicks. You can still tell they all have a basic move-set, so it gains a wonderful 7½. 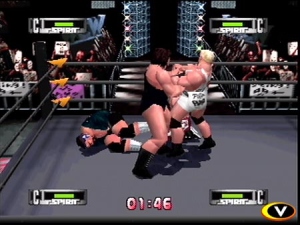 Game is recommended, although it does contain a few flaws, which are sometimes noticeable. This game is probably for the No Mercy fan, with a WCW fan inside them. Although I still enjoyed playing it again, it is not for the die-hard Smackdown fans. Recommended for people looking for a good WCW game.