The History of the Intercontinental Championship Review

Like the last title collection released by WWE, ‘The History of the WWE Championship’, this set chronicles the lineage of the titular championship from its inception to the current era. This set ends with Jericho winning his eight IC Title from Jeff Hardy, but, due to deadlines, misses the subsequent reigns of Kofi Kingston, Santino Marella (unfortunately, along with it, the glory of the Honk-a-Meter) and current champion, William Regal. 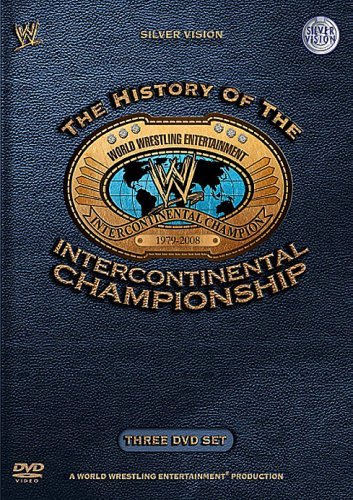 Unusually, for a WWE release, the company decided to leave the selected match listings up to the WWE fans, who logged on to WWE.COM and selected their favourite matches from the three decades featured on the three discs. This voting wasn’t open to all IC matches from the respective periods, however, as can be seen by the lack of Chris Benoit (and the frankly superb Triple Threat from Wrestlemania XVI).

The bouts that were chosen, though, are mostly good to fantastic, with some of the older matches holding up well to this day.

Todd Grisham is your host (good or bad?) and it is he who links the matches together with a brief history of why they are happening and the champions who held the belt between them. Even Ken Shamrock gets a quick flash on the screen holding the belt.

Another surprise is the lack of burial on both Jeff Jarrett (who features in two good matches) and Chyna. With neither of them leaving on good terms (there’s an understatement), it would have been easy to have a few digs at either of them.

There is no talking-heads segments or any actual documentary-style content on the history of the Intercontinental Title or what it meant to the guys who held it (many of whom still either work for WWE or are on good enough terms to provide a comment for the DVD). All you get is Todd and a match, followed by Todd and match, which is disappointing, especially when you think that there could at least have been some extras to add in even a few comments from the wrestlers who used the IC title to launch them to bigger things (HBK, Triple H, Austin, Rock at a push).

Some of my favourite IC matches are also missing (Bret v Piper at WMVIII, HBK v JJ at IYH2 and Foley v Orton at Backlash to name a few). I can understand why there are only a select few on the discs, but it’s still annoying when your favourites are omitted (I’m sure every reader of this review has at least one match they would like to have on the set been overlooked).

On the plus side, I did get to view a lot of matches I hadn’t seen before (around half of the first disc) or had forgotten how good they were (Austin/Rock, X-Pac/Eddie/Y2J, Triple H/Rock), not to mention some classics that I would never tire of watching again and again (Bret/Bulldog, Rude/Warrior, Flair/HHH). So, with that in mind, it’s easy to forgive the omitted bouts.

The video quality on the older bouts is of a great standard and all the original commentary is included, which adds a hell of a lot to the experience. Jesse Ventura, Bobby Heenan, Roddy Piper, Vince McMahon and Gorilla Monsoon are as important to the feel of the match as the wrestlers themselves.

Twenty-seven matches spanning almost thirty years is a lot of ground to cover. All the matches, as I said above, are at least good (most are great), but it does show the decline in importance of the Intercontinental Championship over the last five-to-seven years.

My favourite matches on the three discs are:

“The Magnificent” Muraco v “Superfly” Jimmy Snuka: I’d wager that every WWE fan knows that this is the match where Snuka splashes Don Muraco from the top of the cage (an amazing site, even in 2008). What most fans won’t know is that the splash is only part of the story. These two men engage in a stunning, and bloody, brawl that deserves to be known for more than the one big spot.

Rick Rude v The Ultimate Warrior: Rude was one of only a handful of men who managed to get a decent match out of Warrior outside of a squash-match situation. He was also the first man to pin The Ultimate Warrior at Wrestlemania V. This led to a rematch at Summerslam where the fans didn’t know if Warrior would lose again. The bout is a brilliant carry-job from Rick Rude and is a testament to the man’s talent and willingness to bump like there’s no tomorrow.

Mr. Perfect v Bret Hart: The feud between Bret Hart and Mr. Perfect was the first real rivalry over the title I can remember watching at the time it was happening. It was also, in my opinion, the high-point for the title itself. The match, a wrestling classic if ever there was one, is a brilliantly paced bout between two guys who just clicked in the ring. The fact Curt Hennig worked with a severe back injury makes it all the more impressive.

Razor Ramon v Jeff Jarrett: Probably not the most obvious choice, but this really is an underrated gem of a contest. Razor was established and Double J was on his way to doing the same. With The Roadie by his side, it seemed that destiny was also. The match manages to keep both men super-strong going out and the finish is a work of heel-genius.

Steve Austin v The Rock: My favourite match between these two is their Wrestlemania XIX encounter, but this match is pretty much forgotten about (which Grisham actually alludes to in his link), which is a shame. This is the match where Austin brings a pick-up truck to the ring and proceeds to backdrop D-Lo Brown over the top rope into the windscreen before landing a Stunner to the first Euro-Continental Champion (yes, Kurt Angle, he does count) on the roof of the vehicle.

Rob Van Dam v Jeff Hardy: These two had such great chemistry together, I can’t actually think of a bad match between the two of them (their first ever meeting at Invasion is still one of the best matches RVD has had in WWE). This was to unify the European and Intercontinental titles (which would also be unified with the Hardcore Championship) and as it was contested under Ladder Match rules, you can guess the rest.

Ric Flair v Triple H: A good, old-fashioned, steel-cage match contested by two guys who know each other very well and carried that into a very emotional and very bloody contest. This is, without a doubt, the highlight of the Taboo Tuesday/Cyber Sunday events.

Umaga v Jeff Hardy: Like Jeff and RVD, Umaga and Hardy just have a chemistry between them that heralds great matches. This is no different and has one of the best finishing sequences you’ll see. Umaga, feeling that Jeff may actually beat him, simply goes on a rampage. A superkick, a bum-bash avalanche and a Samoan Spike are delivered with nary a breath between them.

The other matches on the discs are also good value, but the lack of any real substance or input from any wrestler past or present is a real dampener. Buy it for the matches, but don’t expect anything else. At around 9hrs worth of content, though, you do get a lot for your money.