First things first, I have never seen the previous Ric Flair DVD collection, so this will NOT be compared with that set and will be reviewed on its own merits only. 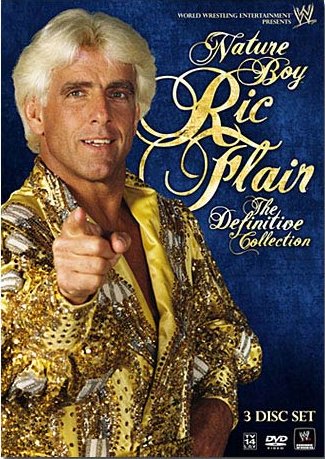 This 3-Disc set is a prime example of how to do a profile DVD the right way; one disc devoted to the subject’s life and career and the other disc(s) filled with matches and promos (the upcoming Mr. Perfect 2-Disc set follows this layout). Compare this to some of the other releases (Tombstone, I’m looking at you) and you’ll see what I’m getting at. A profile DVD should let you get behind the character and see how the wrestler got where they are and tell an interesting story, which is why having the matches on separate discs is a Godsend.

The first disc, the documentary section, begins by profiling (quickly) Flair’s beginnings and fills us in on how he doesn’t know his actual birthday, his real parents or what his real name is. It’s very humbling and may go some way to explain why Ric Flair behaved the way he did when the money started to roll in.

From there, we move on to Naitch, through Ken Patera and Verne Gagne, breaking into the business (as a power-wrestler with a body-builder physique, if you can believe that) and then breaking his back, in three places, after a nasty plane crash that also involved Jimmy Valentine and Mr. Wrestling I.

The doctors told him that he would be lucky to walk again, but that he would definitely never wrestle again. As this was October of 1975, you don’t need me to tell you that the doctors were wrong. In fact, Ric was back in the ring six-months later (eat that, John Cena) to feud with Wahoo McDaniel. The one thing the crash did do though, was make Flair change his in-ring style to what we would see for the next thirty years.

With a career as long as Ric Flair’s, it’s understandable that certain parts would be rushed through or missed out entirely, but we do get to find out why he took on the “Nature Boy” moniker, what the NWA Champion meant to the business (in regards to travelling from state to state and from town to town, to build up the local fed’s top guy, etc) and the formation of probably the greatest group in the history of professional wrestling; The Four Horsemen.

The Horsemen, despite being the majority of Flair’s top-line career, are pretty much glossed over quickly, which, while understandable with the group having their own DVD set out there, is frustrating because of how important the group are to both Ric Flair and pro-wrestling as a whole.

Three of his greatest feuds are chronicled next as we see him make Sting a superstar, have a series of wrestling clinics with Ricky Steamboat (especially the final match at Wrestle War ’89 – a match considered by many as the greatest wrestling match of all time) and then, in my opinion, the best of the lot, Terry Funk (who was at ringside as a judge for the aforementioned Wrestle War match) attacking Ric and piledriving him on top of a table. This led to a fantastic feud (filled with excellent promos from both men), including a belter of an “I Quit” match.

The rest of his run in WCW is covered in minor detail (including the time he was asked to change his gimmick by shaving his head, wearing a single earring and becoming “Sparticus”) before Flair shocked the world and turned in the WWF… still with the WCW World Title Belt.

“The Real World’s Champion” had arrived in McMahon-Land with the big belt in tow; making a mockery of Vince’s main reason for committing the Montreal Screw-Job. That’s right, the very man who cried that Eric Bischoff may parade the WWF Championship on Nitro had Ric Flair come to the WWF and parade the WCW Championship on his television shows (this was later changed to a pixellated view as WCW had the belt back and Vince was reduced to using an old WWF Tag Title belt in its place).

Flair has gone on record as saying that his first sojourn “up North” was the greatest time of his career and that he never enjoyed himself as much as he did over that eighteen-month period. It’s not hard to understand why; pushed into a feud with Hulk Hogan straight away (and made to appear on the same level as Hogan too), given a sterling rivalry with Randy Savage, Heenan and Perfect as his ringside seconds, the honour of winning (perhaps?) the greatest Royal Rumble in history and main-eventing his one and only (at the time) Wrestlemania appearance. The only downside is that the Hogan angle never went anywhere and would have to wait until both men were in WCW.

After trading the WWF Title with Randy Savage, we touch on his losing of the belt to Bret Hart in an untelevised match before chronicling his “Loser Leaves the WWF” match with Mr. Perfect (a fantastic bout that showed the right way to leave a territory). After that, it’s back to WCW and more titles as Flair wins the WCW Championship from Vader (in a great bout), unifies that with the WCW International Title in match with Sting and then, finally, goes on to feud with Hogan (losing the title to The Hulkster in Hogan’s first WCW match).

Pretty much all of Flair’s second WCW run was a disaster for him, and you can tell from the way he talks about it, that he absolutely hated the place and was seriously overjoyed to see the company close its doors (but distraught that people were going to be unemployed).

His second WWE run, after being off-screen from March until November 2001, was much more successful for “The Man”. Coming in as co-owner of WWE (after being revealed as the person who purchased Shane & Stephanie’s stock in the company as part of The Invasion storyline), Flair assumed that his wrestling days were behind him… he was wrong.

This led to a good match at the 2002 Royal Rumble between Vince and Flair, but Ric wasn’t convinced he had it in him to become an active performer again. It took Undertaker hand-picking Naitch to be his opponent at Wrestlemania X8 to get his mind straight… and the match was a fantastic contest (including an awesome Arn Anderson run-in) that firmly put Flair back on the wrestling map (even though he lost the match, letting Undertaker go 10-0 and the big dance).

The documentary then skips over a few things and takes us to the formation of The Four Horsemen 2.0; Evolution. Joining forces with Triple H (who openly idolised the man), Randy Orton and (eventually) Batista, the group was a revelation and dominated the red brand until they started to implode after Summerslam 2004.

Things fast-forward quickly once again as we find ourselves caught up in the hype of the Wrestlemania XXIV weekend that includes both the Hall of Fame ceremony and perhaps the most emotional match of this generation – Shawn Michaels v Ric Flair.

The disc ends with many stories from Flair’s past, some of them sad, most of them funny, all of them “Ric Flair-worthy”, before a music highlight video brings the documentary to a close.

The remaining two discs are jam-packed with stunning contests from all across Flair’s career (26yrs pass between the first match and the last match on the discs). The highlight matches are against Sting, Harley Race, Terry Funk, Ricky Steamboat and, in his final match (for now?) against HBK. The other matches are good to great as well, but these five really stand out for me.

The extras are mostly promos from Flair’s early days and are well worth a listen to see and hear the man in his prime. The other extra is the Farewell Address from the RAW following Ric’s loss at Wrestlemania XXIV. This was great first time around and is still a thrill the second time around as all the old faces bring back the memories. The highlight of  Flair’s “last night” on RAW is after the television show has gone off  the air and Undertaker and Vince come out to pay their respects.

If you’ve ever wondered what all the fuss about Ric Flair is about, then this will go a long way to convincing you. It’s a fantastic DVD collection (despite the omissions) and one that every wrestling fan should own. Unlike The Rock’s latest release, you get a great documentary and fantastic insight from a host of “talking heads” like Harley Race, David Flair, Gagne, Steamboat, Vince, HHH, etc, instead of just a ream of matches and no real insight into the man behind the persona.

The documentary is brilliant and the matches are top-drawer, so it’s well worth the money to own this collection. Is it definitive? Not even close. Does it matter? Not a jot.

Go and get this if you haven’t already got it in your collection.