The Life and Times of Mr. Perfect DVD Review

“Mr. Perfect” Curt Hennig was one of my favourite performers when I first started watching wrestling back almost twenty years ago. With that in mind, you could imagine how much joy I felt when I found out I would be reviewing this two-disc retrospective of the man’s life and career. A lot, as is the case with those wrestlers who enjoyed long careers, is missing, but what is here is a pleasure. 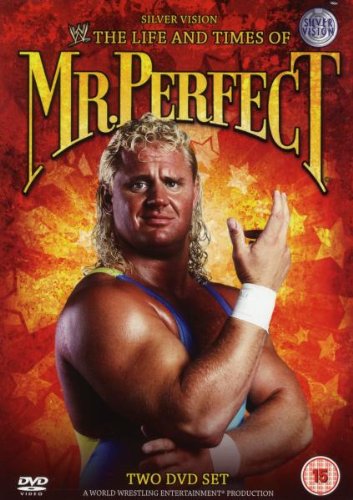 The documentary that takes up the majority of Disc 1 begins by looking at the baby Curt and his childhood as the son of a famous wrestler. From there, we follow the young Hennig as he becomes a successful amateur wrestler and football player before deciding that, like his dad, he was going to be a professional wrestler.

After breaking the news to his future wife (and childhood sweetheart), his father helps him get to the AWA through the very harsh training regime of Verne Gagne, where he becomes a major star for the promotion, first by teaming with “The Coyote” Scott Hall (if you think the former Razor Ramon looks bad now, you haven’t seen anything until you’ve seen him here. He looks like a guy who couldn’t decide whether he wanted to dress up as a cowboy or Magnum PI for Halloween… so went for both) and eventually winning the AWA World Tag Titles and then moving back to singles, after a short run for the WWF between 1982-1984, for a series of matches against Nick Bockwinkel for the AWA World Heavyweight title.

Many fans probably think that second-generation wrestlers are a modern phenomenon, but that isn’t the case here. Curt, during his AWA run, had a long feud with Greg Gagne (Verne’s son) that eventually encompassed the fathers as well (apparently, the dads really didn’t like each other in real life). You can tell that, even though he is proud of the matches, Greg does seem bitter about Curt being able to escape Larry’s shadow when he couldn’t escape his own father’s.

After the AWA title loss, Curt went back to the WWF, but this time he would be as the persona he will always be remembered as; Mr. Perfect.

The DVD shows us the many vignettes that were shot to hype his return/debut as Mr. Perfect, and showed him in all manner of sporting situations doing many impressive things. The best part of this is a sit-down with Bruce Pritchard (who produced all the vignettes) telling us about the times Curt fluffed the situations and how they got around it. I don’t want to spoil this part for those still to see the DVD, but the “behind-the-scenes” footage is hilarious.

With all the hype done, it was time to live up to it… and boy, did Curt Hennig ever live up to it between the ropes. His early matches with Bret Hart were stunning (especially for the time period), as were his bouts against the rest of the roster. All of which led up to the tournament in April 1990 to determine a new Intercontinental Champion (The Ultimate Warrior vacated the title after winning the WWF Championship at Wrestlemania VI).

A lot of people, me included, despair at the stature the IC Title has in today’s environment, but back then, it was a huge deal to reach that level, particularly when it was widely recognised that the Intercontinental Champion was the best “wrestler” in the company at that time.

Perfect had two stints with the belt and both were, pun fully intended, perfect. His first was cut short due to a loss to The Texas Tornado (not really discussed on the disc) and the second was ended in what many people consider as one of the best wrestling matches of all time – Mr. Perfect v Bret Hart from Summerslam 1991. Bret, in footage from his own DVD, discusses the matches the two had competed in over the years and tries really hard not to make it just about him.

The DVD discusses what Mr. Perfect meant to the Intercontinental Championship and how the belt probably never had more prestige than when it was around the man’s waist… and the segues into a quick section on how much of a practical joker Hennig was backstage.

There was more bad news to go with the loss of the IC title; Mr. Perfect’s back was in serious need of repair, so the man with the best dropkick in wrestling had to hang up the tights. So what does the best wrestler in the business do at that point? He becomes the best colour commentator in the business instead. The documentary covers his run alongside both Vince McMahon and Jim Ross and highlights how good a commentator the man actually was. It also shows, even back then, that Vince wouldn’t tolerate imperfection from his announcers as his expectations of the man dubbed Mr. Perfect are explained (and shown during one exchange).

A rather huge omission on the disc is his return to the ring at Survivor Series 1992 as the partner of Randy Savage to take on Ric Flair and Razor Ramon. There is no mention of the weeks long angle that saw Savage try to coax Curt back into the ring or the fantastic sight of Mr. Perfect accepting, Heenan slapping him and then Hennig pouring a jug of water over his head.

There is also no mention of the “Loser Leaves the WWF” match he had against Ric Flair in January 1993 (I didn’t expect the match itself to be on here as it is on other releases). Instead it jumps straight to his switch to WCW in 1997. This run is pretty much glossed over (unsurprisingly) with Bischoff talking about how he wanted to avoid booking Curt as “Mr. Perfect without the name” and tried to market him differently (which, to me, is not how it came across at the time).

The fact his WCW run is pretty much omitted is a shame as there was some good stuff in there. His debut is fleetingly touched upon, as his recruitment and subsequent turn on The Four Horsemen and his joining of the nWo. The Horsemen/nWo situation deserved better as it was a major angle at the time (including the great parody starring Nash and Syxx as Arn and Flair respectively).

It is these gaps that cause the collection to fall short of perfection (how can you not use a “perfect” pun in this situation?). Even his second run in WWE is pretty much glossed over despite the fact there were some good-to-great matches during that tenure. Not so surprisingly, his dismissal from WWE (over the “plane ride from hell” incident”) and short run in NWA: TNA are not mentioned either. The West Texas Rednecks do get a mention though, so it’s not all bad.

Things do take a dark turn, however, when we reach February 10th, 2003; the day Curt Hennig passed away from a cocaine overdose (the cause of death is hinted at, but not outright mentioned, on the DVD). You can visibly see the pain in the face of Curt’s father, wife and son when they talk about him not being around anymore. Probably the most distressing is Wade Boggs (one of Curt’s best friends, even from before they did the WWF vignettes together), who blames himself for not being there for his friend (Hennig died in Florida, where Boggs lived, yet they didn’t get in touch with each other). A lot of “what ifs?” are raised in the aftermath of Curt’s death, especially in regards to WWE releasing him from his contract. What if they didn’t? Would he still be alive today? It’s an unfair question because he deserved to be released from his contract due to his behaviour, but it still makes you wonder.

The documentary portion of the DVD concludes with a look at Mr. Perfect’s Hall of Fame induction and then a quick word with Harley Race on how Joe Hennig (Curt’s son) is getting along as he trains for a career in the sport (Hennig has now signed on as a developmental wrestler and his sister, Amy, is training to be a wrestler as well).

The last words on the DVD belong to Curt’s peers as they discuss Hennig’s talent and legacy to the business. Everyone says that he was the best in-ring performer of the modern era and that it was a joy to work with him. Hulk Hogan probably said it best…

“Everybody would check their ego’s at the door in the locker room if Mr Perfect was in there because the fact is, you couldn’t out perform him and you couldn’t out shine him, he was the best of the best.”

The extras on the first disc are pretty good, with two good matches, his HoF induction and, best of all, the “Rap is Crap” music video. Also on the first disc are all the “Perfect Vignettes” (which I think would suit a character like Jack Swagger today) and two stories about the man behind the persona.

On the second disc is the fantastic hour-long draw between Curt and Nick Bockwinkel that leaves both men bleeding profusely, three Bret Hart matches (one from his pre-IC days, a WCW encounter and the MSG classic) and two underrated matches against Hulk Hogan and Shawn Michaels.

The lack of WCW matches is a shame, but the Uncensored bout against perennial foe, Bret Hart, is a great one to pick if only a lone match was allowed.

My only real gripe is the lack of WWE matches from his last run, as he had some good bouts against Steve Austin, Val Venis, Tazz, Kane and Rob Van Dam.

Any collection on a man known around the world as Mr. Perfect was always going to have a lot to live up to. For the most part, this collection does just that. It’s only the glaring omissions that bring it down, especially the lack of WCW content.

The documentary is excellent (as all WWE-produced docs are) and the talking heads are, pretty much, worthwhile entries (some don’t like him, but I’d feel lost if Steve Lombardi wasn’t one of them). Getting comments from Bobby Heenan was a coup, as the man is always a delight when he’s on the screen.

The matches on the extras are all good-to-great quality and encompass almost all aspects of his career (I would have liked to have seen more from his four-month 2002 stint in WWE). The sixty-minute draw against Nick Bockwinkel is awesome and you can never see the Summerslam 1991 encounter enough times.

All in all, a great release from WWE and another example of how a documentary release should be done. Is it perfect? No… but its subject was as close as you could ever get.