For decades, WWE Superstars have sworn allegiances at Survivor Series, confronted the chaos of the Royal Rumble and braved the harsh steel cage of Hell in a Cell. But before all this, there was only one match designed to wreak the ultimate havoc on all who dared to enter: WCW’s most infamous innovation – WAR GAMES! Now, for the first time, own all the greatest battles from inside this multi-caged combat zone.

The mind behind the mayhem, WWE Hall of Famer Dusty Rhodes, takes you inside his most famous creation, presenting punishing matches featuring Rick Flair and The Four Horsemen, Sting, The n.W.o., Chris Benoit, Lex Luger, The Road Warriors and many more! 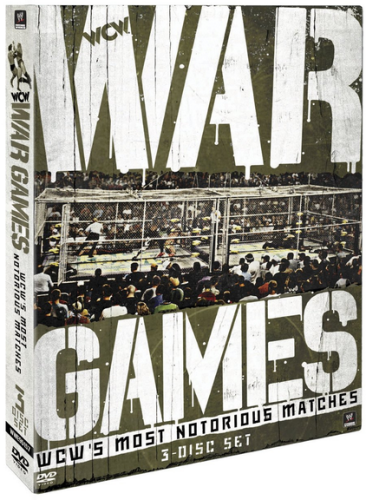 For many, the War Games Match is the greatest gimmick match in wrestling history. For a lot of younger fans, they may have no idea what a War Games Match actually is, while for a lot of older fans, it’s a shame that WWE has not brought the gimmick back.

This set is a chronicled history, linked by “The Dweem” Dusty Rhodes, of all the War Games bouts that took place in the NWA and WCW from 1987 until 2000. The players may change, but the ominous steel structure did not and the name of the game was simple; inflict pain on your opponents until all members of the teams were officially in the match… and then inflict pain until someone gave up.

As a concept for blowing off a feud, it’s nothing but pure, unadulterated genius. Especially when it revolved around a faction (such as The Four Horsemen) having a group of guys they’ve been targeting team up to take them out. Another common factor in most of the War Games matches is blood. These fights (and they were never booked as wrestling matches, they were booked as fights) were nasty, violent and bloody affairs. Most of the men involved would bleed heavily and really earned respect for their efforts.

There are similar spots (it’s a cage match. People are going to get thrown into the cage head-first; what are you going to do?) and some wrestlers make multiple appearances (Arn Anderson, Ric Flair, Dusty Rhodes and Sting are prime culprits), but the action is frenetic, violent and the fans are so into it, especially in the older ones, that you can watch them back-to-back with no issues at all.

Some of the video quality in the first few matches is shoddy at best, but there’s not really much anyone can do about it and in a way it adds to the charm. Another negative is that you don’t hear from any of the guys involved except Dusty Rhodes and a chance to catch up with the men who elevated the match to mythical status deserve to be heard.

With there being no extras on the DVD set, this could easily have been filled with a few talking-head segments from wrestlers involved, wrestlers who missed out first time (such as Triple H) who would love to bring it back and it would be awesome to get Vince McMahon’s true feelings on the match too.

Despite the lack of extras, this is a great collection of matches that deserve to be seen by those who were too young to witness them the first time around or only found wrestling after the demise of WCW. Each match offers something, even if it is unintentional comedy to go along with the violence, and in the PG-era we find ourselves in now, the blood and carnage really stand out as a bygone era we may never see again.

Points: 9/10 (this would have scored a full 10/10 if there was more input from other wrestlers)