When you hear the name Vince Russo, what do you think? There’s probably a good chance that you think of a writer who killed WCW with his booking. The man is notorious among the wrestling community as the man who brutalized WCW with his booking and is now doing the same to TNA. To be fair, the notion that he killed WCW is more accurate than the beginning of the book where “Vince Russo; The first man to actually make men in tights appealing” is written. I’m pretty sure that you can gather from the monolithic title of ‘Rope Opera: How WCW Killed Vince Russo’ that this book is spent trying to argue against the commonly held belief that Russo was to blame for WCW destruction rather, it was WCW that killed Vince Russo. 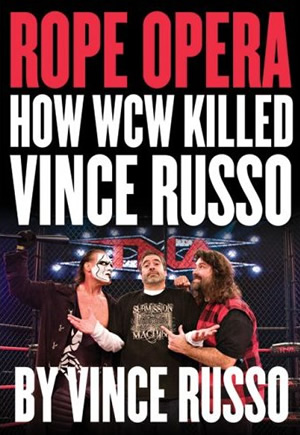 Rope Opera starts with a reference to a movie called Avalon which becomes something of a recurring theme in the book. Russo uses the comparison to explain someone finding or remembering a moment when their life was the happiest (Avalon is about a family of Eastern European immigrants living the United States and how their lives change, examining the break-up of the traditional family). The references don’t end there with Russo making references to pop culture or television shows every chance he gets, so he started as he meant to go on.  At one point he compares Brad Pitt to the Golden Calf of Exodus. That’s right he compares Brad Pitt, loveable Hollywood actor and producer to a pagan idol that resulted in the deaths of thousands of idolaters in the Bible. At least he slows down on references like this around the half way point and seeing as how nobody ever said making references to pop culture was a bad way to write a book I can’t exactly fault him for doing so. The book itself is well written – Russo really does make the effort to connect with the reader when he’s not chastising them.

Russo throws chronology out the window because he wants us to read the entire book, criticising us because he believes that all we want to read is the “rasslin’”. As far as I can tell Russo is talking about 1997-2009 but with how he jumps around and omits years altogether it’s hard to be sure. It’s just poor writing to admonish the person you sold the book to, what’s stopping them from getting up and returning the book to the store?  He constantly takes the stance that writers have to “know their audience” only for him to rebuke the audience for not being able to understand what he was trying to do in WCW. I was hoping that he would spend time talking about TNA behind the scenes but whenever he does mention TNA it’s either about his relationship with Jeff Jarrett or how great it is. You’d think a book with a picture of Vince Russo standing in a TNA ring, in between two TNA wrestlers with a TNA logo would include something of note from said promotion.

His previous monolithically titled book, ‘Forgiven: One Man’s Journey from Self-Glorification to Sanctification’ was a book that I was never really able to get into, which hampered me somewhat because Rope Opera makes the assumption you’ve read ‘Forgiven’. The content was moderately interesting but Russo made the bewildering decision to write the book and then go back and every few paragraphs inject a paragraph that was written by the religious man inside of him. More often than not took back everything he had just written about either saying he was sorry, he’d do it differently now or something not even remotely related to what he had just written. Okay Vince,
you got your message about faith across but surely you could have picked a better format then something that’s reads like you have multiple personality disorder? He’s getting better though, now those random religious bouts have their own chapters. But even then they get so random that there are chapters that don’t seem to have any connection to the story he is telling or anything at all really.

The message of faith that Russo gets across does deserve some close examination. He really does pack this stuff in, like he has made it his mission to save wrestling fans and direct them to God. His original idea for his first novel was intended to be called “Welcome to Bizzaroland” and was meant to air all the dirty laundry of the wrestlers Vince Russo has dealt with over the years. While I took that with a grain of salt considering this is Vince Russo we’re talking about, his original idea seemed to be a book I’d be much happier reading.  But because he found peace with himself he refuses to publish it, assuming it ever existed. I obviously can’t blame a man for finding personal salvation, but it does get tedious at times hearing him talking about how he found enlightenment. If I want a book about spirituality I’d get one, I read wrestling books because I want to read about wrestling, something which Russo seems to resent me or any other reader for.

Russo does make a case for how he’s not to blame for WCW’s demise and well, yes he is right. If you boil it down it was ultimately the Time Warner executives that passed on letting WCW continue. But if it was some guy in the corporate office that killed WCW then Vince Russo was the man who was rubbing handfuls of salt in to the wounds of the beaten and mistreated product. A prime example of this is Russo defending his original idea to put the WCW World Title on Tank Abbott of all people at the infamous Souled Out PPV. He claims that considering people want “realism” in wrestling that the most logical thing to do would have been to give the title to Tank Abbott, a MMA fighter who couldn’t do anything in the ring but knock his opponents out. Russo just does still not get that titles in wrestling are important. One needs a goal in wrestling, something to strive for. It’s a simple concept that has existed for almost a hundred years that Russo resents. He laughs at the idea of a World Champion constantly carrying around their world title, citing that you wouldn’t see a boxer carrying his world title. The very glaring truth that wrestling isn’t like other sports seems lost on Russo when it comes to this matter.

At the end of the day, Rope Opera is everything you would expect from a book written by Vince Russo that is titled “How WCW Killed Vince Russo”. If you know nothing about Russo or the demise of WCW then you will very easily fall for believing everything Russo says as he does paint a very sympathetic picture of himself. But for anyone who was around during that era, then nothing in here will be news to you and you’ll see it for what it is. If you want to wade through the ignorance and verbose messages about faith then there is a story about wrestling in here but as a whole the book really isn’t that good.