The Rise and Fall of WCW DVD Review

The first thing that went through my mind when this retrospective look at WCW was originally announced was how great a job WWE had done with The Rise & Fall of ECW. If they could put out such a polished and well-researched look back at a small-time promotion that reached heights no-one ever thought it could, just imagine what they could do with a promotion going back decades. The sad fact is that The Rise & Fall of WCW falls way, way, way short of its ECW equivalent… and that’s a crying shame. 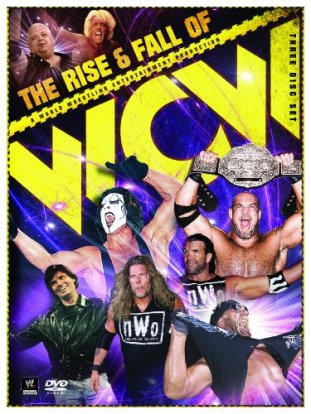 It starts off with a look back at the origins of the company under the Jim Crockett Promotions banner before running us through the changes leading up to Black Saturday; the day that Vince McMahon and WWE took over Georgia Championship Wrestling’s television show on Ted Turner’s network, a weekly programme called World Championship Wrestling. It was a dark day for wrestling fans in the south, who were used to the more athletic and technical wrestling provided by GCW than the larger-than-life characters and style of wrestling promoted by Vince McMahon.

As is the case with any time-restrained documentary covering events over a period of decades, certain things have to be overlooked and/or rushed, but even keeping that in mind, the series of events that led to Crockett selling his company to Ted Turner don’t seem to be have given the time they deserve.

That it gets worse when we cover after Turner takes control is what really lets this release down. We jump the six years from when the company became WCW to the hiring of Eric Bishoff as Executive Vice President with the events seemingly being given little more than lip service. Even the hiring of Hulk Hogan doesn’t really get as much attention as it should for such a ground-breaking moment in wrestling history.

The first disc moves on to the introduction of Nitro and, because Bischoff declined to be interviewed, we get rehashes of his contribution to the Monday Night Wars DVD instead. Again, a lot of the happenings on Nitro are glossed over (possibly due to it putting the current WWE, well RAW at least, to shame) and even the nWo, THE NEW WORLD ORDER, are only given a short segment. THE NEW WORLD ORDER! Due to it being the most successful gimmick in WCW history, due to it heralding in not only the most successful period in WCW’s history, but leading into the most successful period for pro-wrestling itself, the New World Order should have had much, much more.

Not only did they give Hogan and cronies the briefest of mentions, WWE failed to give the transformation of Sting, arguably the greatest update of a gimmick we’ve ever seen, leading into possibly the greatest long-term angle we’ve ever seen, leading into arguably the most anticipated match in WCW history we’ve ever seen, isn’t even mentioned at all. I was so annoyed that the 18mth period when Sting never said a word, never wrestled a match and basically only did run-ins was completely overlooked. For a collection called Rise & Fall, there seemed to be a lot of bias towards the latter while ignoring plenty of the former.

Two of the things that WCW did right were the cruiserweights and Bill Goldberg. The cruisers never got beyond mid-card status, but they were (and still are) considered an important cog in the machine for WCW’s ascension to the top. Usually the opening match on a card, they were used to create an atmosphere and get the crowd going, while also, for a fair amount of them, get their characters over (with the help of the announcers). Wrestlers like Rey Mysterio, Eddie Guerrero, Chavo Guerrero (with Pepe), Dean Malenko, La Parka, the Villianos, Chris Jericho, Alex Wright and Juventud Guerrera (among others) were allowed to showcase their abilities in an unrestricted environment… they were allowed to be different. That was, of course, until Vince Russo came in and started treating them like a joke, but we get to hear more about him later.

Goldberg, on the other hand, was a phenomenon, a once-in-a-generation happening that you can’t explain, you can’t predict and you can’t create with just anybody. He came in to WCW an unknown and simply plowed through everyone until the people took notice. From that point on, Goldberg was THE MAN to the WCW fanbase and all they wanted to see was the three minutes (sometimes less) that it took for Bill to destroy whoever was put in front of him. He was lined up against faces and heels (still a rarity, even in the anything goes Attitude Era), mowing them down with his Spear and Jackhammer… and the fans loved every second of it.

With Goldberg and everyone else in WCW seemingly unable to do anything wrong, the ratings went through the roof. Wrestling was the hippest event on the planet and everyone wanted involved. Celebrities started appearing on WCW programming, some worked (Kevin Greene and Karl Malone), others tanked (Jay f’n Leno), but the nadir, the celebrity appearance that to this day still puts people into an apoplectic rage is the time that David Arquette won the WCW World Heavyweight Championship. Arquette, to his credit, felt the idea was idiotic and donated his payments from WCW to charity, but the damage had been done.

All credibility the title had was gone, but before that happened in the chronological time-line (but afterwards on the DVD running order), the hottest crowd in WCW history are featured in the next segment as one of the greatest passings of the torch, with a great build and a supernova Goldberg battling Hulk Hogan for the title. The match was originally going to be a dark match for the fans in the arena only, with the televised version being kept for PPV, but with RAW having the advantage in the ratings, WCW decided to play the only ace they had left and promoted the bout from dark match status to Nitro main event. The ploy worked, WCW won that week’s ratings war, but cost themselves millions in guaranteed PPV revenue. Of course, virtually none of the importance is conveyed by the segment on the DVD, given that it only gets several minutes of not-very-in-depth discussion.

The remainder of WCW’s history is fast-tracked from the Hogan/Goldberg encounter through the Russo era and end up at the end, the night Vince McMahon announced he’d bought his competition. A little known fact about this purchase is that it was first mooted during the lawsuit WWE filed against WCW for their use of Scott Hall and how much of it was basically the Razor Ramon gimmick. The suit was settled out of court and one of the conditions of the settlement was that Vince McMahon would be allowed to buy the company’s assets should it go under. Again, this isn’t mentioned on the DVD.

The documentary ends with a look back on the legacy of WCW, but, for the viewers it ends with a feeling that this was an afterthought for WWE and something they did because they felt they should rather than because they wanted to.

If anything makes the collection worthwhile, it’s the matches on the second and third disc. Of course, there’s going to be a lot of bouts that don’t make the cut, for whatever reason, but those that are here are, for the most part, really, really good.

From the second disc, Ric Flair’s matches against Magnum T.A. and Ricky Steamboat are awesome, as are Sting’s two bouts against Vader and the late Rick Rude. The Stinger also teams up with long-time friend Lex Luger to take on The Steiner Brothers for the WCW Tag Team Championships and two of the greatest tag teams in history lock horns when The Midnight Express take on The Rock n Roll Express.

The third disc isn’t light on quality either. Flair v The Giant was alright, but the introduction of the cruiserweights really light a fire under the action. Rey v Malenko, Syxx v Eddie Guerrero (a vastly overlooked stunner),  Eddie v Malenko and Jericho v Juventud are all blinders and a brilliant showcase of how a smaller wrestler should be used. WWE should’ve been taking notes instead of liberties when putting this together.

Goldberg’s title defence against Diamond Dallas Page is an amazing match, not to mention a rare occasion when Bill had to go longer than five minutes. This match was part of the Halloween Havoc PPV, but the event overran, so those watching lost the feed. WCW, to their credit, aired the match in its entirety on the next edition of Nitro as an apology.

As much as the matches on the discs are worth watching, the fact Goldberg v Hogan, after it being singled out in the main feature, isn’t on there is a massive oversight. Hogan v Sting is also missing, as is the Bash at the Beach six-man that led to Hogan turning heel.

A good collection of matches, but a lot of better/more important ones are missing.

Not really much to see here. The extra on Goldberg is good and the story of Spam Man is hilarious, but you won’t watch them more than once.

For the “Lost in Cleveland” vignettes for Cactus Jack, actually having viewed them once is enough.

Vastly inferior to its ECW counterpart, this has some nice segments, but is far, far too much of a missed opportunity. The documentary rushes past too many major events in the WCW time-line that, for those who are unfamiliar with them, they seem unimportant in the grand scheme of things.

The feature picks up again after the introduction of Nitro, but again, there is so much missing that you become frustrated at what you perceive should be shown. Also, repeating segments from the Monday Night Wars DVD is a bit of a con, but at least voices are heard.

One of the great things that the Rise & Fall of ECW got right was that it detailed the important players and gave them time on the documentary to be showcased. No-one in WCW gets the same treatment, no-one in WCW is given time to be showcased and as a result, the overall feeling is one of “what could’ve been”.

There is so much missing from the archives; The Four Horsemen, Sting becoming Crow Sting, Bret Hart coming in, Harlem Heat, detailed account of the New World Order… I could, unlike the DVD, go on forever, but I’ll end by simply saying that the Rise & Fall of WCW isn’t a complete waste of money, but it IS a complete waste of an opportunity.

Points: 6/10 (two of those points are simply for the matches)