‘The American Dream’ Dusty Rhodes is the latest recipient of the now patented three-DVD disc tribute set that WWE have started rolling out quite frequently as of late. It follows the usual format. Disc one features a documentary on the life and times of the subject in question, as well as some key matches and promos, most of which are referenced or shown in clip form on the main documentary. Discs two and three are absolutely jam-packed with matches, promos and vignettes from the subject’s career. 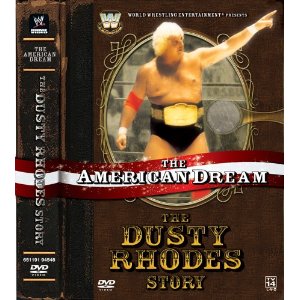 I will start this review by saying straight away that this DVD set is very entertaining. Even if you are a somewhat new-school fan, watching from a late-1990s onwards perspective, you will find some of the promos and vignettes very entertaining. As for the matches…well, let me just say that you’ll find the promos and vignettes very entertaining. Actually, that sarcasm is somewhat unkind. It was no secret – Dusty Rhodes was never a master of the five star (or even three star) match. But he could talk. He had immense charisma. In the days when arena attendance was more important than ratings and buyrates, he could talk people into buying a ticket and attending a show. In one respect, he was kind of a primitive version of John Cena in the late 1970s to the mid 1980s. Limited wrestling skills, but incredible charisma. Loved by many, but later on, loathed by the hardcores. And that’s partly what this DVD set shows.

This lasted around 80 minutes. It started off explaining his background, born Virgil Runnels and that he grew up in Austin, Texas, the son of a plumber. It explained how he and his dad were big baseball fans, particular of the New York Giants and their star batter, James ‘Dusty’ Rhodes, whom Runnels took his wrestling name from. It recounted his troubled college years, when he was thrown out of two universities and ended up at West Texas State, where he met the Funks, who got him into wrestling. It did a very good job explaining the territorial days of wrestling in the 1960s and 1970s, where guys worked in one area of the U.S. for a prolonged period of time, before moving on to another area (or ‘territory’) to face a fresh set of opponents. His first run in a heel tag team, the ‘Texas Outlaws’, with Dick Murdoch, was profiled. His subsequent split with him, and move to Florida, where he turned babyface and became the ‘American Dream’ was recounted. His rocketing popularity across the country, and his unbelievable charisma was showcased through many promo and vignette packages. The first 40 minutes of this documentary was, by and large, very well done.

The documentary began to falter somewhat, when it moved to the thorny subject of Rhodes the booker, and his firing from WCW by Jim Herd. Rhodes was the head NWA/WCW booker in the mid to late 1980s, who booked himself as the main star and attraction, even when gates started to fall and fans were rejecting him as top babyface. His booking of screw job finishes in title matches (making crowds go home thinking they’d seen a title change, only for the decision to be declared void on the next TV show, was immortalised under the term ‘the Dusty finish’). The tanking of the Jim Crockett Promotions’ business (just as the WWF’s business was skyrocketing) resulted in Ted Turner purchasing the company and renaming it ‘World Championship Wrestling’ in 1988. On the documentary, Rhodes blamed Jim Crockett and his associates’ naiveness in ‘over-spending their budget’. He basically absolved himself of all blame when it came to the shoddy booking of the time period that led to JCP going bust and needing to sell to Turner.

His arrival in the World Wrestling Federation in 1989 was covered. Rhodes signed with the WWF because he needed the money. Seven weeks of demeaning vignettes were filmed, hyping his arrival. He appeared in each of them, playing out the role of the average American, the ‘common man’, if you will. He appeared as a pizza delivery man (wearing a dirty white vest with ‘PIZZA’ written on the front of it in marker pen), a butcher, a gas pump attendant (wearing a dirty white vest with ‘GAS’ written on the front of it in marker pen), a stable hand (shovelling horse manure), a plumber man (cleaning turds out of a blocked toilet bowl, complete with close ups of the blocked toilet), a garbage man, and a taco (Mexican restaurant) waiter. If that wasn’t humiliation enough, Vince then made him wear ring attire covered with yellow polka dots, and he was given a fifty-something, short, rotund, black lady as his valet (Sapphire). Her skin colour would be completely irrelevant, except for the fact that it was clearly ‘part of the joke’; she was picked because the two of them looked absolutely ridiculous together.

The positive spin put on, in recalling these segments, was absolutely breathtaking. It would have made Alistair Campbell blush. The McMahon loyalists like Brisco, Patterson, Hayes, and Pritchard all made a point of saying they initially thought his gimmick was ‘a rib’, that Vince was getting his own back on Dusty for formerly being the head of ‘the competition’ (fancy that!), but of course, it wasn’t a rib, oh no. It was ‘a stroke of genius’ on Vince’s part, because Vince McMahon would never stoop low enough to be vindictive or spiteful. Ahem. To their credit, Jerry Lawler and John Cena both kind of said (although not outright) that the WWF version of Dusty Rhodes was not a patch on his earlier persona in the NWA and territorial days.

The latter segments of the documentary were dedicated to covering Dusty’s brief tag team pairing with his son, Dustin, first in WWF, and then in WCW. The general consensus was that Dustin did a great job as Goldust, but it was never good enough for him to rise out of his dad’s shadow. They also covered their real life split – they didn’t talk to each other for 4 years, for reasons unspecified, but clearly hinted at that Dusty had a major problem of some sort with Dustin’s then real-life wife, Terri Runnels. And basically, that’s how the documentary ended. They brought the story up-to-date by mentioning how Dusty and Dustin had reconciled (around the same time that Dustin and Terri split up, not so co-incidentally), and how Dusty is now working with WWE ‘creative’ behind the scenes.

As a standalone documentary it was interesting enough, but if you knew the real stories behind some of the things discussed, you’d roll your eyes. Some of the things said, and clips shown, were inappropriate. For example, much was said about Rhodes’ booking style. The infamous clip of Robocop on a WCW pay-per-view was shown. That incident occurred in May 1990, the booking of which Rhodes had absolutely nothing to do with, as he’d been in the WWF for 11 months at that point. Rhodes himself also took credit for Ron Simmons becoming the first black world heavyweight champion in August 1992 in WCW, when in fact, Bill Watts was the WCW head booker responsible for that. Rhodes had nothing to do with that decision whatsoever.

There’s a full detailed list of the extras below, but the highlights for me were: Rhodes vs Graham on disc 1, for the whole spectacle of their first meeting. This was the 1977 version of Rock vs Steve Austin; two larger-than-life, charismatic characters meeting head to head in front of an MSG crowd that came unglued. The promos with a young Vince McMahon at ringside, and in an empty arena on disc 2. Also on disc 2, his matches with Ric Flair, Arn Anderson & Tully Blanchard, and the Road Warriors. His WWF matches with Honky Tonk Man, and Randy Savage & Queen Sherri (not great wrestling matches, but classic WWF ‘spectacles’ in front of a large and enthusiastic crowd). Also on disc 3, his 1985 vignettes with Baby Doll, in which she steals one of his horses, is about 15 years ahead of its’ time. His ‘Hard Times’ promo was a classic. For all the wrong reasons, all the embarrassing WWF vignettes, hyping his arrival, are included. Four different Brother Love segments are also included, as are a few ‘interviews with Mean Gene, on the stage in the arena’ and also, strangely, the 1997 ‘Behind the Goldust’ vignettes are included, where he talks about how his dad was never there for him growing up.

Dusty Rhodes & Dick Murdoch vs Dick the Bruiser & The Crusher

As a whole package, I recommend it. Some parts of the documentary are flawed, and the tone of it is kind of sad towards the end. But the huge amount of archived footage, classic promos, vignettes and matches more than make up for it.