This summer, movie fans will bear witness to the latest film by director Christopher Nolan. The visionary British filmmaker has only helmed fewer than ten major motion pictures, but with each he has brought an original approach that is greatly needed in a very cookie-cutter, factory-made era of movie making. His next film, the war epic Dunkirk, will be very different in that it is the first Nolan movie based on true events (the World War II battle of the same name). It’s also the first movie of his since 2002’s Insomnia not to feature some kind of a science fiction or fantasy setting. Despite how grounded the setting and circumstances for the movie are, Nolan has described Dunkirk as “a sensory, almost experimental movie” that features minimal dialogue and relies on the sights and (visceral) sounds of war to tell its story. 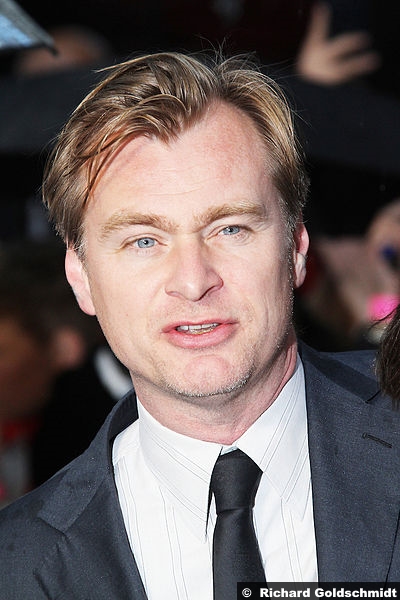 A Nolan movie with minimal dialogue is a big change of pace from his previous outings. Films like The Dark Knight and Inception were gripping and intense, yet featured several long and gripping dialogue scenes. The gritty noir film Memento is almost wall-to-wall dialogue, as much of the story is told to the audience from the internal monologue of the Guy Pierce’s Leonard.

But of all the movies made by Nolan, none has had its many words poured over and analyzed more than The Prestige. The 2006 movie tells the story of rival magicians, dueling over vengeance, ambition and petty jealousy. Much of it is told through the use of diaries written by the two magicians (Christian Bale’s Borden and Hugh Jackman’s Angier). The twist is that each magician wrote his diary with the expressed intent for his rival to come upon it and read it for himself, thus making the words within each journal entirely unreliable. How can Borden trust what Angier writes when Angier knew his words would later be read by his enemy? It makes for a compelling story where you’re never sure if what you’re watching (the visual reenactments of the words of the diaries) is truth or an elaborate fabrication meant to throw another magician off the scent. 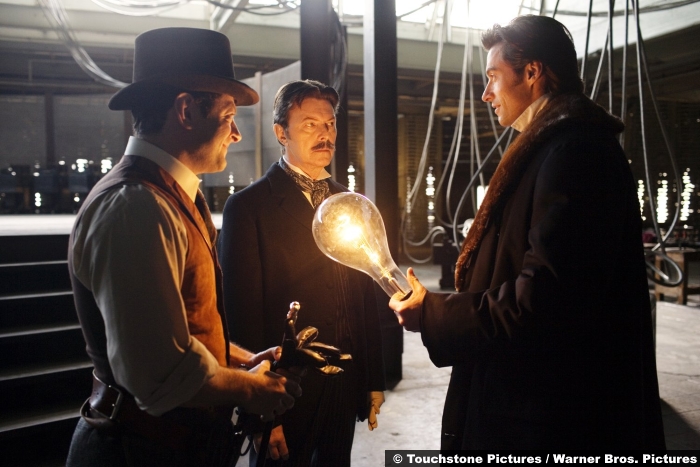 Once it’s understood that you can’t take anything that is said at face value, the movie’s screenplay comes alive. The story, penned by Chris and his brother Jonathan, comes from the 1995 novel of the same name, but is only loosely adapted; the all-important third act especially is original. Unlike many mystery movies, The Prestige is a film that begs its audience to go back and watch again, to see how obvious clues unfold, and how more subtle clues are revealed. Doing that means watching the movie again and again, looking for even more-expertly concealed clues to help unwrap the mystery and discover the truth. Over a decade since its release the movie is still talked about and debated, as fans agonize over every line, looking for some hidden meaning in each word or phrase.

I’m assuming you’ve watched the movie. It’s just a Netflix search away right now. If you haven’t you owe it to yourself to watch it immediately. Once you have, continue on as we try to figure out just what the truth is behind all the lights and magic, and just what it is that Nolan wanted to do with this original and curious story… 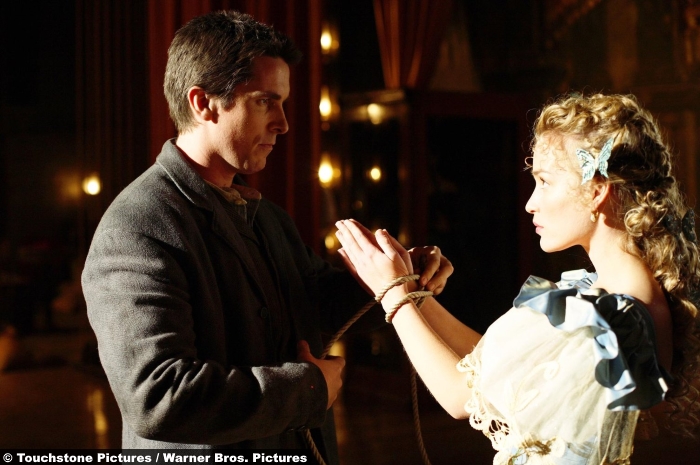 One of the most-debated lines in the film is also one of the last things spoken in the movie. Angier lays bleeding, reeling from the fatal-gunshot wound inflicted on him by his perpetual-rival. With his last words he invites his enemy to look around the basement of the theater, to see the many boxes that reveal how far he was willing to go to win the feud and prove he was the better magician. He spoke of the courage it took to climb into Tesla’s machine each night, saying he never knew “whether I’d be the man in the box, or the prestige.”

It’s strange though, that that line is so often-discussed when it comes to statements that must have a double-meaning. Really, however, that’s one of the most clean-cut lines in the film…

If you go back to the first time Angier uses Tesla’s machine, what he says at the end makes perfect sense. When Angier first switches on the machine, there is a blinding flash of light. After the sparks fade we discover a second Angier standing a few feet away from the original. As he gets a gun drawn on him he cries out, trying to stop his duplicate from firing…trying to reason with himself to no avail; he is shot and then dies. End of scene.

That scene is the movie in a nutshell.

When you boil down the movie’s many little mysteries and surprises, there really is just one big question that needs to be answered: Did Tesla’s machine actually work? And if it did, then the scene where Angier first uses it (and shoots…himself) is presented exactly as it happened, not fabricated in the diary to throw off Borden (who was reading the diary’s account of Angier using the machine). If the machine actually worked (and that’s still an “if” worth debating), there really are only two options: Either (A) the duplicator teleports the original to the other spot and creates a clone in the place where the original stood, or (B) it simply creates a clone in the other spot but the other clone believes he’s the original since all of the original’s memories, thoughts and feelings, etc, were copied over.

On a practical level there’s no difference (as Tesla says “they are ALL your hats”) but on a personal level it matters because someone was going to drown at the end of Angier’s performance each night. At the end of the movie, Angier was pointing out how much courage it took to step into the teleporter/duplicator because he never knew if he, the moment he flipped the switch, was going to teleport…or drown.

Of course ONE Angier would teleport with all of the memories of Angier from his birth. But the clone and the original would both have those memories, so there would never be anyway to know if he was…

1) one man constantly killing cones of himself

2) committing suicide every night while his perfect double reaped the glory in his wake.

The meaning behind Angier’s words at the end of the movie are pretty clear, but the question that spins off from that (is he one man killing clones, or multiple men killing himself over and over) is far more interesting…and unresolved. 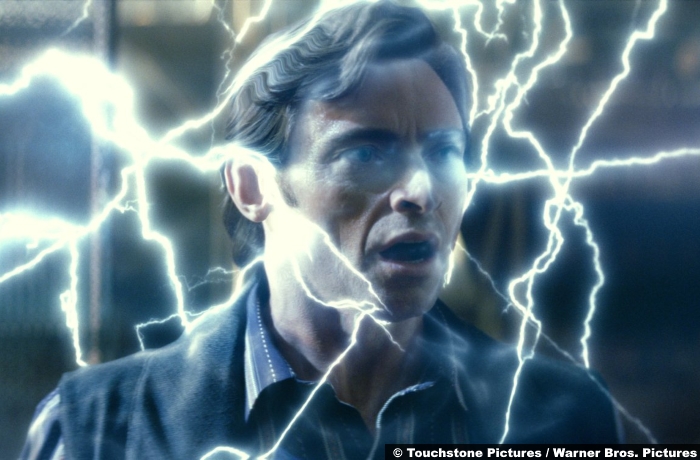 In this writer’s opinion, (A) the machine worked, and (B) it created a clone that was teleported to another location.

Which means that Angier, who is depicted in the movie as the real villain between the two magicians, and who is obsessed with glory and fame, kills himself every night while his double gets to reap the applause.

That’s the perfect ending. Why? Because that’s exactly what Angier wanted to avoid in the first place. Remember that he had already found a way to do his own version of the Transported Man trick; he found a stage actor that looked just like him, Root. The trouble was Root was a drunk who couldn’t be trusted to talk the audience through the trick before it was performed. The most Angier could trust his look-alike to do was stand on stage, smile and bow. And that’s what he did…while the real Angier listened to the tremendous ovation of the crowd from underneath the stage. Granted, it was easy for him to part with Root after Borden discovered him, but still: The glory-hog Angier couldn’t stand taking his bows under the stage (he says those exact words in the movie). What Tesla offered was the chance to be truly teleported, so he could conceivably perform the trick and reap the glory.

It just so happened that the machine also duplicated you, and the “you” who flipped the switch, was not the “you” who teleported to another location. Angier devised a means of killing the “duplicate” so that there’d be no “Roots” running around exposing his “trick” (which is anything but a “trick”), without realizing that he’d be the one dying every time he flipped the switch.

That’s a wicked bit of poetic justice: Angier drowns himself down under the stage while the duplicate, who is created a split second before the original drowns, gets to go on thinking he’s the real Angier…until the time comes for HIS show, the next night, and for HIM to flip the switch…Then he drowns and spends his final moments under the stage.

Some fans complained that Nolan copped out by taking a movie that was at first grounded in reality and simple sleight of hand, and incorporating a fantastical element like Tesla’s “duplicator/teleporter.” Those fans insist there must be another explanation., that the machine must not have worked and that Angier was lying in his diary about it, and that there must be some other explanation for all of the bodies of Angier seen floating in the final shot of the movie.

But that criticism and that search for another answer misses the point: As the other famous line in the movie says,

Now you’re looking for the secret… but you won’t find it, because of course you’re not really looking. You don’t really want to know. You want to be fooled.

In other words, the answer is in plain sight. We don’t want to believe it’s as simple as science fiction, just like Angier didn’t want to believe Bordon’s trick was as simple as having a twin brother. We, the audience, watch The Prestige, and we pour over every line of dialogue, desperate to find the so-called “rational” explanation. It’s the opposite of what happens when we see a magician do a trick: A child sees the trick and asks “how did he pull the rabbit out of his hat?” We, rationally, say “it was always there; hidden.” The child says “no there must be a fantastic explanation!” The child wants to see real magic; we know there’s no such thing.

We watch The Prestige hoping and expecting to see something real. Instead, Nolan pulled a reverse magic trick.