Nancy Drew S01E02 Review: The Secret of the Old Morgue – Give me the mysteries!

If Nancy Drew is going to keep showing us Horseshoe Bay’s most absurd traditions, then I’m really going to enjoy it. I love folk magic, local lore, and regional rituals. I mean, I once dressed up as  “The Lottery“‘s Tessie Hutchinson for Halloween. So it was with delight that I learned about the Seawater Ceremony.

But first, of course, there’s the rather important matter of a murder to solve. Or maybe, two murders to solve. Nancy does, after all, want to find out what happened to Lucy Sable. The fact that she’s now seeing apparitions of “Dead Lucy” doesn’t help, either.

Also, as I mentioned last time, the Tiffany Hudson case seems to have reignited her love for detective work. And the two cases might be connected. On a trip to the Horseshoe Bay police station–an attempt to look at the Lucy case file–Nancy overhears that Ryan Hudson is having his late wife’s body moved out of state for a private autopsy. That certainly seems suspicious, so Nancy wants to get a blood sample before any evidence is lost forever.

Her first trip to the morgue is a bust, though. Things have changed since she was a girl detective. Even the sleepy town of Horseshoe Bay has upgraded its security, for example–using card readers instead of the old locks. So Nancy will have to change with the times. Luckily, she’s got some help. 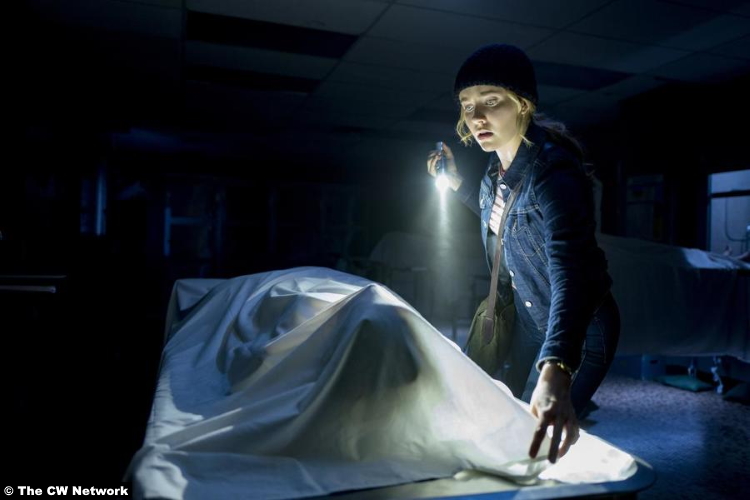 She’s figured out that everyone at The Claw is hiding something, and George’s secret–her ongoing affair with Ryan–is the easiest to guess. Mainly because Nancy sees them together and it doesn’t take Sherlock Holmes to crack that case. Ryan tells George that there’s no big scandal as to why he’s moving the autopsy, by the way. Tiffany was on a lot of medications, and he’d rather not have everyone find out, as they might in a small town.

George and Nancy have it out then, dredging up all the ugly old memories from high school. Nancy seems to know she was a brat back then–hell, she’s a brat a lot of the time now–so she puts George on ice and commences the new plan with just Bess and Ace. They fake a car breakdown to stall the other morgue’s driver while Nancy prowls the HB morgue. She gets the blood sample and the Lucy Sable evidence, but something triggers an alarm. George, however, shows up and spirits all the stuff away, so Nancy isn’t caught with it when the police arrive.

To say that Carson isn’t happy to pick up his teenage daughter from jail is an understatement. But he’s not as furious as he could be, given the circumstances. They talk about his relationship with actual detective Karen (Alvina August) and maybe the honesty prompts Nancy’s next move. She asks him about the trunk with the suspiciously bloody gown.

He claims that it was a prank, a joke that he played on Nancy’s mom to scare her. Uh-huh. What is the gag, exactly? Anyway, he’s obviously lying, which is definitely proven when he later burns the gown. You know, as you do with a joke. 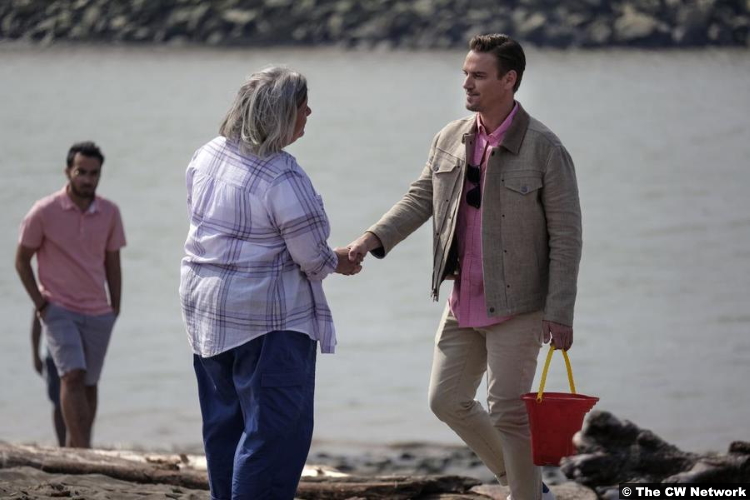 And in the middle of all this is the Seawater Ceremony. The townspeople gather at the beach and fill a bucket with seawater for each home. You put it outside your house and kick it over at midnight. If it’s still seawater, then it’s fine. But if it’s filled with blood, then you’re going to die within the next year. I love this so much; please put it directly into my veins.

Anyway, having snooped around Karen’s desk and gotten the last number Tiffany texted, Nancy is free to enjoy the rest of the night with Nick. He has restored her mother’s classic car for her, even putting in a compartment where she can store her mom’s necklace. It’s really sweet. Unfortunately, Nancy doesn’t know what we know. When she calls the number Tiffany texted, she thinks better of it and hangs up before anyone answers. But not before we see that Nick has a missed call.

That’s probably bad luck, but it could always get worse. Because while Nick and Nancy kick over a bucket of seawater, George overturns a bucket of blood. I’m not sure how this ceremony works, but that can’t be good.

Scattered Seaweeds: Carson tells Nancy that Nick would have never known that Tiffany was the witness in his case, because she testified behind a screen. Clearly they’ve been in contact, though, so what’s up with that? Also, I really liked the scenes between Ace and Bess, especially when he offered to be her “platanchor.” But who is he working for?

8/10 – While not as exciting as last week–I’m not as easily spooked by Dead Lucy as some–I enjoyed this sophomore outing. Give me the mysteries!