The Terror: Infamy S02E05 Review: Shatter Like a Pearl – It’s only going to get worse…

Things are bad and they’re only going to get worse. It’s my oft-repeated phrase from last season and it’s what I thought of when I got a load of Terajima (Taiga Seiya). He’s one of the translators on their way to Guadalcanal to replace Chester and Arthur. And all it takes is one look to tell he’s got a head full of snakes.

Although he’s not currently possessed by evil, Chester’s head isn’t doing much better. He’s obviously grief-stricken, but this is 1943–we’ve fast-forwarded–and they’d just barely stopped using the phrase “shell shock.” So suffice it to say, no one really understands how to talk to Chester. So why not send him to someone who won’t talk? 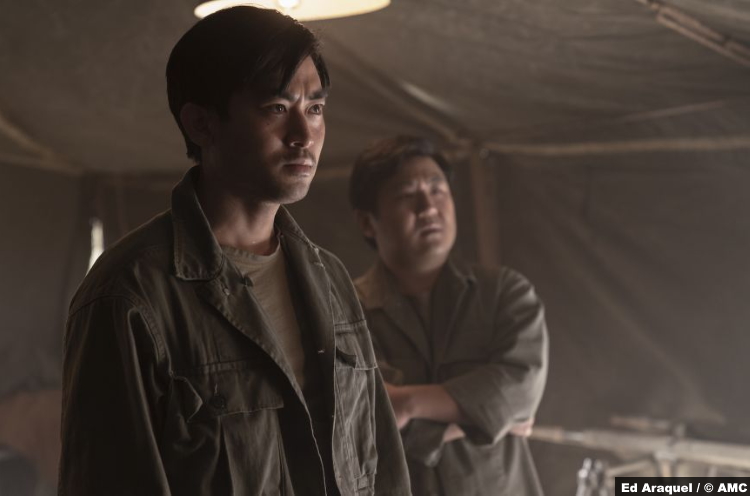 To that end, they’ve got a POW who needs babysitting because the new interrogator hasn’t gotten there yet. What happened to the old interrogator? I’m glad y’all asked. Answer: He’s been detached from his ear. It’s currently in the prisoner’s mouth. Hmm, he seems nice.

Anyway, Stallings just wants Chester and Arthur to sit, not to ask questions–they’re not trained for that. But that doesn’t end up mattering much. When Chester’s the only one the prisoner, Ota (Kazuya Tanabe), will talk to, it just makes sense to let ’em talk. So Stallings does, and what follows is one of the best scenes this season. After a bit of aggressive back-and-forth, they actually talk like men, like men who could be friends. It’s one of those things that reminds you of how senseless war is at its core. We’re all just people, man, I say, in a fog of patchouli.

In the end, Ota gives Chester a bit of biographical info on his commander, the mysterious Takahashi. Then Chester gives him a knife so he can commit suicide. And again, this is the senselessness of war, because this is an act of mercy. 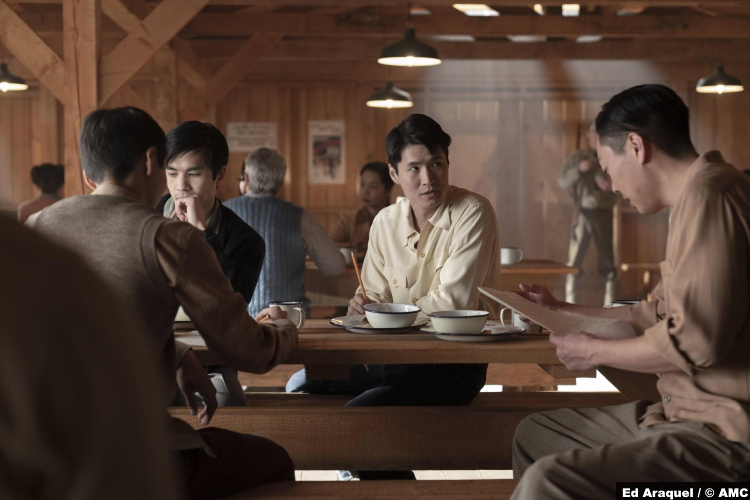 Back at the camp, the biggest buzz is over the loyalty questionnaire being distributed, particularly questions 27 and 28. These questions–will you forswear allegiance to Hirohito and will you fight for the United States?*–are specifically important because answering no to them gets you sent to Tule Lake, the no-no camp. (It was not as fun as it sounds.)

Major Bowen’s also talking about the “no-no boys,” as they were known, possibly being tried for treason. When Amy, who is now a secretary, hears that, she alters her boyfriend Ken’s (Christopher Naoki Lee) form, answering “yes” to both questions. Unfortunately, he doesn’t find out until the no-no boys are scooped up and he’s left there, marinating in their disdain.

Meanwhile, Luz’s dad Bart (Ruben Garfias) shows up. After his son’s been killed in action, it’s unsurprising that he wants to gather his living family closer. But I dunno if I’d call what Luz is “living.” She is, in fact, the ghost woman of the camp now, the one the children dare each other to get closer to. However, she technically has no reason to be in the camp anymore, so she’s processed out. On her way out the gate, Henry hugs her *sniff* and she gives Asako the den-den daiko to return to Yuko. Since it’s been so long (for them) since we saw them last, I wonder how those Yuko conversations went. 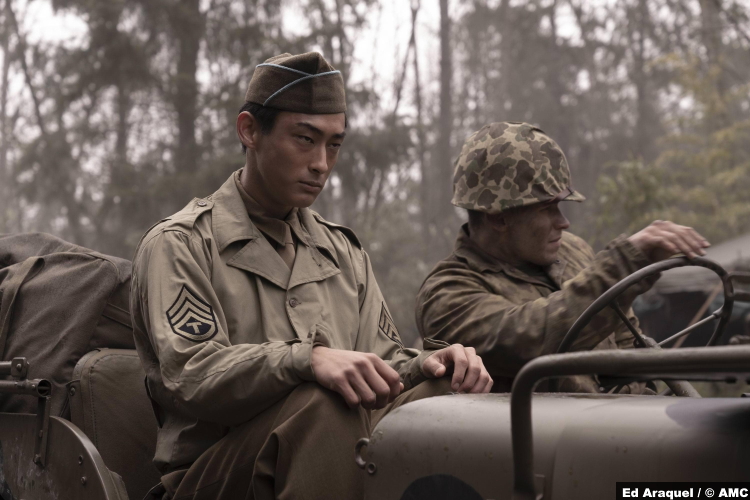 Oh, did someone mention my girl? Yeah, it was me. Terajima, still looking like…that [see above], arrives at the Guadalcanal camp. We’d seen inside his duffel earlier in the episode, and although we’d only gotten a glimpse, it was enough. Mashed-up body parts or something. Anyway, whatever he’s carrying–that ol’ Yuko spirit–quickly transfers itself to Arthur, who forces Chester at gunpoint to go for a drive.

That comes to an abrupt end–it’s hard to drive when a bunch of folks are shooting at your tires–and Chester lays wounded underneath the overturned vehicle. That’s when the duffel bag opens and Yuko, in her truest form, slithers out. I believe you two know each other.

8/10 – While not as spooky scary as last week, this episode did have its high points. But if I could point out a flaw in this pearl, it’s Luz’s characterization. As in, what’s going on with it? I don’t think her purpose in this story is to lose her babies, be sad, and then go away. If it is *patchouli fog forms again* that sucks, man. So I hope they’ve got something else up their sleeves. Christina Rodlo is credited for more episodes after this, so I think they do.

*Sommy, why was the question about loyalty a big deal?: Number one, they resented the idea that they’d have to renounce their loyalty to someone they’d never been loyal to. Number two, the implication in the question is that they’ll renounce Japanese citizenship, which would have made non-citizens stateless, since Japanese immigrants could not become citizens. (And that last part lasted until the 50s.)