The Terror: Infamy S02E04 Review: The Weak Are Meat – Finally, some scary moments!

When Chester left for Minnesota last week, I thought we’d spend a little time there before whatever came next. Instead, nope–we’re in Guadalcanal. For those of you who didn’t immediately shudder–again, y’all are breaking my heart. But if you didn’t know, Guadalcanal the island was the site of the Guadalcanal Campaign, a brutal battle between the United States and Japan that dragged on for six agonizing months. As a translator, though, Chester doesn’t have it as bad.

Or at least he would if it weren’t for malaria, wind gusts, and probable ghosts. Oh, and everything else terrible that happens. He and fellow translator Arthur Ogawa (Marcus Toji) are mostly confined to a tent, where they pore over confiscated documents. Things kick into a higher gear, though, when Sergeant Crittenden (Josh Hudniuk) goes missing. 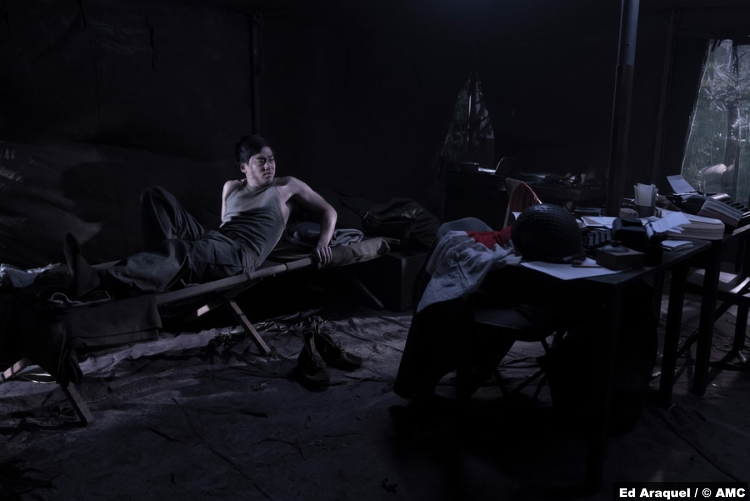 After going through the documents, losing sleep, and having bad dreams when he can sleep, Chester somehow manages to puzzle out Crittenden’s location. It’s a place the Japanese soldiers call Giant’s Door. [I could not find a real-life Guadalcanal location by this name, by the way.]

Crittenden is rescued and retrieved, but that boy ain’t right. He looks like you’d expect a POW to look, but his mind is gone. The white soldiers think he’s just spouting gibberish, but Chester obviously recognizes that Crittenden is speaking Japanese. And what he has to say is unsettling. Besides the title of the episode (“The weak are meat, the strong eat”), he also has a lot of warnings for “white devils.”

This only seems to rile up his fellow soldiers more, so it’s no surprise when they come after Chester one night. But then Crittenden comes after them with a flamethrower. He’s still talking in Japanese about white devils, so it’s not going well for anyone. But at least Chester has his letters from home, and the news that Luz is actually pregnant with twins. 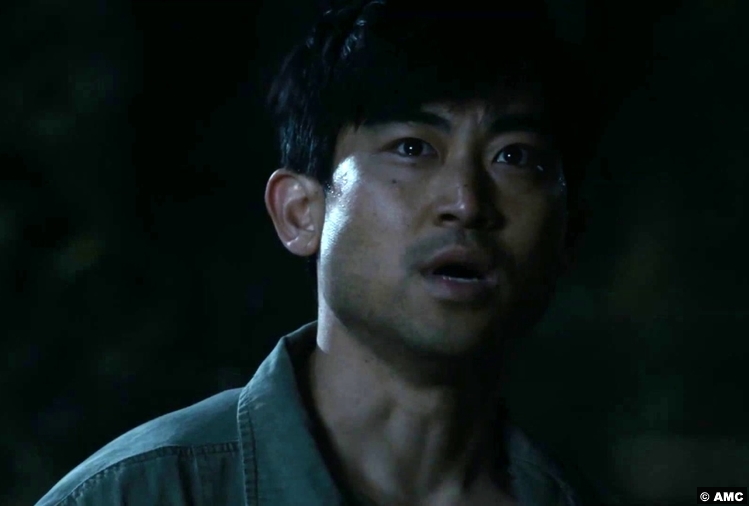 Twins are considered bad luck, but nothing seems to be that bad in the camp at the moment. At least, as far as they know. Luz even manages to win over Henry, who’s been very reticent about her being there. But now he’s super chill, especially since she plans to name one of her babies Enrique (after him).

But trouble is already in the camp, of course, and it works its evil way through. First, a soldier catches the bad juju virus and leaps off a guard tower. Major Bowen assumes the soldier must have gotten into some illicit Japanese-made booze, so he has the camp tossed. A stash is found in the Nakayamas’ barrack*, but it doesn’t really come to anything. They get in trouble and then they don’t, basically. 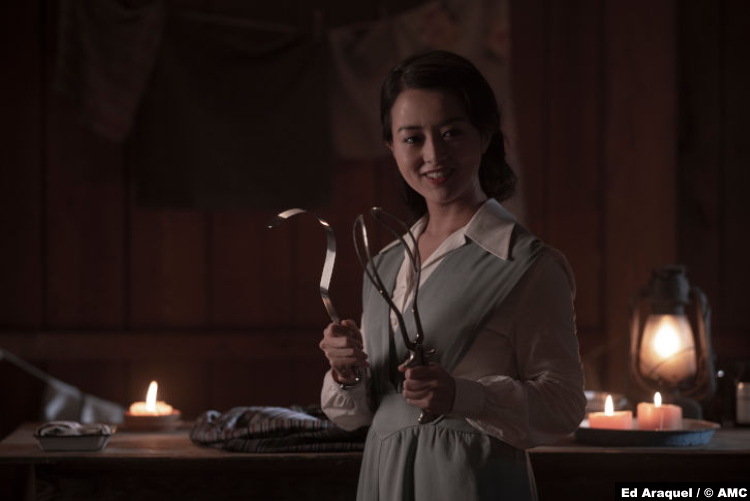 We know, of course, that it’s not booze–the soldier has stumbled upon Yuku in her little hidey-hole. On that note, Luz goes into labor. [Sidebar: I don’t know if the camp timeline matches up with the Guadalcanal timeline, because if so, it feels like Luz is way overdue. She was already pregnant at the beginning of December and it’s August now, at least in Guadalcanal. I’m just saying, if she were pregnant enough to know in December, then she’s reeeeeal pregnant now.]

Henry and Asako take Luz to the camp doctor, Dr. Kitamura (Hiro Kanagawa). They don’t seem to know about her “midwife,” even though Asako was the one who recommended her. Anyway, something goes terribly wrong and neither baby survives birth. It’s all kind of confusing. Like, did Yuko influence this or did Kitamura just crumble under the pressure? In either case, Yuko comes for him. We get a glimpse of what may be her real form and…she needs a better night cream. A retinol, definitely.

Luz is obviously bereft and takes to bed. She does rouse to tell her sort of in-laws, though, that someone should notify her midwife. They’re both like, “Who?” and again, Asako was the one who told her about a “midwife.” Or did Yuko possess me into remembering that?

Luz tells them where Yuko lives and they’re like, no one lives there. It’s such a classic ghost story trope–“…and in the morning, he went back to the house and it’d been vacant for years!” But Asako does, at least, go check it out. Of course, it’s cluttered with storage and empty of life, except for what appears to be part of a scalp. Hmm. Like I used to say in the season 1 reviews, things are bad now and they’re only going to get worse.

9/10 – After the lag of last week, the show smartly splits the action into two locations, so we’re not just at the camp. Not only does that break up the claustrophobic vibes, but it gives us a look at wartime in other places. (It turns out, it sucks all over.) But what I really liked about this episode is that it finally got really spooky. There have been hints of it all along, of course, but there were some (very J-horror-influenced) scary moments this week. I get chills just thinking about Asako going off to that barrack. And then I think, wait–they’re not going to blame Luz for Kitamura’s death, are they?

*I thought, as I mentioned last week, that the barracks were separated by gender, but there were comments in the show this week that indicated that they’re actually separated by family. Of course, in this situation, they’re defining that in a very loosey-goosey way.

And if you’d like to know more about the Guadalcanal campaign, here’s a look back at it by historians and by guys who were actually there.