The Terror: Infamy S02E02 Review: All the Demons Are Still in Hell – I want to cry through half the episode!

On February 19, 1942, President Roosevelt issued Executive Order 9066. In it, he authorized the Secretary of War and anyone the Secretary designated “to prescribe military areas…from which any or all persons may be excluded, and with respect to which, the right of any person to enter, remain in, or leave shall be subject to whatever restrictions the Secretary of War or the appropriate Military Commander may impose in his discretion.”

In other words, he gave the military the go-ahead to detain anyone they chose–so-called fifth columnists, who might be working to destroy the United States from within. This order applied to anyone from an Axis country and so, people of Italian and German descent were also detained. But no one was detained in numbers as large as Japanese-Americans.

As this week’s episode begins, we’ve fast-forwarded a bit since last time, as the Order has already been issued. That means that that Japanese-born citizens, the Issei, have been gone for ’round about two months. And as I predicted last time, someone’s come back for the rest of Furusato.

At first, they’re just shuffled to what seems to be a hotel (?) and they still have some freedoms. At least, Chester does. He’s able to move around the city pretty easily, actually. After thinking he sees Yuko (Kiki Sukezane), the woman who read his tea leaves last week, he stops by the uh, establishment looking for her, for instance. And surprise–the woman running the joint has no idea what he’s talking about. That’s unsettling, of course, but it doesn’t faze Chester as much as it could. He’s already off asking his professor why his photos are mysteriously blurry in parts and visiting with Luz. Luz, by the way, is sporting a very noticeable bump, so she didn’t take the mugwort and whatever the other thing was. 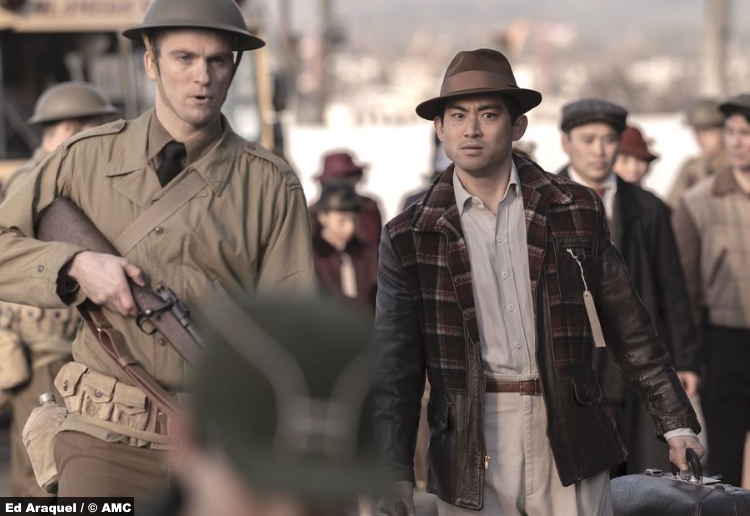 This does faze Chester, so when they’re all being moved to the next place, he picks this spectacularly wrong time to tell his mom he has a pregnant girlfriend. There are no funny moments in this episode, but that came close. Anyway, he then leaves the line and goes to see Luz again.

She’s been working at an orphanage (and living there since her dad kicked her out). When Chester returns, she’s upset because some military guys came by and snatched up all the Japanese kids. Like, even the babies, because who knows what they could be plotting?!

And she couldn’t help herself. She just had to ask. So that’s how she found out that her baby will be taken as soon as it’s born. After that, it’s a pretty easy decision to go with Chester. Unfortunately, though, they don’t get far. Chester’s rounded up by the FBI, and as Luz is now carrying an enemy of the state–I say, sarcastically–she tags along. They’re taken to rejoin Chester’s mom and Toshiro Furuya (Alex Shimizu), whom the Nakayamas have taken in. They, like the rest of the community, are being kept at a horse track. Specifically, each family gets their own stall. 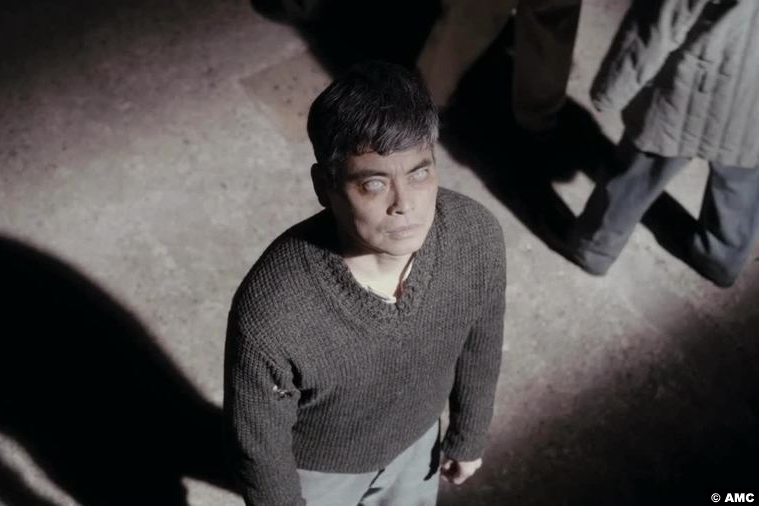 Of course, the men taken last episode, including Toshiro’s and Chester’s dads, aren’t exactly havin’ a blast, either. They’re either being interrogated, worked, or exercised. Unsurprisingly, some of them are starting to become paranoid. They’re particularly suspicious of young Nick Okada (Kai Bradbury). It seems like every time he pays attention to someone, that someone disappears. The older men start whispering to each other about the possibilities of shapeshifters and ghosts.

What they don’t know, of course, is that the spooky threat is back in California. I’m speaking, by the way, of Yuko. One day at the track, Wilson Yoshida (James Saito) spots her and seems to recognize what she is. He yells for Chester–not his own son, mind you, but Chester–to get away. Then he’s thrown through the air. As soon as he gets up, he steals a soldier’s weapon. Is he possessed, like Hideo seemed to be when he burned out his retinas? We don’t get much of a chance to find out, because other soldiers shoot him dead. Yuko, bleeding from the head, looks on dispassionately. 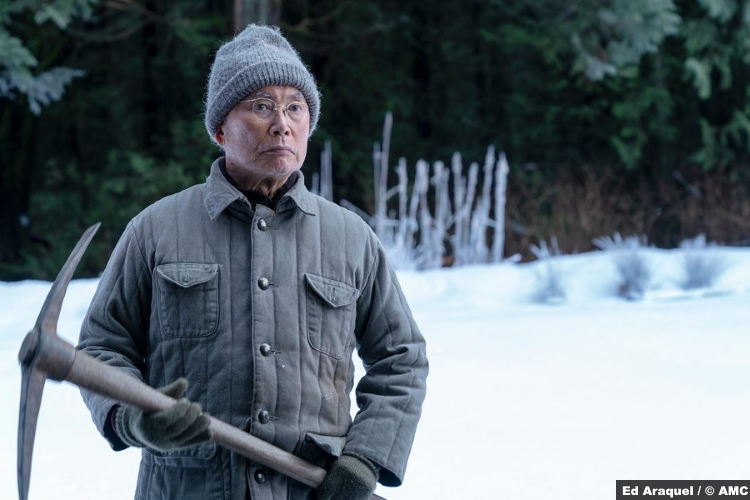 Back in wherever they are, the older men are sent to ice-fish. And they are not thrilled when Nick tags along. Earlier, they’d almost dismissed their obake and yūrei talk, but out here on the ice, they see an opportunity. So they just straight-up ask Nick if he’s spooky. Nick, understandably, has no idea what they’re asking. As they point out all the men who’ve gone missing–all the men who’d been marked by Nick–they begin to break the ice around him.

And he cracks, too. Of course, he’s not a ghost or a shapeshifter. He’s a fed. He’s supposed to be ferreting out spies, but he can’t identify any, so he’s just been making them up. So they end up leaving him stranded out there, with the farewell that maybe this place’s spirits will protect him.

But they’re in old Dakota, and the spirits have no love for him here.

8/10 – It’s a little hard to balance the scariness with the fact that I kinda wanna be crying through half the episode. Like when they were executive ordering the toddlers? Oh, my Lord. But then again, that kind of thing–the idea that you can just be living your life and then the government can come along and uproot you out of it, even if you’re A BABY–is another kind of terror. It all combines to produce an undercurrent of constant dread, which is highly effective. I almost don’t need the threat of Yuko, but I do wanna know her deal. Finally, I’d like to call out the cinematography for this episode–that shot of Nick on the ice was breathtaking.

PS: If you’d like to know more about what being interned was like, check out the Order 9066 podcast. It’s from the same company–APM Reports–that also puts out the excellent crime podcast In the Dark.